The commander of Russia’s strategic missile troops, Colonel-General Nikolai Solovtsov, said that Russian specialists were working on a new heavy strategic missile, which would be similar to the RS-20 Voevoda missile (Satan according to NATO’s classification). 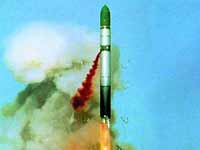 Strategic missile builders of the Russian Federation intend to create a new type of the missile, Solovtsov told Interfax. In addition, the working lifespan of the RS-20 intercontinental ballistic missiles will be extended to 30 years, the official said. The Russian president approved the adequate decision, the official noted.

Russia will decline the modernization of strategic arms only if the United States gives up its missile defense plans. The law about the ratification of the agreement between the government of the Russian Federation and the Cabinet of Ministers of Ukraine about the prolongation of the working lifespan of 15 П 118M missile complex was signed in the beginning of 2008. The law was subsequently passed by the Russian parliament (State Duma) and approved by the Federation Council. The agreement was signed February 21 in Moscow.

It was the RS-20 missile that the USSR developed in response to the American Strategic Defense Initiative Program (SDI), Solovtsov said. The missile has no analogues in the world.

The confirmed working lifespan of the two RS-20 modifications makes up 25 and 21 years. It is technically possible to extend the life cycle of RS-20 missiles at the design bureau in Ukraine, where the missile was originally developed during the Soviet times.

The Satan missile complex is made in cooperation between Russian and Ukrainian enterprises. Russia’s missile troops currently have about 80 RS-20 missiles at their disposal.

The RS-20 intercontinental ballistic missile is a liquid-fuelled heavy class missile. It is capable of carrying ten nuclear warheads at a distance of up to 11,000 kilometers. The missile can be used to strike vulnerable objects and typical targets. It can be outfitted with a dispensing warhead containing ten individually guided nuclear blocks to strike several targets. The heavy RS-20 missile weighs 211 tons. The missile is capable of overcoming missile defense systems .

Russia is ready to decline the program to modernize its strategic arms only if the USA does not deploy the global missile defense system, Nikolai Solovtsov said.

Russia ’s strategic missile troops have always been following the nuclear deterrent policy since the moment of their establishment in 1959. The troops appeared in response to security threats under the global opposition between the two superpowers.

Russia has no ideological reason for the opposition now, Solovtsov said. “We are not going to frighten anyone as we realize the plans to develop the strategic missile troops. We simply follow the reality of today,” the general said.

It is an open secret that the USA plans to deploy elements of its missile defense system in Europe. In addition, the US administration does not exclude a possibility to deploy a part of the system in space.

The US signed the agreement about the deployment of the missile base on August 20, 2008. Russia responded immediately with a promise to deploy its Iskander missile complexes in the Kaliningrad enclave.