Many observers say that there will not be a major confrontation held during the presidential election in Russia on March 2. First Vice Prime Minister Dmitry Medvedev will most likely replace Vladimir Putin on the top state position. Putin in his turn will chair the government. 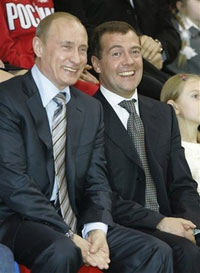 However, it is still unclear who will chair the Board of Directors of Russia’s natural gas giant Gazprom. It is Dmitry Medvedev who takes the position at the moment. If he becomes Russia’s next president he will not be able to stay at Gazprom. It is worthy of note that Gazprom’s administration will have to approve the new list of candidates to its Board of Directors on February 4. The annual meeting of Gazprom’s shareholders is slated to take place on June 27.

Gazprom’s Board of Directors consists of ten people. Four of them represent the state structures, four others are from Gazprom itself, and the remaining two act as independent economists. The list of candidates is longer this year, spokespeople for the gas monopoly said. It counts 42 names as opposed to 26 in 2007.

Like it was mentioned above, Dmitry Medvedev will not be able to combine two positions of the president and the chairman of the Board of Directors of Gazprom. However, Vladimir Putin will have a full right for this, experts say.

It is not ruled out that Vladimir Putin may thus become Dmitry Medvedev’s successor at Gazprom.

There is another variant to solve the problem. A source close to the presidential administration said that Aleksey Miller, the incumbent chairman of Gazprom’s Board of Directors, may take the position. The chairman of the legal department of the company, Konstantin Chuichenko, will become his successor in this case.

The inauguration of Russia’s new president will take place in the beginning of May, when the new head of state officially takes office. Consequently, Dmitry Medvedev will be able to remain the chairman of Gazprom’s Board of Directors before May 2008.

Gazprom is the largest Russian company. Gazprom is the biggest extractor of natural gas in the world With sales of US$31 billion in 2004. It accounts for about 93 percent of Russian natural gas production; with reserves of 28,800 km3, it controls 16 percent of the world's gas reserves (as of 2004, including the Shtokman field.) After acquisition of the oil company Sibneft, Gazprom, with 119 billion barrels of reserves, ranks behind only Saudi Arabia, with 263 billion barrels, and Iran, with 133 billion barrels, as the world's biggest owner of oil and oil equivalent in natural gas.

By the end of 2004 Gazprom was the sole gas supplier to at least Bosnia-Herzegovina, Estonia, Finland, Macedonia, Latvia, Lithuania, Moldova and Slovakia, and provided 97 percent of Bulgaria's gas, 89 percent of Hungary's, 86 percent of Poland's, nearly three-quarters of the Czech Republic's, 67 percent of Turkey's, 65 percent of Austria's, about 40 percent of Romania's, 36 percent of Germany's, 27 percent of Italy's, and 25 percent of France's. The European Union as a whole gets about 25 percent of its gas supplies from this company.

Apart from its gas reserves and the world's longest pipeline network (150,000 km), it also controls assets in banking, insurance, media, construction and agriculture.