The conflict between Russian and British authorities continues to exacerbate. The office of the British Council in Russia’s Ekaterinburg has been closed. Another office of the Council in St.Petersburg was closed yesterday too, although the organization intended to resume its work there today. It did not happen, though: the office door is still locked. A sign hanging on the door says that the British Council in St.Petersburg was closed due to actions taken by Russian authorities. 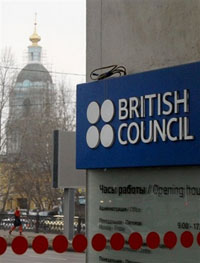 Experts are interested in consequences, which the conflict may lead to in diplomatic relations between Russia and Britain. Several Russian newspapers wrote with a reference to sources from Britain’s Foreign Office that England may deport the Russian Ambassador from London if the conflict continues to develop. If it happens, Moscow will respond in a similar way, which will virtually mark the end of relations between the two countries.

Britain has already started to negotiate with its allies in NATO and the European Council to develop its decision regarding the conflict. The current situation is highly important and responsible for Russia too. Observers say that it may go about the first large diplomatic conflict with the West that Russia may have since the Soviet era. PACE chairman Rene van der Linden stated that he was going to participate in the regulation of the problem.

An anonymous source from Britain’s Foreign Office told reporters that London was not going to aggravate the situation with the British Council in Russia further on.

Martin Davidson, the British Council chief executive, said that his organization would continue working from its Moscow office for the welfare of 250,000 Russians. Davidson added that the Russian administration was making a big mistake connecting the issue with political discrepancies between Moscow and London.

Russia ’s Ambassador to Britain, Yury Fedotov, has recently visited the Foreign Office in London. Peter Ricketts, the head of the British diplomatic service, criticized the methods which the Russian authorities used to close offices of the British Council in Russia. The British official was obviously talking about Russia’s Federal Security Bureau which interrogated Russian employers of the British organization.

To crown it all, the head of the St.Petersburg division of the British Council, Stephen Kinnock, was arrested for driving under influence on January 16. The British side said that the incident had a hidden political motive because Kinnock had had only a glass of wine.