The demise of logic, sanity and innocence. Part II 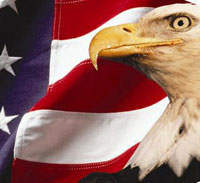 The demise of logic, sanity and innocence. Part II

The degeneration of logic, sanity and innocence has caused enormous chasms in the smooth configuration of normal life and in this chapter we cite three more logic deficient frustrations which society appears unwilling or unable to cope with.

Recent years have taught us a great deal concerning the seasoning that can be cultivated within the meaning of words, in particular words that have been used by this administration to promote its agenda, while purporting to provide up front truth for the matter under review. The word "Victory" comes to mind along with its mirror image "Mission Accomplished", words which were punctuated by the infamous and absurd farce of this President masquerading as a fighter pilot while emerging triumphantly from a passenger seat. It was not, however, totally illogical to use the word Victory in that context, since there was the appearance of a victorious military conclusion in the classic sense of the word, though far from the absolute Victories achieved by Generals MacArthur or Eisenhower.

Years have elapsed since the carrier embarrassment and the word Victory nevertheless continues to be uttered as if it had not been used in the first instance. We are therefore compelled to assume that, having previously achieved victory, the war we are now fighting must be a new undeclared war, one that began seamlessly as the original was being presumptuously terminated.

Logic might suggest to the White House occupants and their many compliable Senators that, for historical purposes, the current conflict in Iraq cannot have victory as its objective, since that has already been certified. A new desirable objective should now logically be targeted, a word more in keeping with current conditions, a word that is seldom heard in the White House, and that word is PEACE. This word, regretfully, was assumed by the White House intellectually sterile proponents of war to be an automatic reward for victory, while forgetting or ignoring potential recriminations based on the legendary actions of the invaded French in World War II, with an underground movement known as "La Resistance".

It has become increasingly evident to a strong majority of caring people that the inevitable process for peace in Iraq is to get the uninvited mercenaries and their accompanying armies out of the cities and off the streets and highways, as a preliminary step to getting back to their homes and families where they belong, and let some of the world's oldest societies find their own ways to deal with their problems which have plagued them off and on for close to fourteen hundred years. These problems will not be solved by the administration's retinue of successive imperious generals, and bands of undisciplined enforcers.

Even in a civil war, the militant factions of Iraq would be unlikely to be the cause of more deaths in the future than have been directly or indirectly caused by Americans to date. One thing is clear. The Iraqi could do no worse than we have been shown by the imported brains that have supervised the creation of the current insanity, and we ask, Where is the logic in expecting that the willing perpetrators of such an incomprehensible disaster could possibly find sufficient resolve and wisdom to contain this inferno, which they have themselves kindled and fanned to ashes?

In 1789 a Second Amendment was added to the U.S. constitution after considerable debate and fine-tuning. The context of the times is ably reflected by these words inWikipedia :"The "Militia Clause" gave Congress control over the militia with the States retaining authority to appoint officers and to impose the training specified by Congress. To ensure that the militia could not be disarmed under any pretext, the right of the people to keep and bear arms was guaranteed in the Second Amendment".

The leaders of the individual States realized that a strong central government was essential to the peaceful governance of this newly formed nation, and it needed to be supported by a strong military. Each State then had its own "Militia" which was a cross between the State police of today and the National Guard, and problems kept flaring up between States though kept reasonably in check. It was agreed to form a strong military backed central Government and the second amendment was enacted for the express purpose of ensuring that each State would maintain its legal right to defend its territory against a possible intrusion by any radicalized future central government. It reads as follows:

"A well regulated Militia, being necessary to the security of a free State, the right of the people to keep and bear Arms, shall not be infringed."

That is all of it. There is nothing else. The Gun addicted aficionados of the U.S., ably supported by the gun Barons who make them and their well-heeled lobbyists, have for years read and interpreted the words of the Second Amendment in a manner clearly unlike the meaning and intent of the legislators. They specifically dispel the comma after the word "State" and substitute a period for their purposes, hoping that no one will notice and ignoring grammatical correctness. They follow-up by reading this amendment as having two separate sentences, but that is not how it was written or intended. They further interpret the words," the right of the people" as the right of citizens or the right of individuals or the right of people, which is false. "The People" is a term universally recognized as denoting an assembly of persons, of individuals, in a common cause or regulated assembly, and that was the intent.

Moderates believe that every responsible person should have a weapon to suit the needs of his activities. It is in reality a "right of tradition" but it is not a right conferred by the second amendment which itself must be amended, or clarified, in order to specifically confer that right while limiting abuse. It is perhaps not generally realized that the second amendment was written about 50 years before the invention of the Colt revolver, and 80 years before the first Winchester. It is possible that the Constitution has a lot of catching up to do.

The world may eventually come to a sordid end, but there is every reason to believe that humans will be spared the experience, since all human life may by then have self-exterminated carrying with it much of animal life as well. For billions of years earth has managed to survive, while passing through assorted whims ofnatureand supporting and destroying many of life's numerous experiments, but man has seriously interfered with nature's normalcy and we are beginning to see and live the dawning of earth's ominous response. We have taken from the earth its combustible materials and consciously transformed them into poisonous polluting gasses, which have risen to the top of the world and hang above us as a modern day "Sword of Damocles". We have compromised our breath of life and created a fatal imbalance in the higher reaches of earth's atmospheric protective shield, and humanity's penalty may render redundant its historical tradition of massive self-mutilation.

Coal is the major atmospheric pollutant, but since its use is utilitarian and it is under industrial control, there is little that individual users can contribute. Gasoline is the next prime offender representing 20% of all oil production usage worldwide with jet fuel accounting for another 5%. Of the 85 million barrels of oil produced daily in the world, 21 million are used in the United States, incredibly, a number which equals the next 6 users combined, and 45% of the U.S. oil is converted into gasoline, the second most dominant source of atmospheric pollution. These disproportionate figures indicate that close to half the earth's atmospheric pollution through the burning of gasoline, originates in the U.S. but in this case, some self-satisfying options are available to caring and conscientious citizens.

It is simplistically evident that automobiles of lesser weight can operate with smaller engines and thereby consume less carburant. Logic in this case hits an impenetrable wall. The American notorious obsession with anything that is bigger and stronger found willing allies in the U.S. auto industry and unwavering support in the oil industry whose executives have their own lockers at the White House. By common consent gas-guzzlers became the "vehicle du jour", and any young man who did not conform had better possess other attributes to confirm his masculinity.

Avoiding an overflow of technical details we would however make the point that the truck industry benefits from the development of automatic transmissions with up to 20 speeds, which makes it possible to propel a mastodonic vehicle at extended highway speeds, using engines barely larger than that of a high-end American sedan or SUV. Logic would suggest that considerable reduction in the use of petrol could be realized by the use of small engines coupled to a transmission with a much greater number of speeds, without reducing the American buyer's cherished size preference. It is a compromise surely worthy of a trial.

Recently, a small step was taken by raising the available speeds to 6 in some cars, but before rejoicing at these companies' newly found sense of responsibility, it should be noted that even these cars are being tuned and marketed for greater performance with no compromise on power, and not for any improved gas mileage. Currently America uses 21 million barrels of oil per day but produces barely 9 million. The reduction of this oil dependency factor, is a most desirable political objective for the U.S. and this plan could potentially close the gap by perhaps 4 million barrels a day, and coupled with important planned production increases in the friendly confines of the Alberta tar sands, it is conceivable that the U.S. could close in on oil independence, while simultaneously advancing the environmental cause.