Attack on Iran: Morality lost in the garden of deceits

Cry "Havoc," and let slip the dogs of war (Julius Caesar Act III, Scene I). The call for war against Iran was issued by no other than Mr. Bernard Kouchner the foreign minister of France, a country with the motto of Liberty, Equality and Fraternity. France the home of Voltaire and Rousseau is now calling for war against a country that has never threatened France or its neighbours. France a nuclear power with illustrious colonial past is urging others to be aware of the dangers that nuclear weapons pose. 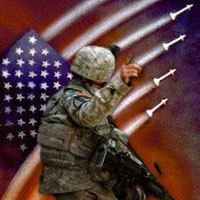 Attack on Iran: Morality lost in the garden of deceits

From the other side of the Atlantic we hear the same cries for more war, death and destruction. As though the death of 650,000 Iraqis was not enough, we are urged to prepare ourselves for another war. We are told that by killing more civilians, creating more refugees, destroying more bridges, power plants, schools, hospitals and factories we are going to be safer and live better lives.

Recently Mr. Greenspan told us what we already knew: namely that Iraq was invaded because of its oil. This of course was not the first time that we heard this and it certainly will not be the last either. But who cares? Here we see President Bush and his allies illegally attacking and destroying a country, making millions homeless and starting a civil war without a slightest sign of remorse. They went to steal the natural resources of Iraq and they did it and are doing it. And now they want more. Yesterday it was Iraq; tomorrow it will be Iran and the day after it will be Venezuela. When the president of the world’s only superpower acts like a thief, what protection is there for the rest of the world? The very same people that brought us the Iraq tragedy are using the same excuses to repeat their misdeeds again.

In late August, “Iran and the Vienna-based International Atomic Energy Agency released a plan laying out a step-by-step timetable of cooperation with the goal of resolving by December issues that have been under investigation for four years. Agency officials have praised the timetable as a breakthrough and Iran’s president, Mahmoud Ahmadinejad, on Tuesday said the investigation into his country’s nuclear activities was now closed.”

This agreement was hailed as a success by the IAEA and UN. The problem with this agreement is that it takes away the excuse needed by Bush and Co to implement their strategy of strangling Iran and get their hands on Iran’s oil and gas. Naturally, just like the case in Iraq, they have dismissed the agreement saying that it was not enough. Then the talk of war intensified, with US, Israel and then France talking loudly about an eventual attack on Iran. The main aim of these shrill voices is to take the people’s attention away from the IAEA-Iran agreement and back to some illogical talk of Iran’s threat to the world.

It is said that if you tell a lie big enough and often enough, people will eventually cometo believe you. Having used this tactics in Iraq with some success, they believe they can do it again. They believe that people will eventually come to believe that Iran is a serious threat to the world and grudgingly accept another war. And the good thing about this is, so they believe, that this time they don’t even have to produce any evidence of wrongdoing by Iran. They just have to say that they have prevented Iran from acquiring nuclear weapons in the “future”. Very logical, isn’t it?

The fact that these same countries posses lots of nuclear weapons is irrelevant, so we are told. We are to believe that Israel, Pakistan, India, US, UK, France, China and Russia are all exception to the rules. Other countries that enrich Uranium are also exceptions. It is only Iran with its vast natural resources that is a danger to the world peace and prosperity.

Israel has over 200 nuclear weapons and last year was involved in one of the most savage attacks on Lebanon. She also recently bombed Syria. Yet we hear no protest from the so called “civilized world”. Pakistan, a dictatorship, with its tremendous security problems (Taliban, Al Qaeda, etc) has nuclear weapons and is awarded F16s. India tested nuclear weapons and was awarded trade and nuclear technology transfer agreements.

What is the moral lesson from all this? There is none; the law of the jungle rules. Those who can steal will steal. Those who can rape will do so with impunity. There is no punishment for the strong; it is the weak that has to pay. Meanwhile we pretend to believe all their lies and keep hoping for cheaper oil and higher share prices; otherwise we have to face our own complicity in their crimes. After all who elected them and who re-elected them? Our very silence makes us an accomplice.

As you read this you should think about all those Iraqis that have been killed, the 2.5 million Iraqis that had to flee the carnage in their country and a similar number of internal Iraqi refugees. You should think about all the lies that you have been told and ask yourself these questions: do I want another incident like Iraq? Can I stay silent and accept more killings and destruction? Is it OK for the powerful to commit armed robbery?

If one finds it difficult to answer these questions, then perhaps one should follow what Bertrand Russell said: “We have, in fact, two kinds of morality side by side: one which we preach but do not practice, and another which we practice but seldom preach”.

Dr. Abbas Bakhtiar lives in Norway. He is a management consultant and a contributing writer for many online journals. He can be contacted by e-mail at: [email protected]