Under any norms of international law, culpability for crimes committed is a fundamental precept. In the case of Iraq, the worst crimes in the book have been committed – mass murder, war crimes, wanton vandalism, state terrorism, targeting civilian structures with military hardware, rape, child murder, torture and the wholesale destruction of a state in an illegal act of butchery planned by the clique of corporate elitists which gravitates around the White House and which, with Tel Aviv, dictates the foreign policy of the US of A. However, the finger has as yet been pointed at nobody as the international community, gripped by a monumental attack of cowardice, examines its navel. 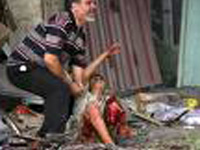 In 2003, Iraq was a relatively peaceful country, the streets were relatively safe and the Government of President Saddam Hussein distributed resources evenly among the population. The only rupture of the peace was the occasional terrorist attack by NATO aircraft.

Then came Colin Powell’s lies at the UNO building, the magnificent foreign intelligence (a ten-year-old British doctorate thesis copied and pasted from the Internet), the war machine behind and around the Bush regime slipped into gear, the UNO was sidestepped because it would not give its backing to another of Washington’s illegal wars and the invasion was launched.

Just over four years on, what is the state of Iraq today? In June 2007, 1.241 civilians lost their lives in the violence. In July 2007, the figure increased to 1.650, while the US armed forces registered their second lowest casualty rate ever – just 70 troops, but still over two per day, every day, out of a total of over 3.600 troops since the invasion was launched.

In just one day, August 1st, 70 civilians were killed and over 100 wounded in three bomb atacks in Baghdad. Eight million Iraqis are now in urgent need of emergency assistance: 4 million in dire need of food aid and humanitarian assistance, over two million internally displaced persons (IDPs), many with nowhere to go and over two million refugees in Syria and Jordan – according to Oxfam’s recent report “Rising to the Humanitarian Challenge in Iraq”, the “fastest-growing refugee crisis in the world”.

43% of Iraqis live in “absolute poverty”, woman’s rights have all but disappeared – those who venture out without a veil can be raped or decapitated in broad daylight – only 60% of the citizens needing food assistance have access to it, the unemployment rate is now over 50%, child malnutrition has risen from 19% (during the NATO-led terrorist attacks and the inhumane blockade in the 1990s) to 28%, meaning that around one third of Iraq’s children have insufficient food.

Two million people have no home, no work, no income and over half of the IDPs have sporadic access to nutrition. 70% of Iraqis are without adequate water supplies, 80% are without basic sanitation and 40% of Iraq’s qualified personnel have left the country.

Who is to blame for this catastrophic situation? In any civilised state of law, if someone bursts into another’s home, kills his family, rapes his wife, destroys his property and hands out billionairs rebuilding contracts (without tender) to his friends, due legal process is performed, there is an accusation, a trial and a judgement.

Quite how invisible or absent any culprit is in this case, speaks volumes about the absence of a state of law in the international community at the beginning of the third millennium. The United States of America and its allies which perpetrated this shocking act of state terrorism should be held responsible, their leaders charged with the string of crimes that have been committed and brought to justice.

If not, future generations will look back with incredulity at one of the darkest ages ever for international law and common norms of human decency.