Japan: Time to act like members of the international community

Time to get civilised

How many Japanese people have rightly complained about being the only victims of nuclear terrorism (when the USA selected civilian targets to commit acts of mass extermination during WW2)? But what about the cruelty meted out by Japanese whaling fleets? Who is raising this issue in Japan? 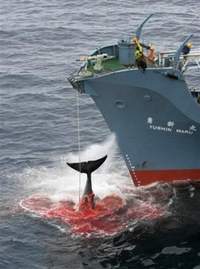 “If we can imagine a horse having two or three explosive spears stuck in its stomach and being made to pull a butcher's truck through the streets of London while it pours blood into the gutter, we shall have an idea of the method of killing whales. The gunners themselves admit that if whales could scream, the industry would stop for nobody would be able to stand it.”

This was the message written by a ship doctor some fifty years ago about the cruelty involved in killing whales. Today, half a century later, the Japanese whaling fleet continues to use explosive grenades to kill whales, against all international norms, in the Southern Ocean Sanctuary's protected waters.

The International Whaling Commission prohibits the practise of killing whales for food, but allows limited killing for research purposes. As this article is being written, the Japanese whaling fleet is killing some 900 minke whales in a protected maritime sanctuary, for “research” purposes. Nine hundred whales.

Japan has also announced that it will hunt fin whales and humpback whales, classified as an endangered species.

This continued, cynical and disrespectful stance by the Japanese authorities, which allow this practice to go on against international norms (the Japanese government has been referred by the IWC no less than 41 times for breaches) puts into question whether Japan is serious about its position in the international community.

After all, is not what we see today on the seas a continuation of the disgusting, perverted and cruel practices meted out to prisoners of war fifty years ago? It appears that little has changed after all.

15:00
Up to 16,000 Ukrainian soldiers entrapped in Luhansk People's Republic
14:53
Expert explains what caused the 'firework' above Azovstal
13:28
Azovstal falls: 265 Ukrainian fighters leave steel plant and surrender
13:06
Moscow says Finland and Sweden's entry into NATO will 'untie' Russia's hands
12:53
Kremlin declared the United States hostile to Russia
21:11
Ukraine blows up ammonium nitrate to accuse Russia of chemical attack
17:46
Ukraine can skip Membership Action Plan on its way to NATO
17:34
Azovstal militants reveal how many days they can hold out
16:47
Russia and Ukraine reach agreement to evacuate wounded from Azovstal
16:12
Expert says why Kyiv was interested in nuclear weapon before Russian operation started
World
Chechnya thanks the West for the weapons supplied to Ukraine