Why did it take so long?

It was not surprising to discover that George W. Bush chose to illegally spy on American citizens

I only have one question: Why did it take so long? In previous Pravda.Ru articles (Bush vs. Hitler, The Great American Treason, Articles of Impeachment and Indictment for High Crimes and Misdemeanors, The Death of the Bill of Rights, Parts I and II, and others), I warned of the clear and present danger the Bush dictatorship represents to America's form of government, to the Constitution, to the check-and-balance system, and to freedom and democracy itself. I discussed the signs that more Americans should have seen - signs which indicated that Bush and those in his dictatorship were (and are) depraved megalomaniacs so enamored with power that they were willing to defy the will of the American people by stealing not one, but two elections; that Bush himself was/is a sadist who reveled in executing people while governor of Texas, yet had the audacity to call himself “pro-life”; that Bush, Cheney and other fascists in their dictatorship were/are cowards who bluster with bellicosity while America's young die in an illegal war, yet who used their families' wealth, power and influence to avoid serving in combat themselves; and, finally, that Bush and/or those in his dictatorship were mass-murderers and traitors for orchestrating, through act or omission, the attacks of September 11, 2001, and then exploiting the fear these attacks generated to destroy the Bill of Rights and undermine the basic freedoms Americans had once taken for granted. 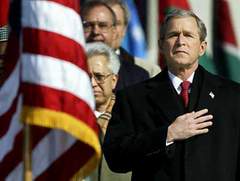 I also stated in past Pravda.ru articles that American history is actually a pendulum of overreaction and regret. The Alien and Sedition Acts endorsed by America's second President John Adams; the Alien and Espionage Acts abused by President Woodrow Wilson during and shortly after World War One; the internment of Japanese-Americans during World War Two; the excesses and paranoia of McCarthyism in the early 1950s; the illegal COINTELPRO operation of the late 50s and early 60s, when the Federal Bureau of Investigation (FBI) encouraged perjury, false imprisonment, violence and murder to silence political dissent; the alliance of the Central Intelligence Agency (CIA) with organized crime figures in attempts to assassinate Fidel Castro; Richard Nixon's use of federal agencies in an effort to deport John Lennon, whom he feared would harm his chances for reelection; and J. Edgar Hoover's disgusting attempts to encourage Dr. Martin Luther King Jr. to commit suicide, chillingly illustrate how zealously those in the American government, particularly its executive branch and/or unelected officials, will violate the Constitution and ignore the very essence of justice, freedom and democracy when it interferes with their self-serving agendas.

Because of this cyclical pattern of American history, it was not surprising to discover that George W. Bush, not satiated by the destruction of civil liberties he accomplished through the innocuously sounding “Patriot Act,” chose to illegally spy on American citizens. One lesson of COINTELPRO affirms that whenever courts rule that those in government cannot engage in an activity legally, they will simply engage in such activity illegally. This doctrine is so well entrenched that even the man described as America's “top law enforcement official,” Alberto Gonzales, has avidly endorsed torture, detentions without charge or trial, and illegal spying, while hypocritically feigning “offense” when dealing with sexually oriented materials.

Therefore I was pleasantly surprised when, on the holiday celebrating the birth of Dr. King, former Presidential Candidate Al Gore forcefully and courageously denounced the evils of the Bush dictatorship. Gore stressed that while overreactions to real or perceived national emergencies in the past were eventually countered by the realization that the “cure” was actually more dangerous to democracy than the “disease,” he also warned that there may come a time when the pendulum stops swinging. If this happens, governmental abuses and contempt for fundamental rights and freedoms will become a permanent part of the American landscape.

Shortly after Gore's speech, Senator Hillary Clinton said that the years of the Bush dictatorship will be remembered as one of the darkest periods in America. The veracity of her statement has been consistently confirmed by history. Tragically, tyrants often get to enjoy undeserved prestige and power during their lifetimes. But history, albeit belatedly, does seem to eventually recognize their evil: Pontius Pilate is not remembered as the all-powerful ruler of Judea, but the despot who crucified a gentle soul from Nazareth named Jesus, whose name is now revered by millions throughout the world; J. Edgar Hoover, who during his life enjoyed a sterling reputation as America's top “G-man,” has now been exposed for the vicious racist he was, while one target of his wrath, Dr. Martin Luther King Jr., is now honored with a national holiday; Richard Nixon will forever be known as the corrupt liar who resigned from the presidency in disgrace, while the voice of John Lennon, the man he desperately sought to deport, still brings hope and inspiration to millions throughout the world.

But, as Gore said, we cannot wait for history to pass judgment. It isnot an exaggeration to declare that the very essence of America's government is at state. The Bush dictatorship has blinded far too many Americans with fear, duped too many into supporting an illegal war, and eroded too many fundamental rights in the name of “freedom.” It is time for the American people to demand impeachment proceedings, so criminals will no longer occupy the White House, but the jail cells where they belong.