How many times have we heard that filthy lie, "It's for your own good," as politicians and their owners overstuff their pockets and fat stomachs at your expense?

Well, the other boot has finally dropped, and embedded in the rears of America's working families. We saw it coming; the first thud was a pro-big-money overhaul of bankruptcy procedures that forces single mothers and workers unemployed by federal free-trade sellouts to pay off their debts, even if they can't buy groceries for their children. Debtors are forced to pay for indoctrination classes, even if they are disabled or lost their jobs, where they are given a restructuring plan to pay back debts after being 'allowed' a small amount for monthly living. 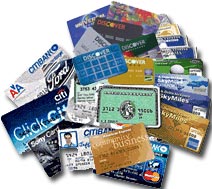 In factoring what your cost of monthly living is, you now cannot subtract what you spend on food, transportation and clothing, but must use limits that the IRS imposes, allowing them to rule what you 'truly' need to live on with the same generosity they show elsewhere in their tax forms. "Too bad," says the Fed, eager to suck up to the financial giants that give Congress-critters massive campaign contributions and cushy retirement jobs.

The second boot-thud is from the "federal regulators" issuing "guidelines" that credit card issuers are pretending are mandatory statutes forcing them to ignore all previous contracts and starting January 1, 2006, to charge double the minimum monthly payments for all credit card balances. Want to know who these regulators are? They're said to be the Board of Governors of the Federal Reserve System, Federal Deposit Insurance Corporation, Office of the Comptroller of the Currency, and Office of Thrift Supervision. Try finding the list of governing board members on any of these sites. Although they're paid with our taxes, they're as elusive as Mafia dons. Their new 'guideline,' which will often double minimum credit card payments, will drastically affect many household budgets. And they don't care.

It doesn't matter that the Federal Reserve System is unconstitutional, never authorized by our Founding Fathers. It doesn't matter that the FDIC is illicit, nor has anyone heard of the manufactured "Currency" and "Thrift Supervision" bureaucracies. They apparently exist only to bolster financial mega-institutions and be a beard for Congress. Like Governor Jeb Bush of Florida, Congress pretends it has no control and also whines, "Our hands are tied, our hands are TIED!!" All that matters is that credit card companies are tripping over themselves to obey this new and unconstitutional 'guideline' that is pseudo-law.

You can bet the ranch that banks are now raising their second mortgage percentage rates for desperate families seeking to recover cash flow to buy such luxuries as food, utilities and gasoline.

Most credit card companies have been sending to consumers replacement credit cards with new terms hidden in the unreadable fine print, saying that they can charge whatever they want and raise the minimum payment to whatever they want. After all, they own all the politicians, regulators and judges. If you're one-day late paying them, your currently low interest rate can immediately jump to as high as 29 percent. Statistically a majority of people forced to suddenly pay hundreds more per month will fall into making at least one late payment, then be hit with a huge rate increase as well as fat late-payment penalty fees per incident.

It doesn't matter that you had a contract with the credit card companies to only pay a certain percentage, the Fed says you need to double your payments, "for your own good." How many times have we heard that filthy lie, "It's for your own good," as politicians and their owners overstuff their pockets and fat stomachs at your expense? NAFTA, GATT/GANN, and all the free trade legislation was 'for our own good,' and now after bleeding literally MILLIONS of jobs from this country, the Fed is performing the coup de gras, the final cut to the jugular of the already weakened, castrated bullock that is America.

Gasoline prices, home heating supply prices and now credit card prices have all been weaponized by doubling them, intentionally crippling American families so that they protest less the infamy and tyranny so glibly issuing from the federal government. Weakened people living from hand to mouth, barely existing from payday to payday, won't have the energy to fight far worse terrorists than fundamentalists with guns. It's not an accident that the Fed can now access all your financial, medical and employment records without probable cause nor warrant. Americans who said nothing against the PATRIOT Act, allowing the Fed to abuse the rights of imaginary terrorists have themselves become terrorist suspects and now have almost no rights themselves. What goes around, comes around. And boy, has this ten-ton omelette settled on our faces.

The rich and privileged in our government and big banks don't have a clue how most working American families exist. Sure, the minimum credit card payments prior to 1/1/06 are slower to pay off the principal, but taking an extra $200 a month from families will force many to choose between food and warmth or further debt. Those families who are out of money and out of true representation in federal government will see monstrous late fees and credit card interest rates soar to as high as 29%. It becomes clear that the Federal Office of Thrift Supervision and the other federal tines on this antichrist's pitchfork are not trying to clear consumer debt, they know full well that these outrageous 'guidelines' will definitely INCREASE it. They know that this will cause the tens of thousands of newly impoverished families to crawl to the same government parasites, begging them for relief.

Not only does the new bankruptcy laws force poor people to pay their credit card debt at their higher rates and all late fees, it especially makes it easier for landlords to evict bankrupt tenants who are behind on their rent. The courts now permit you to be evicted more quickly and easily, giving you less chance to recover after a few months. Where are you going to live next without a deposit, without a reference and without a snowball's chance? You saw what happened to the Hurricane Katrina evacuees. Now look in the mirror and see the next victim.

We Irish Americans have heard all this before, from our grandparents who were or knew victims of the Black and Tans that brutally evicted without mercy young families, allowing the men, women and little children to die of exposure. For the love of money is indeed the root of all evil.

Bankruptcies are up 50% more than in 2004. With the doubling of credit card minimum payments based on a guideline, not law, we can expect them to triple. Some observers are saying that the banking institutions who own the Fed intentionally forced up natural gas and gasoline prices and then administered their planned death blow of doubling credit card payments. It seems that they want to confiscate homes across America, especially those with low-interest mortgage rates that are limiting their profit potential. After repossessing homes of thousands of families, they could be marketed with much higher interest rates.

Those wage-garnished and/or evicted citizens that think that they can appeal to a judge in court will find the same pro-government judicial advocacy that lives in the hearts of the traitors on the U.S. Supreme Court. The majority of the justices ruled in Kelo v. City of New London that government can take any property it wants if there is a profit potential to government in yet more taxes. And their owners, the big financial institutions, can evict and confiscate homes from hapless families that could not pay double for their new 'guideline' that is being enacted as if it were law.

What can anyone do if they find themselves backed into a corner, finding themselves decimated by this illicit guideline? Some are saying to not play their game, as in not paying for indoctrination courses, or even filing for bankruptcy, since the deck is so stacked against it. After all, you're screwed for seven years anyway.

What would happen if five million people suddenly stopped paying on their credit cards at all? After all, the card companies broke their original contract, not so? And where in the Constitution is such actions by the Fed or by the banks authorized? Because if it isn't specifically authorized in the Constitution, such powers remain with the spineless States.

Americans have lost all respect for our federal government, for our courts, for our laws and especially for our pretend laws. All are unconstitutional, not that you will ever find a judge that will agree.

Credit card agencies that intentionally issue large-limit accounts to consumers that they damn-well know cannot pay are now trying to steal even the crumbs of the cake. Like government, they are socialists who always live at the expense of others and will one day face Judgment by Almighty God.

In the meantime, we will be canvassing each Congressional and Senatorial representative to see if they will put a stop to this outrage. If not, we will put a stop to their cushy careers and have a 'guideline' written that they cannot accept further money or retirement jobs from any agency that contributed to their campaigns. For starters.

Keep kicking any dog and he will eventually bite your leg. That's a lesson that the Users in our society have forgotten.

I hear many families plan to "Just say NO!" to usurious megacorporations that have sucked them dry. If they can't handle the double payments and the  whopping interest rate penalty increases, they will just let the credit card companies pay $400-an-hour lawyers for five million court appearances trying to collect the uncollectible. Meanwhile the government will pay greater amounts for court resources, all for a 'guideline' that benefits a few of the rich by exploiting all of the poor.