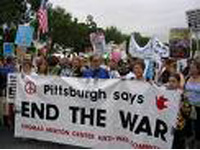 Just over four years ago, the Bush administration launched a savage and illegal attack against the sovereign state of Iraq. Claiming that Saddam Hussein “stiffed the world”, the Bush regime launched its “shock and awe” campaign to win the “hearts and minds” of the Iraqi people, based on forgeries and lies that Iraq had WMD. Hundreds of thousands of deaths, and two hundred billion USD later, the same regime is now arming militant resistance groups it was fighting against less than six months ago. Is the USA winning this war?

The tangible results of this, the greatest disaster in Washington’s foreign policy since the VietnamWar or the many examples of state terrorism in the failed attempts to assassinate Fidel Castro, are disastrous: the destruction of a State, occasioning hundreds of thousands of deaths, the targeting of civilian infrastructures, the handing out of billionaire rebuilding contracts without tender to White House insiders, the murder and torture of illegally held prisoners, rape and deployment of weaponry against civilians – war crimes.

The pathetic excuse that Iraq was linked to 9/11 fell on thin ice basically because it was never true: Saddam Hussein kept Al Qaeda out of Iraq; George Bush put Al Qaeda into it. Even on the execution stakes, Bush comes out a winner, having signed 152 death warrants against Saddam Hussein’s 148.

The outcome is, as predicted, disastrous. The removal of the balance of power has given rise to a regime in Baghdad controlled by political Islamists, who trampled on the women’s rights gained under Saddam Hussein, a moderate in terms of the Arab world and no less democratic than the majority of states around the Gulf and North Africa. The outcome is that women are not free to walk out of their homes without a veil, people are terrified of being killed when they go out to buy bread, corruption among government officials is rife, workers are shot at if they try to strike, garbage is piled high on the streets of Baghdad and the Government is restricted to the Green Zone of the capital.

The State has collapsed, having descended into a 6-tier myriad of warring races, religions, factions, tribes, clans and families, while the international media now talks about civil war and the US military complain that for every single action it takes, the insurgents respond threefold.

The occurrence of murders and outrages on a daily basis is witness of an absence of policing or control and in the four months since the Bush regime’s “massive security operations” was launched, US casualties have risen every month, the last two being the deadliest since the beginning of the war (230 deaths in April and May).

The insurgency is reinforced by those who would give their lives to fight against the Americans from the four corners of the Islamic world, it changes tactics every fortnight, has a huge supply of car bombs and hundreds of IEDs (Improvised Explosive Devices) which can pierce the armour of any of the American vehicles. As the American troops announce victory, the fact remains that casualties are ever higher and the insurgents are being reinforced, daily, in Baghdad.

The country, once cohesive, is now fragmented into three sections based on religion/race (under Saddam Hussein religion was a private matter and never a question of conflict and many families were mixed, while the Kurds had a substantial degree of autonomy): the Islamic Army (Sunni), the Mahdi Army (Shiite) and the Islamic State of Iraq (Al Qaeda).

Washington has managed to waste 200 billion USD of its tax-payers’ hard-earned cash on this disaster, has spent around 5 bn. USD on a think tank to work out how to combat IEDs since January and intends to spend 4 bn. USD more on the same think tank until the end of the year. Nine billion dollars to ask: Where do we go from here? And now, folks?

So we may ask, after having warned the US Government of the consequences of his adventure months before it started: Is the USA winning the war?