Lisbon dedicated to Our Lady of Fatima

Image of Our Lady of Fatima in Lisbon for third time

The image of Our Lady of Fatima, where the Virgin Mary appeared on six successive months in 1917 and confided three secrets to three shepherd children, came to Lisbon on Saturday 12th November to lead a procession to commemorate the International Congress for the New Evangelization. 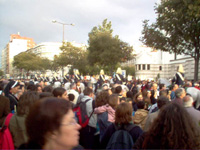 The only other times when the image of Our Lady of Fatima was brought to Lisbon were in 1942 and in 1959.

The Cardinal Patriarch of Lisbon, Dom Jose Policarpo, celebrated a mass in Lisbon's Church of Our Lady of Fatima, after which the image was led through the streets of the capital in a huge procession attended by thousands of people, waving white flags and holding candles, praying the Rosary and singing hymns.

The last time the image left Fatima was in 2000, when Pope John Paul II dedicated the Third Millennium to Our Lady of Fatima. Today, the city of Lisbon was dedicated to her protection.