The imperfection of the monetarist model

The capitalist-monetarist model is imperfect. To cloak its imperfections, its exponents try to cover up the imbalances it creates through lies and hypocrisy, while at the same time continuing to perpetuate the failed model at the expense of developing nations. 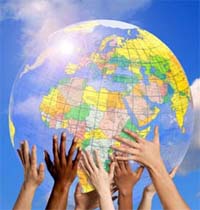 One of the basic precepts of the capitalist-monetarist model is that the equation begins with a constant factor of endemic unemployment, which in turn creates grave social problems, as exclusion turns into marginalism. The other constant factor is that the wealth and means of production will necessarily be controlled by a restricted elite.

In the case of the United States of America, this restricted elite gravitates around the White House, dictating foreign policy and asking for wars so that the Pentagon can give out contracts for equipment tried and tested on the battlefield, destroying infrastructure  so that billionaire contracts can be handed out, without public tenders. The Bush regime is perhaps the epitome of the capitalist-monetarist model's failures, as we can see in our world today.

However it is not only in official foreign policy, which substantiates the system, where this model has serious failings. It is in the composition of the basic formula itself. While the countries which expound this model preach free trading practices in the World Trade Organization, do they actually practice what they preach?

Or do they levy import duties on goods entering their economic space and dole our subsidies to make their own products cheaper, then use these situations as leverage during negotiations with developing countries, forcing them to open up their markets, allowing cheaper goods produced under more efficient production systems (with the aid of tariffs and subsidies) to flood local markets?

Such is the case today, for example, faced by Kenya, which stands to see a drop in its GDP of 2% because cheaper EU goods are about to flood local markets after 2008, rendering large swathes of the population in a number of economic sectors redundant. The hypocrisy in the model creates the need for unfair trading practices which go against every grain of the philosophy of free trade and market oriented economies. In fact, from what we see today, we can conclude that such a notion does not exist, because the countries which claim to adopt this model cannot make it work.

What happens next? Desperate for jobs, the recently unemployed are forced to turn elsewhere for a work market in developed countries where, as long as there are jobs available which will pay more money than a person from a Less Developed Country can make at home, will provide a job market.

What do these countries do? After centuries of colonising other lands, they slap on restrictive immigration policies, which make desperate situations even more desperate,because if there is a workmarket(and there always will be given the ageing populations of the developed nations and the imbalance in the etarian pyramid), the immigrants will continue to flow in, either legally or illegally. Restrictive practices force the situation underground, making the traffickers richer and more powerful.

These criminal elements are able to corrupt the societies in which they live by buying favours, while they turn their activities to other areas which corrupt their societies even further. High society in most western countries is rotten to the core. Compare for example the situation in Eastern Europe regarding drugs, crime and pornography before and after 1989.

Given that the capitalist-monetarist model is based on an obsession with the bottom line, not only has everything to reduce costs, it also has to show a profit, because those who control the means of production are looking at the margins.

This has serious consequences, eventually, for the healthcare systems, which degenerate into a payment-first type of treatment and in the education systems, so strapped for cash that they are wholly inflexible and cannot cope with the strains caused by sociological needs.

Let us take, for example, the situation among the children of immigrants – not immigrants – in Europe today, where the education systems of a number of countries have failed in their duty to integrate these children. The silent majority do not react but the handful of those who explode into violence are a reflecrtion of the desperation felt by these young people, living half-way between two cultures and without any hope of ever integrating into either.

Finally, an example of the continuation of the mentality rife in the capitalist-monetarist countries which created and practised slavery and colonialism, in 2005. The Wildlife Conservation Society, based in New York, has just decided to impose a blanket ban (together with the government of the Republic of the Congo) on hunting all species of game in concession areas for the country’s largest timber company.

This means that the nomadic forest-dwelling Baka people are starving to death, while a few kilometres away game meat is easy to find in restaurants. Timber before people. This is the epitaph of the capitalist-monetarist model, which started with slavery, has continued throughout its existence perpetrating acts of mass murder, invasion of foreign lands to steal their resources, and a lying and hypocritical method of keeping the lie on the road.

This system is flawed from the start. The Marxist-Leninist model tried in the USSR proved that an alternative is possible, although certain elements need to be introduced into the model to ensure its functioning at all levels of society. Yet the Soviet Union is a shining example that such a model could indeed be the future of Mankind.