Whenever I see images of George W. Bush, Dick Cheney, Karl Rove, Alberto Gonzales, Condoleezza Rice, Donald Rumsfeld, Paul Wolfowitz, Katherine Harris and other minions of, or apologists for, the corrupt, inept, mendacious and venal Bush dictatorship, I am immediately reminded of this line from John Carpenter’s classic horror movie Halloween: “What is living behind [their] eyes is purely and simply evil.” 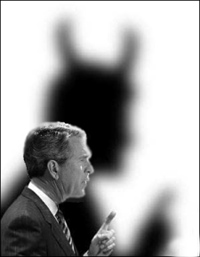 Yet in America there is a great reluctance to use the term “evil” when describing the cabal of thugs, hypocrites and war criminals who stole the White House in 2000 and 2004. Although singer/activist Harry Belafonte courageously proclaimed a few years ago that the Bush dictatorship was “possessed of evil,” it wasn’t until recently that others in positions of prominence began to acknowledge the veracity of Belafonte’s statement. A recent episode of the animated comedy Family Guy, for example, showed cartoon portraits of an inanely grinning Bush shaking hands with Saddam Hussein, Osama bin Laden and, ultimately, the “Super Devil” (a being more evil than Satan).

Prior to this, most of the statements concerning the inherent evil of the Bush dictatorship came from foreign sources: Russian President Vladimir Putin indirectly suggested that Bush’s foreign policy was analogous to Hitler’s Third Reich; Venezuelan President Hugo Chavez compared Bush to Satan; and the Mayan Indians felt compelled to “spiritually cleanse” a sacred site after Bush visited it earlier this year.

But even though more Americans feel emboldened to criticize the Bush dictatorship, there is still a reluctance to acknowledge and denounce its evil. This reluctance often affects some of the dictatorship’s most outspoken critics: Former American President, and Nobel Laureate, Jimmy Carter recently retreated from his clearly accurate assertion that the Bush dictatorship has been the worst administration in United States history, claiming his words were “careless or misinterpreted.” And syndicated columnist Gwynne Dyer rejected the notion that Bush and/or his minions possessed the evil required to orchestrate the attacks of 9/11, even stressing that Dick Cheney was morally incapable of sanctioning the murders of over three thousand Americans simply to justify the illegal invasion of Iraq.

I disagree. While the Bush dictatorship is the domicile for many monsters cloaked in human attire, Cheney is arguably the monster most likely to promote mass murder for the sake of war profiteering. His very character endorses this reality. He possesses the attributes of many mass murderers—a sadist who often kills defenseless animals in “caged hunts” (where they have no means of escape), and a coward who, during the Vietnam war, obtained deferment after deferment to avoid facing an adversary capable of shooting back, only to become a vociferous warmonger once the prospect of being drafted into military service no longer confronted him.

But even if one does not subscribe to the theory that character presages deeds, the Bush dictatorship still cannot be absolved from culpability in the 9/11 attacks. In the legal realm, crimes can be committed through act or omission. It is undisputed that Bush, shortly after his coup of 2000, planned to invade Iraq. It is also undisputed that several warnings about the possibility of airline hijackings, some provided by foreign governments, were forwarded to the Bush dictatorship.

What most likely occurred was that Bush and his minions were aware of the planned attacks, but underestimated their magnitude, believing any hijacking would be of the “traditional” variety: An American aircraft would be forced to fly to an unplanned destination, followed by a lengthy standoff between the hijackers and the Bush dictatorship. Allowing a hijacking to occur would give Bush the opportunity to blame Iraq, and incite the American media and public into a jingoistic frenzy.

One explanation may be the “arrogance syndrome.” Americans want to believe they are somehow more “civilized,” and therefore less gullible, than other nations of the world. Unfortunately this belief simply makes them more susceptible to being led into unjust and illegal wars. Also, since many Americans possess short-term memories as selective as the one possessed by Alberto Gonzales (America’s corrupt attorney-general, who recently answered “I cannot recall” over seventy times during his testimony before Congress), they can be duped into supporting such wars time and again.

Although most corporate-controlled media now refer to the illegal invasion of Iraq as an “unpopular war,” just a few years ago these same media were salivating at the ratings and profit potential this war would bring. Reporters and entertainers who criticized, or even questioned, the motives for war or other policies of George W. Bush were fired from their jobs and oftentimes blacklisted. Pro-war rallies drew record numbers of people, and these rallies frequently treated war criminals like Bush, Cheney and Rumsfeld as deities.

Another reason why evil is rarely acknowledged in America is simply because too many powerful people profit from it. Sadly, this has been the case throughout history.

A recent movie, Amazing Grace, recounted how British politician and abolitionist William Wilberforce often invoked the tenets of Christianity during his campaign against the slave trade in the early 1800s. This compelled many so-called Christians to embrace the film as a paradigm of how good can triumph over evil.

Forgotten in this zeal, however, is the sad reality that many Americans used (and in the case of racism continue to use) the Christian faith to justify bigotry and slavery. American abolitionist Frederick Douglass, in his book The Life of an American Slave, describes how a preacher/slaveholder often justified the whipping of his slaves by stating, “He who honors his master must wear his stripes.”

Today it is America’s military-industrial complex that profits from economic slavery and the exploitation of the poor and middle-class, who fight and die in wars waged by the rich and powerful. And as long as those in power can reward their cronies with lucrative rebuilding contracts, as long as war can be used to divert attention from government criminality and corruption (as demonstrated by the father of George W. Bush, who invaded Panama to divert attention from the “Savings and Loan” scandal that cost taxpayers billions of dollars), and as long as war can be used to increase the ratings and profit potential of the corrupt corporate-controlled media there will be little incentive to denounce evil in America.

A third reason for the failure of Americans to acknowledge evil in their own country is the uncanny ability of human beings to rationalize anything. When I was in law practice, I often noticed that there was little difference between “law breakers” and “law makers.” Both demonstrated an enormous capacity to rationalize their actions, no matter how much those actions defied morality or commonsense.

The incentive to rationalize is particularly prominent in today’s “sound bite” culture. Corporate-controlled media incessantly select the most “controversial” statements for repeated airplay, often taking them out of context. Meanwhile complex topics, if they are covered at all, are covered only superficially; therefore laypeople often do not have the political or historical background necessary to develop well-informed viewpoints, and thus erect their opinions on tenuous foundations that are frequently devoid of facts.

For example, a recent editorial on the CNN website argued that Americans would be remiss if they failed to honestly debate Texas Congressman Ron Paul’s contention that American foreign policy, particularly its proclivity to dominate or overthrow foreign governments for the sake of corporate profits, played a role in the build-up to the 9/11 attacks.

But it is unlikely that such a debate will ever transpire, particularly since former New York Mayor turned presidential candidate Rudy Giuliani has already demonstrated that he will continue to exploit the emotions surrounding 9/11 for his own self-aggrandizement, just as he has opportunistically done in the past.

The final explanation for why the existence of evil in America is often ignored is because the terms “good and evil” often take one into the realm of religion. When science and logic fails, faith often prevails.

But faith can be a positive force or negative force. Since it cannot be disproved, a person does not require logic or science to acquire faith. But without such logic or science, people can often be deceived into believing concepts that have no factual basis at all. Hating another person because of his/her skin color, for example, is as illogical as hating one flower because it’s red and loving another because it’s yellow, particularly since neither possessed the ability to choose what color it would be. Yet racism is alive and well in America.

It was this type of faith that made many Americans embrace the lies of the Bush dictatorship, naively believing that Iraq possessed “weapons of mass destruction,” that Saddam Hussein was involved in the 9/11 attacks, and that war against Iraq would only be used as “a last resort.”

This exploitation of faith has been the modus operandi of the Bush dictatorship and its apologists—strategically designed to conceal their ineptitude, arrogance, dishonesty and evil. It has been so effective that many so-called “Christian” colleges and universities have invited members and supporters of the Bush dictatorship, including Bush himself, to be guest or commencement speakers.

Since I began this essay with a quotation from a movie, I will end it with one as well. In Bryan Singer’s remarkable film The Usual Suspects, a character named Verbal Kint remarks, “The greatest trick the devil ever pulled was convincing the world he didn’t exist.” Sadly, this trick will continue to be effective as long as Americans refuse to acknowledge that their nation is being controlled by people who are “purely and simply evil.”