Where is the most dangerous place in the world to live? Is it Iraq, or perhaps Sudan? No, it is in the mother’s womb. More people are murdered through abortion than through any other source. A few days ago Mexico became one of last holdouts to fall under the spell of this evil that is gripping the world. 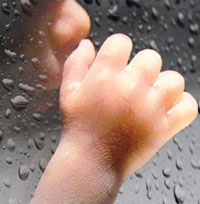 On a superficial level, we may be convinced that legalized abortion has not really changed much in our private lives and in the life of our societies. It all takes place in the silence of an operating room which ensures the woman’s safety. And it is as if the foetus that will never see the light of day had never existed.

However, the recognition of the sacred character of human life and of its inviolability - a principle admitting no exceptions - is not some trivial little problem or a question that may be considered relative, in view of the pluralism of opinions we find in modern society. There are no "small murders". The respect for every human life is an essential condition if a societal life worthy of the name is to be possible. When man’s conscience loses respect for life as something sacred, he inevitably ends by losing his own identity.

Today, in many people's consciences, the perception of the gravity of abortion has become progressively obscured. The acceptance of abortion in the popular mind, in behaviour and even in law itself, is a telling sign of an extremely dangerous crisis of the moral sense, which is becoming more and more incapable of distinguishing between good and evil, even when the fundamental right to life is at stake. The moral gravity of procured abortion is apparent in all its truth if we recognize that we are dealing with murder. Given such a grave situation, we need now more than ever to have the courage to look the truth in the eye and to call things by their proper name, without yielding to convenient compromises or to the temptation of self-deception.

To claim the right to abortion and to recognize that right in law, means to attribute to human freedom a perverse and evil significance: that of an absolute power over others and against others. This is the death of true freedom.