Why we escaped from Australia

I would like to tell you what happened to my wife and I after we did a common family search in Sydney (Australia) where we were living at the time. This is a story about the tricks, so called democracies, use to suppress or hide corruption and crimes in the highest places. 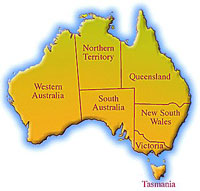 Why we escaped from Australia

We have escaped recently from Australia because of Secret Police harassment that has been going on for many years. For people overseas that think that the Western countries have freedom and democracy, I have bad news: it's only propaganda and lies. The Secret Services powers are enormous. They have a lot of collaborators who hold very important positions in the Public Services including Schools, Broadcasting, Legal and Judicial bodies. This is the image of today's Australia but I think it reflects the same scenario in Western Europe. One of the reasons that pushed us to leave Australia is that despite the facade of democracy and openness there was no body or Institution that was interested in hearing our story or offering help. The print media and broadcasters are simply not interested because 2 or 3 media barons control every print media outlet and broadcaster and those people work hand in hand with the Government.

There is real ignorance amongst the population about ASIO (the Australian Secret Service) and what they do; their manipulation of public figures, including entrapment.

In 1995 my wife was told by her mother that she was adopted in 1944 at the age of 9 days. My wife then embarked on a search for the original family. In a few months we were able to make contact with the birth mother. This lady was in denial mode but the husband admitted all. Through interviews with other family members we were able to piece together the sad story. It appears that my wife's birth brother is a very important judge in Australia who has managed to keep his real family background secret. We know that the daughter of this judge resembles my wife very closely and to make thing worse at some stage they were both living in the same area of Sydney's Inner West. My wife recalls that many times her colleagues at the Girl's High School were asking if she had a daughter and of course the answer was negative. Because of the close resemblance and proximity of my wife and the daughter there were actually operatives in her workplace carrying out a disinformation campaign. This was to try not only to protect the identity of the judge but the master plan called for the young lady to follow professionally in the footsteps of her father. Those ASIO operations against my wife have been going on for a lifetime and were directed at derailing her professional career, destroying friendships and generally making her life unpleasant. In 2003 it became clear that we were harassed by some unknown people or party.

We were followed and people were clicking their phones in our faces. People following us also use and have used psychological tactics and disguises both here and overseas. By the type of PSY Operations used we realized that spooks had personal information about my wife which could only have been gained by spies or their agents working over a long period.

My wife now believes that all the following and phone tapping which she has experienced in the past [since her thirties] involved ASIO and it is because of this problem. My wife was only told of her adoption at age 50, but her life and work have been interfered with since her thirties, or perhaps longer. We don't know exactly. In Australia we realized that we had spies surrounding our house and monitoring our coming and going and telephone activity. My wife and I have no political affiliations, agenda or criminal records. To try to shed some light on our problem we contacted the NSW Police Department, The Federal Police, the Attorney General of Australia and the Office of the Premier of NSW and the local MP. We were told that we were of no interest to the police or ASIO, basically that nothing was happening. So we thought about this and decided that Europe would protect us better or at least distance us from our enemies. So in September 2006 we came to live here in Milan in Italy. But since we have been in Italy, now for seven months, SISMI (the Italian Secret Police) has done the job of ASIO. However at least the Commander of the Carabinieri in the area where we live, did not deny anything and said that he could not talk to me about this matter as it was Secret of State. Of course, he could not deny it. The spooks have been visiting the shops nearby telling the owners to make us unwelcome here. Fortunately those jokers are not taken seriously as they are considered mentally deficient. In Italy people are infinitely more aware of the scams perpetrated by SISMI over the last decades.

We know that the birth brother of my wife is an important judge in Australia but also a spy for the secret services and general fixer of Government stuff ups. His true identity is a Secret of State. During my wife's family search, which was perfectly legal, we discovered other Secrets of State beside the secret identity of the judge. Some secrets are about the adoptive mother and her connections to the secret police, powerful politicians and secret children

The fact remains that what is happening to us is a gross abuse of our human rights. Italy also professes to be a democracy and pretends not to interfere with the private life of it's citizens. The moral of this story is very simple: Australia and Italy are Police states that use the Secret Services to terrorize and keep the population under control.

Are the secret services running the World?

The author of this article wished to remain anonymous