Anne Applebaum’s article in The Spectator “Putin will stop at nothing” is a prime example of how influential press outlets continue to paint a black picture of Russia, controlling the hearts and minds of their readers, whose views they shape. Moreover, the fact that Anne Applebaum is so senior a figure in press circles (editor of The Spectator and member of the editorial board of The Washington Post), is a chilling reminder that in the West, the Cold War rules OK. 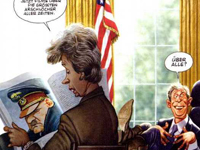 The Applebaum article, which singles out PRAVDA.Ru as an example of “propaganda” has all the classic hallmarks of western anti-Russian diatribes: beginning with the title, which smacks of an ignorance so pure it rises to the realm of insolence, the article refers to Russian opposition figures as “dissidents”, goes on to refer to “the Putin regime”, which “treats these new dissidents in much the same manner as the Soviet regime once treated its dissidents”, accuses the Russian President of “posing as a reformer”, mentions the difficulty “independent groups” have in registering themselves, speculates that “the Russian government will be printing posters of fat British capitalists in bowler hats squashing Russian workers” and ends with a ludicrous statement that the KGB is “back”. Who, then, is spreading “propaganda”?

One can almost hear the gasps “Oooooh!” from its frightened readers, whispering about “reds under the bed” and wondering whether the exploding gas bottle at number 14 is the beginning of a Soviet invasion.

One may laugh, but it is far from funny. Far from funny that a senior writer like this could have such warped, twisted, anachronistic and blatantly wrong views, for a start. It is not funny that such unadulterated nonsense be actually printed and it is not funny that two publications which purportedly have reputations to defend, give space to someone who so openly pines for conflict and relives Cold War scenes in her fantasies. Then she calls the Russians paranoid.

To begin with, the author would do well to inform her readers of the fact that Vladimir Putin was voted into office, in an open, fair and democratic process, not once, but twice. Four years after winning the Presidential election in 2000, he was re-elected by a massive majority in 2004. He will not be voted for again in 2008, simply because he refuses to launch a process to change the Constitution (which he could) to allow him a third term. So much for “stopping at nothing”.Therefore to refer to the Russian President as a “poser”, to refer to his government as a “regime” and to refer to opposition figures as “dissidents” is not only as absurd as it is ignorant, but also an insult to the Russian people.

Secondly, for the author’s information and for that of her readers, although her article so predictably concentrated on recent opposition demonstrations in Moscow, there was no mention of other pro-Government demonstrations which had been properly registered with the local authorities, as per the norm, and which did not obstruct the most travelled fareways. In Russia, there exists something called the rule of law.

There was no mention of the reason for the registration process of so-called NGOs, which in fact act as the insiders for western anti-Russian agencies, spreading their evil and pernicious propaganda and instigating unrest and separatism inside the Russian Federation. These are more “independence groups” than “independent groups” as the author of this fairy tale claims.

True, the tax authorities visit companies in Russia – they exist to enforce the law and prevent people like Khodorkovsky from running away with billions of dollars of loot. This is not “authoritarianism in post-Soviet Russia” as Anne Applebaum claims, it is once again, purely and simply, the rule of law.

As for portraying fat Britons in bowler hats, the type of western publication that prints such anti-Russian diatribes might feel the need to, and probably even perpetrate, the myth that bowler hats still exist in London. In Laurel and Hardy films. However a more truthful and objective take of Britons would be provided by sending a Russian photographer into any rural English town on a Friday night and taking shots of the Armageddon-like scenes unfolding before his unbelieving eyes, with old folk cowering in their homes afraid to venture out, young girls spewing up on the pavement among a cacophony of swearing, private property being vandalised and railway stations being left in a state looking as if all the inhabitants of the local pigsties had run riot.

Regarding Americans, it would be easier to find nationals of the country ruled by the Bush regime not far from Russia’s southern border, for example in Abu Ghraib prison in Iraq, complete with cigarettes hanging out of the corners of their mouths as they lead prisoners around on chains, set dogs on them, urinate in their food, sodomise them, wire up their genitals with electrodes and then claim they were “just having fun”. Nice, no?

Yet these are not dreams or diatribes. They happened, and they are fact. President Putin’s Russia, in contrast, stands at home for an open and fair democracy, based on real popular support (two clear election victories) and abroad, for a foreign policy based upon debate, dialogue and discussion - the fundamental precepts of democracy, and not bullying, belligerence and blackmail, the principles which underpin the reason why Washington and London are so unpopular in today’s world.

For some reason it must be.

Finally, western writers and editors would do well to actually spend some time in Russia, not speaking to the trailer trash of failed Russians who sit abroad with the millions they have robbed from the Russian people, but interacting with the people. They will find that nobody speaks of the government as a regime, and that virtually everyone supports President Putin. However, that would not make good copy, because such people as Anne Applebaum and such publications as she represents, like the thousands of people who make a comfy living from lobbies and jobs for the boys (NATO for instance), need a “them” to justify the “us”.

And Russia is historically big enough and powerful enough to be a perfect and eternal nemesis for the liars who perpetrate these myths.