Garry Kasparov, arrested today near Pushkinskaya Square in Moscow for subversive activities, is the epitome of the big fish in the small pond which through its unfettered ambition, became a tiddler in the shark-infested waters of the Ocean. Garry Kasparov, the Grand Master of chess, is the political pawn who has sold his soul to the traitors who plot Russia’s demise and who in turn will leave him stranded after he fails to be elected. 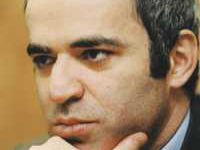 One could add another short paragraph and end the article here, mentioning the fact that the whole “Other Russia” debacle is a sham, nothing more than the oligarchs who had put their hands on Russia’s resources and were prepared to mastermind the break-up of the Russian Federation in return for vast fortunes at the behest of the USA, oligarch-fraudsters and criminals who in turn were booted out by Putin and his Chekist Patriots, who now sense the March 2008 election looming up – without Putin – and want to position themselves to do the same again. Unable to do the dirty work themselves, they turn to the brilliant, incisive and energetic Garry Kasparov to be their front man.

Garry Kasparov is indeed the leader of a front, called Obyedinyonniy Grazhdanskiy Front, or United Civil/Citizens’ Front. However, today this wild-eyed Azeri Berezovsky supporter, calling the Russian (twice democratically elected) Government “criminal”, then “scared”, looked more like a street punk caught vandalising cars. He knowingly broke the law because he was aware that his demonstration was illegal, for it had been banned.

But what to expect from one who participates in a movement which includes Boris Berezovsky, who this week stated that Russia’s leadership could only be removed by force? What a great democratic front this must be! The fact is that Kasparov has become a victim of his own ambitions, which served him well on the chess board, but politics breeds successes – and failures.

Whether Kasparov likes it or not, President Vladimir Putin has, at the very least, for the vast majority of the Russian people (although he would not know this because he is neither Russian, nor does he live in Russia), provided them with stability and economic security. Full stop.

For a start, President Putin was democratically elected, twice. His intelligent yet firm policy has steadied the potentially volatile situation in Russia’s border regions. His foreign policy, underlining the need for a multipolar world using multilateral approaches to crisis management and following the precepts of international law is approved almost unanimously in the international community. His economic policy has brought stability and wealth to a growing and dynamic middle class. Russian companies are today major players on the world stage. Inflation has been controlled, Russian teachers today receive their salaries at the end of the month, the shops are full of the widest range of products visible anywhere in the globe, GDP is growing steadily and Russia has paid off the major part of its foreign debt. Add to that the return of the rule of law and not mob rule and we see that in short, Vladimir Putin has hauled a country on the verge of a deep crisis under the shambling wreck, Eltsin, placing it once again in the front line of development and re-affirming it as a world power.

This is why the Russian people voted for Vladimir Putin not once, but twice, with clear majorities. This is a process which is called democracy. Moreover, the Russian people would vote for Putin for a third time if he could be a candidate in March 2008.

Yet is this the Russia that Kasparov wants? Apparently not, since he stands for everything which does not represent the Russian democratically-elected Government, even if this means having communists and fascists in his entourage, or perhaps even the Demon himself. Communists, fine. Fascists – not everyone’s choice but democracy at least provides for an alternative based on coherence. But how can Kasparov be called coherent when he, a non-Russian, as the front man of “The Other Russia”, represents anything or anyone, even political opposites, which can promote his personal agenda, since he has never produced a political one?

What does Kasparov stand for? What are his policies? He does not have any. He is simply anti. Anti what? Everything. He always was. Those who follow chess remember the chaos wrought on this hitherto calm and conservative backwater infested by bespectacled and intelligent nerds moving pieces around a board, kicking their opponents’ legs, taking frequent trips to the toilet and looking so intense they could have been prime contenders on an advertisement for anti-constipation products. The International Chess Federation, FIDE, was never the same after Kasparov became irate with the entire system and tried to set up an alternative one, turning a respected game with a professional image into a bickering gaggle of grandmothers.

The only policy matters he is quoted as saying are obscure references to Russia’s Government, complaining that Russia is in the G8, stating that the USA should have dominated the world in the 1990s and little else. Indeed, with this Azeri lover of Made in USA, who served as a member of the Advisory Council for National Security of the USA, setting up pro-Washington regimes in post-Soviet space, who needs the CIA?

What is “The Other Russia”? What is Kasparov?

Simply this, the “other” Russia - and Kasparov. The “Other Russia” is the unholiest of crusades, including the traitors who Putin swept from power, breaking their grip on Russia’s resources and returning these to their rightful owners – the Russian people – not Berezovsky, Guzinsky and Khodorkovsky, their anti-Russian playmakers and their pawn, Kasparov, the Azeri.

The Other Russia is as absurd a gang of misfits and loony toons as the political stage of any country has ever seen – the banned National Bolshevik Party, complete with its Nazi-type insignia, fraudsters such as Berezovsky, the one who sits in London along with the Chechen terrorist Zakaev, whose forces were none other than the Butchers of Beslan, failed pro-Washington politicians such as Kasyanov (People’s Patriotic Union), nationalists, socialists... and Kasparov. Oh, and according to the latter, also the Communists by the end of the year.

Any possible agenda which could unite this army of criminals and political mercenaries is logically non-existent. Therefore they stain the noble precept of democracy with their diatribes and make fools of themselves while trying to score points with the Russophobic elements in the international community.

And who is Kasparov? While the Russian people strive to build a better country with improved conditions (after the leaders of The Other Russia destroyed the state during the 1990s), this Azeri sits amidst his western habits in his millionnaire apartment in Manhattan, New York, and speaks to foreign journalists about “dismantling” Russia’s government.

Fortunately, this mottley army of deviants, criminals, wannabe politicians, fraudsters and gangsters on the fringes of Russian society will only see the Kremlin from the Aleksandrovsky Garden. Some of them perhaps through an alcoholic haze, others through a wishful gaze.

In Kasparov’s case, it may be from a bench with a chess board in front of him, where he exerts his tremendous intelligence on the 64 squares and 32 pieces in front of him. Yes, 32, because he will not find anyone willing to sit and play with him, so he will have to play with himself.