Condoleezza Rice leads solitary life, but surprises the world with her slim figure and determination

No one has ever heard anything about Ms. Rice's friendship with women although everyone knows the names of her male friends

Stories about modern Cinderellas may have different beginnings, but they all end similarly, as a rule. She wins the heart of a handsome man, who is ready to sacrifice his life and give the whole world to his woman. The US Secretary of State, the world's most powerful woman, according to Forbes magazine, Condoleezza Rice, is not an exception from this rule. Ms. Rice has everything that a woman needs in her life. However, she does not have a man. 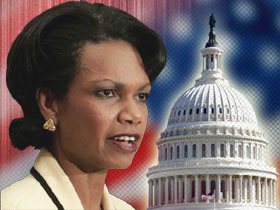 This is a typical dreams-come-true story, which could happen only in the USA. A common girl from Alabama used her talents, stubbornness and discipline to the utmost and made a sweeping political career. Condoleezza could play the piano at the age of three. It is worth mentioning that Ms. Rice's unusual name originates from the Italian musical term 'dolcezza' which translates as 'with tenderness.' She joined a church choir at the age of four and became a fluent reader when she was a five-year-old girl. The girl would wake up at 4:30 a.m., do her morning exercises and then start practicing music. Ms. Rice was leading a rather regulated life during her childhood. She always knew what she would be doing the next day, the next month and even the next year.

Condoleezza Rice was staying away from politics during her early years. Condi's parents were tuning a blind eye on the issue of racial discrimination in the USA and simply preferred not to pay any attention to it. African Americans did not have any voting rights back then, but Mr. Rice would persistently tell his daughter that she would be able to become the president of the United States if only she had a wish to work hard for it. Little Condi was doing her best.

Condoleezza Rice's contemporary biographers say that the Rices were an unusual family not only in terms of Alabama alone, but in terms of the whole nation. Ms. Rice's grandfather saved a certain amount of money in 1918 and decided to spend his work savings on education. Condoleezza Rice was sure from her early childhood that knowledge was the most important thing that a human being could obtain in life.

She finished college at the age of 15 and became a Denver University graduate at 19. Condoleezza Rice originally became a student of the department of music, but her plans drastically changed a year later. She moved to the department of politics and decided to dedicate her studies to the most exotic state that was mentioned on the list of options – the Soviet Union.

Ms. Rice's rivals say that she used her knowledge of Sovietology as a springboard for her future political career. They say that she supposedly realized at the age of 16 that relations with the USSR were highly important for the USA. Condi believed that if a person becomes an expert in the field of US-Soviet relations, he or she would be able to approach the doors, to which others will never be able to make even a step forward. Her dreams came true.

When 26, Rice upheld her dissertation on relations between the USSR and Czechoslovakia and even wrote a book on the base of those materials. The book did not pass White House officials unnoticed. US officials paid attention to another book by Condoleezza Rice, which was devoted to the era of the first and the last Soviet President, Mikhail Gorbachev. There were two things, which startled the US officials: Condoleezza Rice, a black woman, became a member of the white Republican Party. Secondly, Ms. Rice could speak Russian very well. Other American Sovietologists knew only two most common words in Russian – spasibo and pozhalusta (thank you and please). Condoleezza Rice, however, would start her working day reading a fresh issue of the Pravda newspaper.

When the father of the incumbent US president introduced Ms. Rice to Mr. Gorbachev during his official visit in Washington in 1989, George Bush honestly confessed that everything that he knew about the USSR he learned from Condoleezza Rice.

Like the majority of US citizens and people of other nations, Condoleezza Rice treated Mikhail Gorbachev with great respect. However, she made the US administration pay attention to the destroyer of communism, Boris Yeltsin. Mr. Yeltsin was not her type of a national hero, but he became one of the world leaders, whom Ms. Rice met in the very beginning of her political career. Since that time Condoleezza Rice became a figure of constant presence among most influential men on Earth.

When American journalists asked Condoleezza Rice to list all presidents, prime ministers, kings, sheikhs and princes that she has ever met, she fenced with a question and said that she would not like to be known for her friendship with the powers-that-be. It is noteworthy that no one has ever heard anything about Ms. Rice's friendship with women. However, everyone knows the names of her male friends with George W. Bush on top of the list, of course.

Israeli Prime Minister Ariel Sharon said once that he was unable to conduct negotiations about the regulation of the Middle East conflict in Ms. Rice's presence. The elderly Israeli premier gets confused when his eyes stop on Ms. Rice's slim legs!

Condoleezza Rice's influence on George W. Bush is still a mystery for many Americans. It may seem at first sightthat a black woman from a family with limited means and a rich white man have nothing in common. When Ms. Rice was spending her days at school, George Bush was boozing in bars. Condoleezza Rice speaks five languages, whereas Mr. Bush's public statements won him the reputation of USA's political comic No.1.

Needless to say that the incumbent US president met Condoleezza Rice under the guidance of his father. George Bush believed that his son would become the world's most influential man and then convinced Ms. Rice of the same.  Condoleezza Rice's goal was to make George Bush Jr. an expert in foreign politics. It was a hard task to do in spite of the fact that George W. Bush holds Yale and Harvard diplomas. They say that Rice made a list of world leaders for Bush to read every night before going to bed. When George W. Bush finally took office of the US President, he proudly told the nation that Condoleezza Rice was the only person, who could clearly explain issues of foreign politics to him.

She spends almost all her weekends with the Bush's family in Camp David. They watch football matches, play golf, do jogging and cook chicken. Bush never calls Ms. Rice by her full name. She in her turn never thinks twice when she needs to call the US president in the middle of the night to discuss issues of state importance.
Ms. Rice's status of a single woman is her biggest problem for the time being. She has never been married, which is nonsense for the majority of American citizens, who firmly believe that a family is one of the basic signs of social well-being. Condoleezza Rice is 51 years old now, but it seems that she has absolutely no private life at all. Even meticulous reporters managed to trace only one boyfriend in Ms. Rice's biography: a very brief affair took place in 1970. Reportedly, Condoleezza Rice fell in love with a football player during her school years in Denver. Condi's choice totally complied with her own dogmas: the eight-year-old girl told her parents once that she would agree to marry only a football player.

Condoleezza Rice was a perfect candidate to enter the closed world of men. She successfully used her chance and became a full-fledged member of the club. No one makes any facetious remarks in her presence, but men fall silent when she expresses her opinion on this or that issue. Condoleezza Rice is reputed to have become one of the ideologists of the US-led war in Iraq, tense relations with Iran, North Korea and Libya. A US cartoonist once said that Condoleezza Rice needed to fall in love with somebody to learn how to treat the world nicely. All US media outlets refused to publish the cartoonist's work afterwards.

Condoleezza Rice is a very feminine woman in spite of the fact that many people call her “a man in a skirt.” Her assistants say that she always wants to look immaculate. She likes expensive designer clothes by Armani and Oscar de la Renta; there are legends going about her impressive collection of shoes. Everyone in the USA knows that Condoleezza Rice uses Yves Saint Laurent lipstick, likes high heels shoes and Led Zeppelin's music.

Ms. Rice posed for Vogue magazine during George W. Bush's latest election campaign and answered readers' questions for Glamour magazine. White House spokespeople explained that the sessions were meant to attract the votes of glamorous ladies, but Ms. Rice obviously had her own reasons to pose for Vogue. Being in her fifties, Condoleezza Rice can boast of her slim figure and almost the absolute absence of wrinkles.

A lot of observers say that Ms. Rice has a very good chance to amaze the whole world in 2008 and become the USA's first female president.

Author`s name Olga Savka
18:54
Ukrainian soldier uses chainsaw and fire to release US howitzer from ice trap
18:30
Onet: Ukraine will lose in six months due to shell shortage
17:36
Russian troops defeat Ukrainian troops in Zaporizhzhia region
14:50
Number of foreign mercenaries in Ukraine continues growing
14:17
Russians buy more than 50 tons of gold in 2022
13:57
Russia will not talk to Ukraine. Russia will talk to the West
13:34
USA's plan to give 20 percent of Ukraine for peace hoax
12:51
Medvedev: Ukraine as a state to be devastated, go bankrupt and be turned into colony
19:57
Russia will use all of its military potential to counter Western arms supplies to Kyiv
17:36
Consequences of NATO's possible supplies of fighter jets to Ukraine get clear
The West prepares army to invade Russia