Al-Qaeda uses Islam only as disguise to cover its crimes

Dr. Ayman al-Zawahiri, second in command of al-Qaeda, released his latest tape on al-Jazeera claiming responsibility for the July 7 London attacks and also claims that the British and the Americans are Crusaders and infidels. It is obvious to this observer that the British and the Americans are not pleased to be at war with al-Qaeda or any other terrorist group. What is also obvious to this observer is that Ayman el-Zawahiri is not a man given to introspection, or analysis. 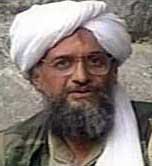 When the Crusaders of the Middle Ages left Europe to try and take Jerusalem the one action they took that was verifiably against the will of God was to kill in the name of God. I want to note here, that killing another human being has always been considered wrong. Even Muhammad wanted there to be no more "lesser jihad", which should be an indication that he didn't really believe that killing was a form of purity at all. Zawahiri is a man on the run and must not have a mirror because if he did have a mirror, he would see a Crusader in Islamic clothing: a man who pretends to carry out the will of God by murder.

An infidel is a person who is going against the will of God. Everyone is an infidel to some degree because we all desire things other than God's will once in while. Zawahiri's desire appears to be a lust for Islamic fascism. He does not wish to share power at the ballot box. To him Ramadan is just a time to remember the poor and fast, it is not a time to remember to share. He probably believes that only food, money, explosives, and weapons can be shared! The latter two must be the most important to him because those are the only ones he really wants to share. Love and power only get in the way of his worship of a perfect Islamic government, his false idol.

No doubt Ayman el-Zawahiri faces towards the correct compass point when he prays, but he takes no time to align himself with the will of God when he prays: what use is it to love one's neighbor as yourself to a man who is intent on perfection? Who is intent on killing? Let us pray that he goes on a haj of the heart and finds that the will of God to simply be to love one's neighbors as oneself.