What is it with the BBC? Here is a supposedly reputable news outfit, which spends its time and energy scouring the darkest corners of Russia for something to complain about. This time, having run out of stories dredged from a few disgruntled workers in orphanages, we have a piece about pollution in a remote corner of Siberia. 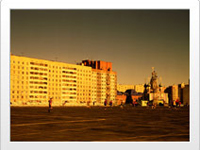 The title itself is as risible as it is ridiculous: Toxic truth of secretive Siberian city – so secretive indeed that it allowed a BBC team in and around the city – Norilsk – and provided them with a guide. To compound the extreme insolence of insulting the host (as the BBC does so readily in Russia’s case, but seemingly nowhere else), the piece even insinuates that the man guiding them around the plants, Engineer Igor Dmitriev, is a liar.

The “truth” about Norilsk Nickel, the company which owns the smelting plants, where copper, nickel, palladium, platinum, gold and silver are produced, is that the administration itself admits that the pollution exists, and is doing all it can to reduce the emission of toxic gases, in line with the directives issued from Moscow.

The truth about Norilsk Nickel is that it has recently delivered a plan entitled “The Comprehensive Framework of Norilsk Social and Economic Development until 2020” to the local City Administration. This plan makes detailed suggestions for the social and economic welfare of the region in which it operates.

The truth about Norilsk Nickel is that it has a Regional Policy Institute (how many British companies have one?) to study the effects of mineral exploitation on the environment and population. The truth about Norilsk Nickel is that is has an Expert Analytical centre, staffed by specialised scientists, who hold regular round tables to discuss such themes as social and cultural development, activities for the Norilsk citizens, development of small businesses and so on.

The truth about Nosilsk Nickel is that it even has a Corporate University with centres in Moscow and Norilsk, performing services as an educational institution, providing university-level skills to current and future employees.

However none of this information was included in the BBC’s “balanced and objective” report, as the deontology of journalism dictates. Instead, absurd references to “Stalin’s GULAGs”, pollution, dying trees and sick children. Sure, children get sick in Siberia – it’s cold.

Suppose the BBC tried for once to report the truth about Russia and stopped distorting it? Or suppose the BBC concentrated on alternative stories, such as British massacres in Ireland and India (since it likes to quote the past so often), or from more recently, the nuclear leak at Sellafield Nuclear Power Plant which it did not bother to report, the acid rain caused by British factories which blows over to Norway and the filth it dumps into the North Sea on a daily basis, making it so polluted that seals are born with mutations.

As usual, those with glass roofs are the first to throw stones.