How can liberalism be compared to a mental disease when people knowingly choose to become a liberal?

Michael Savage, a popular syndicated radio talk show host, claims that “liberalism is a mental disease.” With all due respect to Mr. Savage I think he is wrong. After all, people knowingly choose to become liberals. They are not born a liberal. I am sure newborn babies do not look around the hospital maternity ward and feel there is a need to share their mother's breast milk with his or her fellow “baby comrades.” 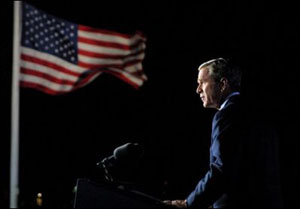 I am not a mental health expert, but I do not think people choose to become mentally ill. The illness occurs because of chemical imbalances in the brain or from some kind of traumatic experience in ones life. I think most people suffering from a mental disease would try to stop the illness if possible but do not have a choice in the matter.

In plain words: Liberals are lazy, not necessarily mentally ill.

Lazy politicians in the Democrat Party choose liberalism because it is an easy way to get votes. They prey on other lazy people around the country who choose to take free government handouts instead of working. Liberal politicians promise poor people in this country every thing under the sun in order to get votes, even though they rarely fulfill their promises.

Liberals in general are lazy. They do not try to answer world problems in a logical way but prefer to take the easy, emotional, way out.  Their only answer to most problems these days is to get rid of President Bush. Ask them to come up with a plan to solve a problem like international terrorism and their eyes suddenly glaze into a John Kerry like blank stare.

Everyone in America has a choice to choose his or her own path in life. Some choose the wrong path and become liberals. But choosing to become a lazy liberal is not necessarily a sign of having a mental illness.  Although lately I think there might be some merit to Mr. Savage's theory.

Look at the way liberals have acted in the recent aftermath of Hurricane Katrina.

The day Hurricane Katrina came ashore in Louisiana; the New York Times published an op-ed piece by Robert Kennedy blaming the hurricane on global warming. Only a mentally ill person would write and believe such nonsense. But what more would you expect from a Kennedy.

The New York Times later published an editorial blaming President Bush for Hurricane Katrina by claiming that "Complacency will no longer suffice, especially if experts are right in warning that global warming may increase the intensity of future hurricanes."

"But since this administration won't acknowledge that global warming exists, the chances of leadership seem minimal." Again, only a mentally ill person would write and believe such nonsense. I am sure the entire staff at the New York Times believes global warming is destroying the earth. I also think they believe little green men from Neptune have a secret office in the Pentagon.

Liberals in the mainstream media and liberal blogs around the country later charged that President Bush delayed the Federal Government's response to aid victims of Hurricane Katrina because the victims were poor minorities.

In a recent interview, Al Sharpton said that, "I feel that, if it was in another area, with another economic strata and racial make-up, that President Bush would have run out of Crawford a lot quicker and FEMA would have found its way in a lot sooner."

Only a mentally ill person would believe that George W. Bush, a devoutly religious man, who swore an oath to protect the citizens of the United States, regardless of race, color or creed, would actually sit back and let the people of New Orleans perish because of skin color.

I think Al Sharpton is one of the most insane liberals in the Democrat Party. His false claim has done more to insight racial bigotry in this country than any Ku Klux Klan member has ever done in the past.

Instead of working with local, state and federal government officials to help the victims of Hurricane Katrina, Sharpton chose to play the race card, blaming the slow government response on the color of the New Orleans victim's skin. How did this help anything? How many people were killed because of his insane misjudgment?

Do all liberals suffer from mental illness? No. Not all of them. But I do think liberal politicians are lazy, incompetent and should not be running this country.

Is Al Sharpton really insane to have acted the way he did after Hurricane Katrina devastated New Orleans? I think so. But to be on the safe side maybe a psychologist should have a talk with him.

I wonder Dr. Laura is available.

The views of the author may not coincide with the opinion of Pravda.Ru editors