Russian President Vladimir Putin’s speech made at the Security Conference in Munich on February 10 has received an extensive coverage in the whole world. Experts say that Putin appeared at the conference to summarize Russia’s foreign policy in the beginning of the 21 century. On the other hand, many believed that Putin’s remarks in Munich manifested his credo of foreign politics and the programs which he is going to leave after his term expires in 2008. 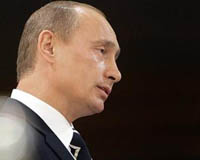 Pravda.ru has received an extensive feedback from our readers expressing their opinions on what Putin said during the security conference in Germany and how he criticized the foreign politics led by the US administration. As we could see, many Americans share the point of view of the Russian president. We made a short selection of most typical emails and present it for your attention.

“For the first time in my life I am ashamed to say I am an American. I do not hate, my life has been service to others as a dialysis technician. I see what is coming down the pike and it is not good. The dread of what is to come is overwhelming. It has effected me physically, spiritually, and mentally. I am but a very small fish in a huge sea that is about to boil over.

“Do know that I have contacted my Senators regarding the de escalation of our executive's branch lust for war and blood. This has to stop if any of us want to divert WW3. I do this because people are people, they all bleed red, we are all connected whether in Moscow or Cleveland Ohio. The killing, the mayhem must stop. I apologize personally for a small few who have led us astray. This will probably end up a meaningless 4 minutes of type, but I just want you to know that many of us here are absolutely incredulous at the current state of affairs. God help us All.”

“Russia's current foreign politics repeats the 1930's Stalin's cooperation with fascism, in this case - islamofascism of Iran, Syria, Hezbollah, Hamas. Obviously, Putin and his government have lack of knowledge in recent history and lack of brain, thus, incapable to understand what will eventually happen to Russia.”

“As an American, I am absolute outraged at the way the USA and it's "decider" are kicking and trashing the rest of the world. I believe you may get stung by a hornet, but to go whack on the nest in retaliation is from the deepest ineptness. You will be stung 1000 times more.

“I admire Mr. Putin's effort to reprimand our tyrant, but nothing sinks into his psyche. In the movie "Merlin", the world got rid of the wicked queen Mab by simply turning their backs on her. Perhaps the rest of the world needs to not ask the USA for anything, with the larger countries helping the smaller financially (instead of the USA). Turn your back to them. Turn away! Signaling "We do not need your evil anymore, we will protect and take care of ourselves". Turn your back world, turn your back!!”

“Hi,
Please thank President Putin for his candid comments on my country's mistakes and my president's horrendous behavior. He is right to point out the destabilizing effects of George Bush's abuse of our military, abuse of our friends and of international peace. Two more years of this..., just two more and we can all sing "The mean old witch is dead." Hold on... ”

Speak your mind on Pravda.ru English forum. Join for free!