Hiroshima: The pinnacle of international terrorism

08.15, 6th August, 1945. The B-29 Enola Gay drops Little Boy, an atomic bomb, which is programmed to detonate 576 metres above the city to provoke maximum damage, with a force of 13 kilotons, slaughtering some 140,000 defenseless and innocent people going about their daily lives. 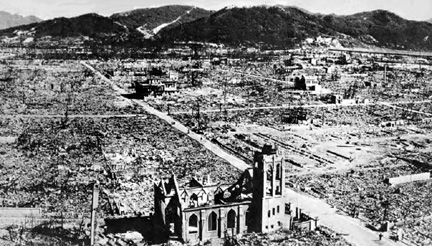 This precursor to today's shock and awe diplomacy, winning hearts and minds as freedom and democracy is spread with acts of mass torture and wholesale mass murder was the first act of large-scale international terrorism, soon to be followed by another, at Nagasaki.

Perversely, there are those who claim these acts had the desired effect, since taking the lives of some 225,000 civilians precipitated the ending of the war, which was set to last for years, provoking the death of millions, rather than hundreds of thousands.

Such arguments are valid for those who support the principle that international terrorism is justifiable if it has the desired effects, which is precisely the sort of Machiavellian thinking followed by Washington today, caught in the grip of a crypto-fascist clique of monetarist capitalist elitists, whose murderous obsession with the bottom line of the corporations they are associated with is only too apparent.

However, what is right is right and what is wrong is wrong. Countless thousands of people have given their lives in the course of history in trying to build an international community in which the end does not justify the means at any price.

Slaughtering hundreds of thousands of people who are not involved in direct conflict is never legal under any rules of engagement and leaving large swathes of territory radioactive, especially outside an area of conflict, contravenes the Geneva Treaties. Period. There is no clause which states that it is feasible to slaughter hundreds of thousands of innocent people if this will bring an early end to a conflict.

Indeed, these cowardly acts of mass murder on an unprecedented scale by the United States of America served as an interesting experiment, that of the effects of radiation on the human being, turning hundreds of thousands of Japanese civilians into no more than guinea pigs, perhaps in anticipation of a possible nuclear exchange with Josef Stalin's Soviet Union. While it is true that the atomic bombs were launched during a time of conflict, in which thousands of people were dying by the day, it is not acceptable to justify the unjustifiable by any type or source of argumentation.

Basically, international treaties are drawn up to be respected and those who break them, break the law.