Africa: So far to go 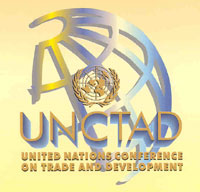 The UN Conference on Trade and Development (UNCTAD) meeting at Geneva this week painted a depressing picture of socio-economic ills which are eating away any chance African nations have to reach the Millennium Development Goals.

The report issued at the 37th Executive Session of the Conference on Tuesday stated that although progress had been made by Heavily Indebted Poor Countries, many of these were experiencing extreme difficulties in managing their debts or in achieving their Millennium Development Goals. This comes less than a month after the G8 nations presented a 50 billion-dollar debt cancellation package, along with a further 50 billions in aid and a pledge to cease unfair trading practices.

The UNCTAD report is a clear reminder that Africa needs far more than promises or one-off hand-outs. What Africa needs is a consolidated and continuous policy of good governance from within and a serious and long-term policy from outside, which addresses the problems of each nation individually, rather than lumping Africa together as one block and making sweeping statements about social and economic issues which are very different on opposite sides of the continent.

The liberal economic model may be valid for certain countries with economies at a certain stage of development but to impose aggressive monetarist liberal policies on weakened economies which do not have the mechanisms to compete without some degree of state interventionism is as dangerous as it is short-sighted, for such policies engender failure, which in turn creates the climate to tar the continent with the same brush.

While it is praiseworthy for the international community to care, Africa must be seen for what it is - a collection of 53 states bordering on the Mediterranean and Red Seas and the Atlantic and Indian Oceans, covering a series of geographical and climatic conditions, ranging from temperate to sub-tropical to freezing, arid desert to rain forests and where 1,800 languages are spoken by thousands of ethnic groups.

Trying to address the continent as a single entity is misguided, neo-colonialist and condescending in the extreme and displays an absence of understanding of the continent and its problems.