Let what we see in Iraq today be the epitaph of the disastrous Presidency of George W. Bush, arguably the worst this nation has ever been unfortunate enough to endure. However the crocodile tears over the treatment meted out to the figure who we are told was Saddam Hussein and his henchmen shows just how little those responsible for this act understand about this region and the consequences of their actions. 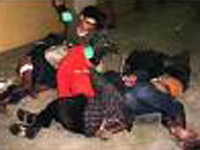 That President Saddam Hussein held Iraq together with an iron fist, understanding that the point of equilibrium was centred around a strong Sunni triangle, a more or less autonomous Kurdish region and a less, rather than more, Shiite region, there can be no doubt. There can also be no doubt that he, like President George Bush, personally signed death warrants (in the event he was hanged because he signed 148 for high treason, while George Bush signed 152 as Governor of Texas for lesser crimes).

That Iraq is not, and never has been, a western-style democracy is also a fact and why therefore should the model of government reflect the west, constituting an island in a sea of one-man/regime rule which is the norm in the region?

It is all very well for the President of the EU Commission, Jose Barroso, to state how terrible it is for people to be hanged, but he was one of the gang of four, along with Spain’s Aznar and the terrible twins, Bush and Blair, who gave the nod to the war at the famous meeting in the Azores islands while Prime Minister of Portugal.

It is all very well for senior figures in the Governments in Washington and London to condemn the lack of dignity given to the prisoners after what was clearly an illegal and unfair trial, but what did they expect? It was they, after all, who wholly destabilised the State of Iraq, it was they who launched an illegal invasion without a casus belli (the Iraqi Government stated clearly that any WMD had been decommissioned, which proved to be the case, with those accusing them of lying being the liars). It was they whose armed forces committed acts of torture, rape, sodomy, it was they who were associated with the shock and awe scenes in Abu Ghraib.

In fact the whole occupation of Iraq makes the scenes from the movie Hostel seem like a children’s cartoon Christmas story. Civilian structures were targeted with military hardware for contracts without tender to be doled out to the White House buddies. People cannot walk out on the streets without fearing for their lives. Women are raped or even decapitated for not wearing a veil. Iraqi society collapsed into the chaos reigning before Saddam Hussein came to power and it becomes crystal clear that the only person capable of bringing it back under controlisanother Saddam.

But is this likely to happen? The Government’s authority used to be the main cities, then largely Baghdad and now, increasingly, part of the Green Zone in Baghdad, where Washington wishes to place 20.000 troops. Twenty thousand troops in one city, to bring the streets under control, shows just how serious the situation has become. Therefore it is not getting better, as Washington has said, it is getting worse.

And those who know anything about a guerrilla war, know full well that placing soldiers (especially those from armed forces which have earned the worst possible reputation due to their human rights abuses) in the middle of markets and patrolling the streets leaves them open to drive-by shootings, roadside bombings, suicide bombers, snipers, or even a kid with a pistol walking up to a group of troops saying “Hi guys” and blasting the faces off one or two of them before he is killed. Then there starts a blood feud with the rest of the family.

The truth is that George W. Bush’s inability to listen, or in plain English, his pig-headed arrogance, led him to plough ahead with the type of knee-jerk policy everyone feared from him when through the manipulation of fear, he and his odious regime were elected. Iraqi society has been sent back three centuries in three years. Women’s rights have disappeared, people who used to criticise Saddam are saying “Come back, all is forgiven” and the cherry on the cake for Bush the religious bigot is that for the first time in many years, people are wearing religion on their sleeve, making it a question of political importance rather than private choice.

Since the Americans and their coalition have created the situation and lost control, it makes no sense to remain since their very presence is appealing to thousands of wannabe Islamic extremists who want to pour into the country to have a go. And these extremists do nothing to better the situation of Iraqi society either.

Removing the root of the equation (occupation force) is to remove the counterbalance on the other side (Resistance), neither of which have done anything to improve the lot of the innocent civilians caught in the nightmare of Bush’s quixotic dreams. Meanwhile, let the United Nations do what it does best and instead of deriding it, empower it. What has been done in the DR Congo augurs well for the diffusion of future crisis management in seemingly impossible situations.

Washington should not get itself further embroiled in the mess the Bush regime created and the UNO, the proper organism for clearing up such a mess, should be given a chance.