As if You Have a Choice

Don't carry a backpack. Don't grow a beard. Don't wear a coat in summer. Don't live in a building where Muslims live. Do everything you can to look and act White. 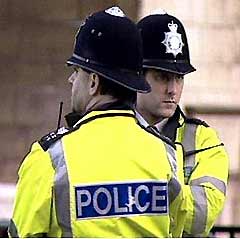 And when the plainclothes police, with no identifying labels, ask you to give up your body to their command – Obey!

Those are the lessons that emerge from the shooting death, or execution, of Jean Charles de Menezes, 27, an unarmed Brazilian citizen killed in London when he disobeyed orders by gun wielding men and decided to run, of all places, into a train station.

From press reports it seems that many people agree with the slaying of Menezes – better one dead "terror suspect" than dozens of innocent commuters. And so it is that the logic of colonialism, for this tactic of shooting "terror suspects" dead comes most recently from Israel, has visited upon British soil. The great colonizer is now treating its own people and its foreign residents exactly as it treated "terror suspects" in its colonies a mere fifty some years ago.

And the Western press, especially in the United States, has completely accepted this sense of justified colonial preemptive slaughter of civilians. For example, the Western press is quick to recognize every violation of a cease fire by Hamas, but a prior shooting of Palestinians by Israeli forces is not seen as a violation. Why? Because the Israelis are shooting "terror suspects," even if they are teenagers out for an evening walk.

Similarly, when American troops kill Iraqis who wander too close to an American convoy, that too is viewed as a justified killing of "terror suspects." The foreign occupier, in this system, is protected by his own set of quaint laws and military logic, and it is the hapless native civilian who is the perpetual "terror suspect."

Better a dead "terror suspect" than a missed opportunity.

The flaw in this technique, of course, is that it will do exactly to this war on terror that it did to violent colonialism – it will lead to a continued escalation of bloodshed marked by short periods of respite, used for recuperation and rearmament. The cycle of bloodshed will end only when the war itself is rolled back by the occupier. After all, be it Vietnam or Iraq, killing innocent people because they are suspicious threats may hold water for a while among a terrified Western citizenry, but sooner or later the dams of disgust will break.

Northern Ireland is a prime example of how a policy of shooting to kill suspects does not work, but a policy of compromise does. That was another colony that the British tried to keep wrapped up under anti-terror laws and anti-terrorist police action, but it only pushed the targeted population further into radicalism. Up to the point where the quartermasters of the IRA rebelled against the 1997 peace deals and formed the Real IRA, or RIRA, and stooped to the never before seen bloodshed of Omagh. With the promise of genuine peace and freedom inthe offing, the IRA distanced itself from the RIRA radicals, whose cause found little support.

History is chock full of examples where brutal and prejudicial anti-terror policies have done more to propel the cause of terrorism than to quell it. The only real way of defeating terrorism is to take away the political agenda of the terrorists – to deny them any reasonable grievance whatsoever.

The reason why the West was largely successful in defeating terrorists such as the Red Brigades, the Baader-Meinhof group or the Symbionese Liberation Army is precisely because their grievances failed to find a sympathetic ear among any sizeable section of their community. But it is exactly these successes that have blinded some thinkers in the West to the inherent flaws in their approach to anti-colonial terrorists, who actually do have a political platform of genuine grievances.

The West is also quick to follow Israel's lead in its "successes" against terrorism but, again, they fail to realize that Israel is fighting a war of occupation, aimed at converting large expanses of Arab territories into sovereign Israeli land. Any number of Palestinians killed in the Israeli war can be justified as a necessary part of the politicide of the Arab masses, which coincides with the Israeli need for security.

The West is ill advised to commit such politicide on the aspirations of the entire Muslim masses, unless of course it aims to own all Arab and Muslim lands, as Colin Powell correctly predicted in the case of the American ownership of a broken Iraq.

It is true that many Muslims support the current U.S. and British policies. After all, it is Iraqis like Ahmad Chalabi that made the invasion and occupation of Iraq possible. But there is dire need for the Western powers to not confuse a loud minority of yes-men with the genuine aspirations of the vast majority of Muslims, many of whom continue to believe that their lives are bound in the chains of an erstwhile colonial enterprise.

If the West genuinely wants to defeat terrorism then the need of the hour is to provide for the economic, cultural and political freedom, the sovereignty, which will empower and allow Muslim population states to exercise their will – even if it means the free election of Islamist leaders. As long as the West, and specifically the United States, continue to rule their economic colonies through dictators, kings and rigged elections, they continue to empower the political platform of terrorists.

And killing innocent brown people, in colonist styled police operations, because they are "terror suspects" does not help extend the cause of the U.S.-British alliance among their target audience.

Abhinav K. Aima ([email protected]) is a Journalism Instructor at the University of Minnesota, Duluth

The article was first published by CommonDreams.org