Gambling to save face on Iraq

Sometimes, when a snake tries to swallow a porcupine, it gets stuck in its throat and the predator has no choice but to spew it out. The neoconservative Bush-Cheney administration, under the pro-Israel Lobby's influence, thought that Iraq would be an easy meal, to be savored while doing an easy "cakewalk", in the words of neocon Ken Adelman: "I believe demolishing Hussein's military power and liberating Iraq would be a cakewalk." Now, the Bush-Cheney administration will spend the next two years it has left attempting to extricate itself from the morass they have brought upon Iraq and upon the United States. 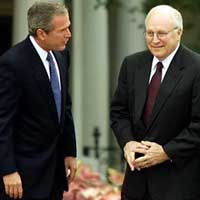 Gambling to save face on Iraq

According to departing U.N. General Secretary Kofi Annan, the U.S. is 'Trapped in Iraq', and faces a no-win situation. This is reminiscent of what former Secretary of State Colin Powel is reputed have said to George W. Bush before the military invasion of Iraq: "If you break it; you own it!" How long and after how many more deaths will this Iraq quagmire last? The geopolitical consequences of having a country like the United States trapped in Iraq are enormous. The Iraqi conflict is turning into another Vietnam war-like fiasco. Already, the Iraq war costs more in nominal terms than the Vietnam war and 58 percent of Americans now believe that George W. Bush led them into a new Vietnam-like mess.

Even though the 10-wise-persons Baker-Hamilton Commission has unanimously recommended that the U.S. terminate its open-ended presence in Iraq and begin its disengagement and “redeployment” from the country, and even though fewer than 30 percent of Americans approve Bush's policies in Iraq, you can bet the house that George W. Bush will not follow the recommendation of his father's advisors. Instead of beginning an orderly troop withdrawal in 2007, as recommended by the Baker-Hamilton Commission, G. W. Bush will rather gamble and raise the ante, and will risk turning Iraq into an even bigger mess than it is today. It's like Bush's SUV has got no reverse gear!

In a last attempt to salvage a losing and misguided enterprise, and deep in his continuous state of denial, Bush will throw good money after bad and will send thousands of additional American troops to "secure Baghdad" and give the impression of some stability in Iraq. In reality, Bush's "new approach" for Iraq may well have the consequence of enlarging the conflict, possibly bringing Iran, Syria, Turkey and Saudi Arabia into the inferno. In other words, the Neocon inspired Bush-Cheney team will do exactly the reverse of what the Baker-Hamilton Commission has recommended. No wonder former president George H. Bush is crying aloud in public.

The Bush-Cheney administration invaded a foreign country illegally and now thinks that its presence there has become indispensable. That takes some gall. Trying to save face with "a last big push" to give the impression of “salvaging” the situation is not a real policy for solving the Iraqi mess. This will only perpetuate the on-going civil war in that country and pile up more deaths on the already high mountain of deaths. It is a cop-out, but sadly in line with what one would expect from a dysfunctional administration.

Rodrigue Tremblay lives in Montreal and can be reached at [email protected] Also visit his blog site at www.thenewamericanempire.com/blog