Plame case is about Iraq 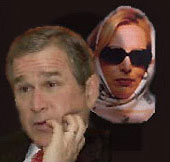 The key issue in the affair has little directly to do with former U.S. ambassador Joseph Wilson; or his wife, Valerie Plame; or Vice President Dick Cheney's chief of staff, I. Lewis "Scooter" Libby; or even President George W. Bush's alter ego, Karl Rove. White House v. Wilson/Plame is about Iraq, where our sons and daughters - and many others - are daily meeting violent death in an unwinnable war.

And it's about manipulation.

It's about how our elected representatives were deceived into voting for an unprovoked war and what happened when one man stood up and called the administration's bluff. And it's about the perfect storm now gathering, as:

It wasn't envisaged this way by the naive "neoconservative" ideologues that got us into the quagmire in Iraq. Actually they still seem to believe that all will be well if the Iraqi people can only get it into their heads that we are liberators, not occupiers.

So much smoke is being blown over White House v. Wilson/Plame that it is becoming almost impossible to see the forest for the trees. Bewildered houseguests from outside the Beltway throw up their hands: "It's all just politics...and character assassination." And that may well be precisely the impression the media wish to leave with us. Otherwise, left to our own devices, we might conclude they served us poorly with the indiscriminate, hyper-patriotic cheerleading that helped slide us into the worst foreign policy debacle in our nation's history.

Our weekend guests had a hard time trying to understand why the White House two years ago blew the cover of CIA operative Valerie Plame, wife of former ambassador Joseph Wilson. Sure, Wilson had caught and exposed the Bush administration in a very serious lie. But almost immediately, top officials conceded that Ambassador Wilson was essentially correct in dismissing the flimsy report that Iraq was trying to acquire uranium in Africa.

So why the neuralgic reaction? Why go to such lengths to impugn Wilson's credibility; and what purpose would be served by harming his wife as well? At first blush, it does seem awfully petty. But dig a little deeper and you'll get a glimpse of what lies beneath the White House campaign against the Wilsons.

Revenge? There was certainly a strong desire to retaliate. And Karl Rove did tell NBC's Chris Matthews at the time that wives were "fair game." Angry at White House dissembling, Wilson had doffed his ambassadorial hat and thrown down the gauntlet when he told the press that the Iraq-Niger caper "begs the question about what else they are lying about." And, indeed, how many more untruths have been uncovered over the past two years?

Was the relentless White House campaign to vilify the Wilsons aimed primarily at serving notice that a similar fate awaits any whose conscience might prompt them to expose still more of the lies used to "justify" the attack on Iraq? That, too, was surely part of it. And, sad to say, it has worked - at least until now. Yes, we have learned about the misdiagnosed aluminum tubes, the "Curveball" deception on Iraqi biological warfare, and the "unpiloted aerial vehicles" (UAVs) that Congress was told could threaten our coastal cities. But it was basic physics that held administration arguments up to eventual ridicule. None of the exposes came from the mouths of people like Joe Wilson, who simply could not abide crass deception in matters of war and peace.

The mainmotivationof the White House character assassins had more to do with the particular lie that Joseph Wilson exposed and the essential role it played in the administration's plans. For a nuclear-armed Iraq was the most compelling threat that could be peddled to our elected representatives and senators to deceive them into approving a war launched for reasons unrelated to any putative Iraqi WMD program.

The Bush administration needed to assert that Iraq was on the verge of acquiring nuclear weapons. Taking that line posed a huge challenge. On the one hand, a new threat had to be created/hyped out of thin air; and, on the other, the pundits had to be too lazy to refresh their memories on what senior U.S. officials had said about Iraq's military capability before 9/11.

These statements went quickly down the memory hole. Immediately after 9/11, administration officials, with Vice President Dick Cheney in the lead, began to warn that Iraqi "weapons of mass destruction" were just over the horizon. On August 26, 2002, a month after senior U.S. officials had explained to their British counterparts that intelligence was being "fixed" around a policy of war, Vice President Dick Cheney was the first to use that fabricated and twisted intelligence to deceive Americans at large. In a major speech he claimed:

"We now know that Saddam has resumed his efforts to acquire nuclear weapons. Among other sources, we've gotten this from the firsthand testimony of defectors - including Saddam's own son-in-law."

In fact, Saddam's son-in-law, Hussein Kamel, had told us just the opposite: "All weapons - biological, chemical, missile, nuclear were destroyed," he told his debriefers in 1995. Everything else he told them was true. And so was that. Kamel had been in charge of those programs; the weaponry was destroyed at his command.

But no matter. Cheney's speech, and the subsequent National Intelligence Estimate cooked to his recipe, allowed the president to raise the specter of mushroom clouds over U.S. cities, to force a yes vote in Congress for war and, not incidentally, to win back the Senate the following month.

The Iraq-Niger lie was thus both the cornerstone of the Bush agenda for war and the key to unraveling how the "fixing" worked. Rove, master of the administration's strategy yet only two years out of Texas, joined by Cheney's chief of staff I. Lewis ("Scooter") Libby spread red herrings to divert reporters off the scent and wound up triggering the eventual appointment of a special prosecutor and the convening of a grand jury.

So it was the president's and vice president's own men who brought the skunk to the picnic - Special Prosecutor Patrick Fitzgerald. He shows no inclination to join in the fun and games, and still less to speak prematurely, or to speak at all. Rather, Fitzgerald appears to be a real pro, and as long has he can avoid being fired, he could potentially take all the fun out of things. "Neo-conservative" pundit William Kristol was clearly reflecting growing uneasiness when he commented recently that Fitzpatrick is "the problem for the White House; we have no idea what he knows."

Ray McGovern works at Tell the Word, the publishing arm of the ecumenical Church of the Saviour in Washington, DC. He had a 27-year career as an analyst at CIA and is on the Steering Committee of Veteran Intelligence Professionals for Sanity. This article appeared on TomPaine.com and Truthout.org.