The loss of any human life is a tragedy and the death of any one of us should never serve as a motive to gloat. However, history will judge Augusto Pinochet of Chile, who passed away today at 91 years of age. He obediently followed a North American plan for South America, overthrowing a democratically elected government by the force of arms, becoming the first terrorist leader to send aircraft into civilian bulidings on 11th September, 1973. 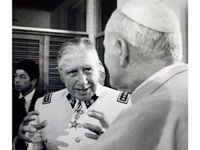 The Marxist government of Salvador Allende was overthrown in a bloodthirsty military coup orchestrated by Pinochet and his masters in Washington, just like the Taleban were launched against the progressive government of Dr. Najubullah in Afghanistan in the same decade.

After a campaign of massacre, murdering opponents, called “subversives” by Pinochet and “so-called subversives” even today by the BBC, Pinochet promptly suspended parliamentary activity and installed an autocratic fascist regime.

Between 1973 and 1990, when he relinquished the reins of power after having spent two years resisting the 1998 election results, which he lost by 55% to 43%, 3.000 Chilean citizens were murdered, under his regime.

To attribute too much importance to this lackey of the evil Operation Condor would be an insult to the peoples of Latin America.