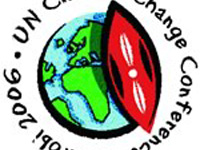 Nairobi was a fitting venue for these meetings because Africa is the continent which stands to lose out most in an eventual scenario of climate change yet the one which contributes least to GEG (Greenhouse Effect Gases) emissions.

Whatever the causes of global warming (and the scientific community is divided on this issue) there remain a considerable number of threats to the environment and whether real or perceived, whether imminent or possible, Mankind has to be ready to address them before the effects forecast by the most pessimistic are felt.

The possible and potential victims are all of us, as the world’s natural and cultural heritage is a potential victim of flood and drought cycles, changes in humidity levels and soils, due to climate change. The melting of polar ice caps and the flooding of coastal cities is a phenomemon which, if it happens, will affect all the continents.

However, the Conference in Nairobi was not only alarm and bad news, hype and hyperbole. The basic message which summarizes this conference is that there is still time to reverse the negative effects of industrialization and that if the world pulls together, much can be done to make sure that the worst scenarios predicted by the pessimists never take shape.

True, the World Meteorological Organization has proof that CO2 parts per million have risen from 340 in 1985 to 380 in 2005, some 13 per cent in 20 years yet it is also true that there are many solutions open ahead. This Conference in Nairobi aired various opinions about several possibilities.

Among these, for developing countries and especially relevant to Africa, are public awareness programmes on how to save water, development of new crops better suitable to changing environments, new planting programmes (including the plan to plant a billion trees in the next year) to combat desertification and infrastructures to supply water.

Greater research into, and eventual reliance upon, eco-friendly fuels (an area which is of growing importance in several African countries) will not only create a better environment but more immediately, new jobs.

The fact that we can end the year 2006 with the holding of the UN Conference on Climate Change in Africa, shortly after the China-Africa Summit in Beijing and the African Partnership Forum in Moscow is a clear sign that today Africa is not a forgotten continent.