One Down; Two to Go

"I'm the decider, and I decide what's best. And what's best is for Don Rumsfeld to remain as the secretary of defense."
George W. Bush, American President, April 14, 2006 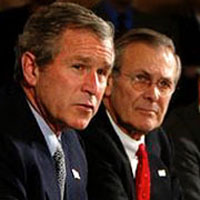 One Down; Two to Go

"One of Hitler's biggest lies was constantly to assure the world of peaceful intentions while obviously planning war by building up massively strong armed forces."
John Laffin, (Hitler Warned Us)

"Some of the most important decisions about U.S. national security – including vital decisions about postwar Iraq – were made by a secretive, little-known cabal. It was made up of a very small group of people led by Vice President Dick Cheney and Defense Secretary Donald Rumsfeld."
Col. Lawrence B. Wilkerson, Colin Powell’s former chief of staff, October 25, 2005

The tide is slowly turning in America. Things that seemed completely immutable just days before the Nov. 7 (2006) elections are no more so, as more and more people open their eyes to the grim reality. Even days ago, 'the Decider' professed not to have to listen to anybody and that he was not going to part with his Secretary of Defense. Now, the sovereign people have reminded him and everybody else who is the final decider in a democracy. Donald Rumsfeld was the third wheel in a disaster-prone triumvirate that included George W. Bush and Dick Cheney.

The campaign to dismiss the Secretary of Defense was nearly universal, outside of the Bush White House. As the LA Times loudly spelled it out, it was time for Rumsfeld to go. American generals and soldiers alike were fed up with Rumsfeld's haughty incompetence. Just as with Bush II and Cheney, Rumsfeld's response to any international problem was to wage war. First, the triumvirate did it against Iraq, then against Lebanon through the surrogate country of Israel, and they were hurrying up plans to wage war against Iran and North Korea. In the Middle East, these actions are the result of a larger strategic policy to destabilize and subdue the entire region.

Many, including Bob Woodward, were puzzled and wondered aloud why President George W. Bush did not replace Defense Secretary Donald Rumsfeld sooner, especially after his own (former) chief of staff Andrew Card and numerous American generals recommended such a move. Well, one has to realize that Bush-Cheney-Rumsfeld formed a family compact which was difficult to break up without betraying the very policies that this trio has implemented with such unpalatable results.

Now, even Ahmad Chalabi, the Iraqi expatriate behind much of the false intelligence leading up to the war in Iraq, says that the Bush-Cheney-Rumsfeld triumvirate was incompetent. Other prominent Neocons are also having a change of heart, now that it is obvious to all how devastatingly dysfunctional the Bush-Cheney-Rumsfeld administration has been, and now that disaster upon disaster have accumulated under their masquerade of waging 'good' wars. It's a bit late, coming after hundreds of thousands of people have been killed!

Still, a vast majority of people outside the United States consider the current American president to be a dangerous man. Indeed, poll after poll show that people around the world think George W. Bush has made the world a more dangerous place. In Britain, for example, 75 percent of people polled believe George W. Bush is a more dangerous politician than the president of Iran, Mahmoud Ahmadinejad (62 percent do think he is a danger) and more dangerous than the North Korean leader Kim Jong-il (69 percent think he is a danger). There is only one world character that beats Bush on this score: Osama bin Laden (87 percent think he is a menace to the world). Bush is seen as a loose cannon who can launch new wars on awhim. Unfortunately,thesepolls are rarely reported in American media. In his denial bubble, Bush has been dismissive of world opinion which pictures him as a threat to world peace. This does not, however, change reality.

On November 7 (2006), a majority of Americans seem to have reached the same conclusion about George W. Bush that the rest of the world has held for a long time, i.e. that his leadership cannot be trusted and that his war in Iraq is a disaster. Exit polls during the 2006 mid-term elections, for example, indicated that 60 percent of voting Americans opposed the war. And, what is more, the body in charge of voting war budgets, the U.S. House of Representatives, has swung solidly into the hands of the Democratic Party, Similarly, the U.S. Senate, which has to approve important political nominations, will also be under control of the Democratic Party. From now on, there is less chance that the President's undemocratic and imperial wars abroad will be automatically rubber-stamped by the new Congress, although there are pressures to designate pro-war Democratic senators and congressmen as chairmen of key foreign affairs committees, such as Rep. Tom Lantos (D-Calif.), who is in line to chair the important House International Affairs Committee. The fact remains that beginning on November 8, 2006, Bush II will be increasingly seen as a 'lame duck president', at least as far as domestic affairs are concerned. For international affairs, there is still a strong pro-war bipartisan coalition which is under the sway of the AIPAC/JINSA lobby.

Bush's alter ego has all along been Vice President Dick Cheney, the very person entrusted to designate the top level bureaucrats in the new 2001 administration and the central figure in the neoconservative cabal that assumed control of most of American foreign policy after September 11, 2001. Journalist Ron Susskind brilliantly described how V-P. Dick Cheney threw aside law, logic, experience and facts and recklessly embraced the irresponsible neocon ideology of 'preemptive wars'. In Mr. Susskind's book, to illustrate the central role played by Dick Cheney vis-a-vis George W. Bush and his dominance in the White House, it is revealed that within the CIA, operatives have the habit of referring to Mr. Cheney as "Edgar," a nickname referring to the famous ventriloquist Edgar Bergen and his no less famous dummy 'Charlie McCarthy'.

Therefore, even if Rumsfeld is gone, there is still the political reality of a Bush-Cheney duo remaining in charge of American foreign policy, until January 2009, assisted by a powerful pro-war lobby and by neocon politicians deeply embedded in Congress. Even without Rumsfeld, this is still a truncated team that has demonstrated in the past its ignorance of, or its contempt for Islamic culture, for international law, for the fundamental principle of national sovereignty and for the most elementary humanistic principles of morality. Continued vigilance is thus required as future disasters may still be looming on the horizon. There is less change than meets the eyes. Vice President Dick Cheney, for one, has already stated that his administration's plans for the Iraqi conflict would not be altered, even if Democrats gain control of Congress: ¨We have to continue the mission."... "It's full speed ahead." This ominous attitude may be more a portent of things to come than the outcome of the Nov. 7 ('06) elections.

Rodrigue Tremblay is professor emeritus of economics at the University of Montreal and can be reached at [email protected] He is the author of the book 'The New American Empire.' Visit his blog site at: www.thenewamericanempire.com/blog