George W. Bush is the epitome of isolation, the ultimate pariah in his own country after divorcing Washington from the rest of the world, the result of six years of blind, pig-headed arrogance which has seen hundreds of thousands of families across the globe crying over their loved ones. This is the legacy of Bush, with or without the incompetent Rumsfeld. 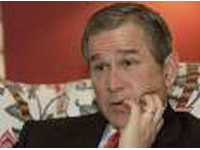 Bush trusted Rumsfeld and Cheney as a dog blindly trusts its owners. What Rumsfeld and Cheney were up to was patently clear during the Reagan days – expansion of US influence abroad, taking advantage of the Russian Federation’s external policy being less internationalist than the USSR’s, while expecting that international law would be upheld by the UNO. How wrong that idea was. That idea is OK in a world where everyone obeys the rules, something which Washington only does when there is a nuclear threat hanging over its head, for having been the only power to deploy such weaponry against defenceless civilians, Washington knows full well the effects.

George Bush’s Washington is the example of the adage “Laws are made to be broken”. While launching an illegal war in Iraq (albeit the attack on the Taleban was more understandable in the aftermath of 9/11), an Iraq without WMD, an Iraqi Government which did not even pose much of a threat to its own people, given that Saddam and his clique had virtually lost power, an Iraq which did not pose any threat at all, let alone an immediate one, to the USA or its allies, the Bush regime turned a blind eye to the outrages committed by the Janjaweed in Sudan or Morocco in Western Sahara (Where?)

Breach of the UN Charter. Breach of the Geneva Conventions. Torture. Child murder. Mass Murder. Use of military equipment against civilian structures. Rape. Sodomy. War crimes. Turning a blind eye to the ever-more frequent Zionist massacres of Israel, which are becoming so frequent that it is difficult to keep up with all of them. This is the legacy of George W. Bush.

The result is that however gullible the people of the United States of America were two years ago, when the Satanic Christians voted for Bush and per se in favour of murder, torture, rape, sodomy, two years on they have opened their eyes, taking the toys of power (Congress) away from the hands of the high-school bully who wished to use and abuse the noble institutions History had build for his country, a collective history of blood, sweat and tears, as he used and abused his people, using and abusing their confidence through the manipulation of fear, using bin Laden messages to create a climate of terror, using the Saddam death sentence as a palliative. But it blew up in his face. This is the legacy of George W. Bush, who goes down in the annals of History as one of the worst leaders any country of the world has ever had the misfortune to have.

Time for regime change. This man stiffed the world. This man broke international law. This man committed mass murder. This man, as C-in-C of his armed forces, is ultimately responsible for the acts of wanton slaughter, rape, torture, sodomy. This man is ultimately responsible for the deployment of military equipment against civilian supply structures. This man signed 152 death warrants. Saddam signed 148. This is the legacy of George W. Bush and to the end of his days, he will know deep down that it was Saddam Hussein who gave him this legacy.

This man lied. Saddam was telling the truth.

Where are the “We know where they are” WMD?

Game, set and match to Saddam.