Bush condemned to failure due to his disastrous policy in Afghanistan and Iraq. The “War without Success” policy pleases nobody, except the clique of elitist corporative crypto-fascists which gravitate around the White House, turning multi-millionaires into multi-billionaires at the expense of the North American people and the hundreds of thousands of civilians slaughtered by the Bush regime. 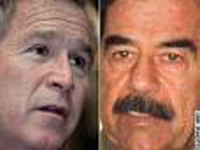 After six years of manipulating fear and his people, not even the death sentence against Saddam Hussein (“An immediate threat to the USA and her allies”) and his Weapons of Mass Destruction (“We know where they are”) could save Bush – since yet another cassette from bin Laden (“We are going to hunt him down and capture him”) would have been more than suspicious.

The truth is that the North American people have voted with a high turnout in favour of the law and in favour of international norms, and against policies of murder, torture, wars without casus belli and six years later, the penny has finally dropped – what makes the world much less safe is a blind, arrogant, bull in the china shop policy, which was only to be expected from a man so obviously intellectually challenged as George W. Bush and from a team which oozes overdoses of corporate greed.

The people of the USA do not trust George Bush and after six long years have finally understood what we have been telling them since before Bush was elected – that he is simply not up to the job.

Nancy Pelosi, the first female Speaker of the House of Representatives, spoke of “a new direction” after the Democratic Party had taken 228 seats against the 195 of the Republicans in a total of 435. From now on, the Democrats have a majority which gives them the possibility to season the last two years of the Bush regime’s policies. The race for the 33 Senate places open in this election could also give the Democrats control of this house.

While external policy was not the only reason for the abject failure of Bush (Democratic palliatives such as an increase in the minimum wage and questions such as corruption, scandals and the state of the economy, with a gigantic defecit and hundreds of billions of dollars wasted on acts of slaughter) it weighed heavily in the democratic decision taken by the citizens of the USA.

The citizens of the United States of América have finally joined the international community, agreeing clearly that the World would be a far better place without the likes of George W. Bush and his odious, criminal and murderous regime.

Time for regime change. (In the sidewings, the laugh of Saddam Hussein, who while moribund, imprisoned and without any power, after having signed 148 death warrants against Bush’s 152, can even so continue to defeat his foe).