There is only one question to be placed before the voters in the United States of America as we approach the 2006 mid-term elections: exactly what does your President think he is doing? 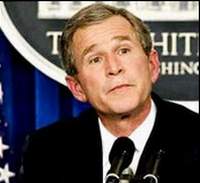 In his mind, there can be no doubt that he believes he is doing the right thing, making the world a safer place and protecting the good citizens of the United States of America, the country he loves (it is not a crime to be a patriot, despite what some say) and speading good around the world, toppling autocratic regimes and investing heavily in healthcare, doing the good work God told him to do. He certainly has the position to be able to do that.

However, to be President of the United States of America involves far more than thrashing around in a rage like a bull in a China shop. Things get broken, damage is caused.

While the PEPFAR initiative in developing countries (disease treatment and prevention) is laudable, the two wars launched against Afghanistan and Iraq are not. The first, although understandable in the aftermath of 9/11, cannot be justified while the influence of the drugs barons grows by the day, heroin once again flows on the streets of Central Asia and Europe (was this the Grand Plan?), the security situation grows worse week by week, the Government is restricted to a safe area in Kabul and the lot of the common citizen gets worse than under the Taleban.

As for Iraq, how can the campaign be justified at all? Firstly, there was no casus belli – the WMD did not exist and the authorities had to know this – the President lied stating more than once that they knew where the Weapons were and even that they had been found – the Secretary of State Colin Powell will go down in history as a barefaced liar at the UNO, that noble institution he insulted and slapped in the face with his “magnificent intelligence” which turned out to be a paper copied and pasted from the Net by British Intelligence from a decade earlier.

Secondly, the United States of America broke the UN Charter, breaching international law, and committed war crimes in Iraq, breaking the Geneva Conventions, destroying civilian structures with military hardware, then doling out rebuilding contracts in some cases without tender to people connected with the Bush regime.

President Bush himself has admitted that Saddam Hussein had nothing to do with international terrorism and everyone – except the people of the USA, it seems – were very aware of that.

The point is that your President, while well-meaning perhaps, does not know what he is doing. We all told you this years ago. It is a pity that yourselves and countless families around the world had to find out the hard way. Few today will place their hand over their heart, think of George W. Bush and say God Bless America.