"Terrorists" make a stand in Iraq. But who are the terrorists?

President George W. Bush declared in his speech at the Air Force Base in North Carolina this week that there is no timetable for a pull-out from Iraq, reiterating his belief that the war was justified because terrorists exist and are making a stand there, so the option is to strike first. However, who is the greater terrorist, he who murders New Yorkers or Iraqis? 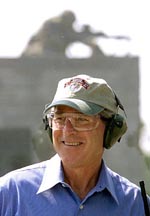 This type of speech is typical of Bush the political animal, fanning the flames of national pride, gung-ho and blind patriotism. One can almost hear the heartfelt choruses of God Bless America bawled out from hoarse-voiced and bleary-eyed rednecks, with their hands on their hearts and the star spangled banner in their eyes, those Christians who openly support and back acts of mass murder and torture on a scale unseen since Hitler and Himmler.

It is also a clear sign that the President of the USA belongs to that class of professional politicians that the world has become only too accustomed to, the ones who have a pathological problem with the truth. George Bush, no doubt happier dodging the cowpats on his ranch than with the comings and goings of the Oval Office, has spent the last four years since 9/11 telling a thread of mistruths and half-truths.

The manipulation of fear has been a constant factor in this greyish web of misinformation that Bush and his corporate elitist supporters have spun. But who are they trying to deceive?

Bushtalk: Saddam Hussein led an evil regime which had WMD, ready and poised to be used against the USA and its allies.

Fact: Lies. Saddam Hussein led a dictatorial repressive regime which held down Iraqi society outside the Ba'ath movement but which did not have any WMD, as is now so obvious.

Bushtalk: Saddam Hussein had links to Al Qaeda and bin Laden and was connected to 9/11.

Bushtalk: Iraq is crawling with terrorists who are making a stand in Iraq and it is better to confront them there before they attack American soil again.

Fact: Which kindergarten class did he play truant from? Iraq is crawling with reactionary political islamist forces which call themselves the "resistance" but who in fact are as oppressive of workers' rights and women's rights as the right-wing political islamists in the Washington-controlled puppet government. The reason they are making a stand there is because Washington attacked Iraq in an illegal act of butchery which contradicts any norms of international law.

Bushtalk: The US forces would attack Iraq and be welcomed by thronging, cheering crowds, waving flags and hugging the beloved liberation forces.

Fact: Most Iraqis want to get on with their lives. Most Iraqis are against the government imposed upon them, which is based upon political and ethnic divisionism and most Iraqis want the US and the "resistance" out because they are one and the same thing. The lot of the Iraqi people is worse since the American invasion and there is no hope of an improvement in the immediate future.

The fact is that this abominably planned and executed invasion did not amount to a war because the Iraqis did not fight. The army melted away without a shot being fired and George Bush has managed to create the reality of Iraqi society moving back one hundred years as the "resistance" took over while his troops were incapable, and still are, of controlling the country.

George Bush and his corporate elitist friends, in their greed to get their hands on Iraq's resources first and later those of Central Asia, have committed the people who voted for them to at least 12 years of conflict, according to the words of some members of the US administration.

Bushtalk: The US armed forces would conduct surgical attacks against military targets and this war would be marked by a minimum of civilian casualties.

Fact: The US armed forces have been guilty of one of the most horrendous acts of butchery seen in history. Up to a hundred thousand innocent people have lost their lives in Iraq since the invasion because the US armed forces prefer to destroy a whole block than to face a sniper.

George Bush, creating and manipulating fear as a political weapon against his own people. It appears that he is not as stupid as people said he was. In fact he is making clowns out of the citizens of the United States of America. He may have dodged the draft but how many American families are going to be brought to grief over the next decade and a half just because George W. Bush was manipulated into following the agenda of his corporate elitist, super-rich supporters.