As long as we continue buying into this self-perpetuating myth, it will be true. Who do you think has the most to gain from promoting it?... Yep, those same Democrats and Republicans that want to make darn sure they stay in control. 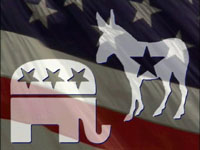 Can voting an alternative candidate really be considered a wasted vote?

After watching the ever-increasing antics of our Congress over the past several years, I am convinced that voting either Democrat or Republican is the wasted vote! I am tired of never having more of a choice than that of deciding between two evils – its time for another option or two, or even three or five.

The single/two parties currently in power spend big, big, money on their campaigns. And believe it: the lobbyists, big corporations, the power mongers of all stripes, usually give money to both sides to cover their bets! They certainly do not want you to have other options.

After all, they might not be able buy everyone under that scenario. One party, that appears to be two, makes things quite manageable. In fact, it’s perfect because it is so easy to pretend to play them against each other, in order to feed the myth that we have a choice.

Sadly, the reality appears to be that our representatives have become little more than poor actors in entertainment news, that spend their efforts enriching and protecting themselves and their friends. All the while telling us it's for our benefit, of course.

The Democrats and Republicans are one party, the same party - watching and covering each other’s backs. They were one party from the beginning and they remain one party in all but name and popular thinking.

We have a system in which it is all but impossible to be elected to anything but a very minor office, without accepting mega-bucks from “sponsors” and lobbyists (unless of course, you are already rich from your own corporate dealings.) What that leaves “we the people,” are representatives whose vested interests are in representing the rich and corporate interests. – Haven’t we seen it again and again? Most are ‘bought’ – they owe favors and had better produce, if they want funds for their next (re)election bids or one of those sweet corporate payback jobs, once they leave public office.

So, a wasted vote?

Well, I suppose so, if all you want is more of the same, and as along as you continue to believe there is some real difference between the Democrats and Republicans.

For my part, I look at the Democrats currently in Congress and ask myself, “Where have you been the last six years? Why have you been party to the complete destruction of our constitutional rights, to creating an unimaginably huge debt for our grandchildren and great-grandchildren, to allowing corporations to run rampant over the worker, the environment, and the law - all for the sake of more profits for the CEOs and stockholders (oh, and especially those military contractors). Then there is the rubber-stamping of first an illegal war, then torture, the mass destruction of another country which happens to have something we want control of (oil), and so much more. Am I really supposed to believe that if a few seats switch control, things are going to be any different? Really?

The list was recently topped off with retroactively making many of the administration’s illegal actions un-prosecutable! Retroactively! That is, again and again, once the Bush administration has been caught doing something illegal, that he previously swore wasnot happening (like torture,lying in order to make a case for war, disregarding our constitutional rights one after another) our supposed representatives have gladly passed laws to make illegal actions, legal, after the fact. Nice deal! And you can see the results, because of course, when one of the Congress is caught doing something illegal, the other members protect them as much as possible. Of course, they will also turn like wolves when cover-up becomes impossible, or it just becomes more convenient to ensure their own personal re-election bids. Nice guys (and a few gals) – the kind you want your children looking up to – the kind you want them to model their lives after!?!?! (NOT)

We have wolves in Washington, people - vicious wolves! Well actually, my apologies to Wolves everywhere, in reality a respectable animal – but I think you get my drift! Sometimes it seems that pond scum has more honor than some of these people do. And the reality behind this, is that they are only the puppets (apparently willing ones) for those who feel they must control the world, and for whom we are all ‘collateral’ - whether we are willing to see it or not.

These people, who pretend to represent us, are allowing, condoning and participating in the rape this country - of our rights, of the average person’s ability to work and feed his/her family or provide basic necessities, of our environment…and so much more, like the rape and pillaging of other countries.

They claim to want to leave no child behind – but in reality this meant a lot of fast-talking and b.s., and just about zero funding. The reality – it’s about ‘dumping down America’ and making sure no child is left behind whenthe military recruiters come trolling our schools for our very children. They come with their lies of free training and education, exciting travel, and blind patriotism. We all (ought to) know the reality of the hell they are throwing our own children into, not only endangering life and limb, but mental stability and their very souls - brainwashing them before they are old enough to know better. Telling them that they are responsible for their actions, but court-marshalling any whose conscience leads them to accept that responsibility, by refusing to take orders they feel are illegal. [Just like they court-marshall and throw in jail those (of low rank) who are caught following orders that are later inconvenient.]

Want more of the same?

Keep alive their much-needed myth that a vote for anyone else is a wasted vote. As long as you believe it, it will be true.

It’s way past time to stop listening to the liars, the users, those who claim to represent you and then represent nothing but themselves and their corporate sponsors.

Time for a change! A real change – not just substituting Tweedle-Dee for Tweedle-Dum.

Vote an Alternate Party and send a message: NO MORE!

Time to take this country back from special interests, time to make it once more a country of: “We the People,” instead of “We the Used and Abused.”

Time for some of those unbearably burdensome taxes we pay more and more of every day (unless you are rich enough not to have to pay taxes) to actually do something for those of us paying them.

VOTE – anything but Democrat or Republican, unless of course you actually like where you see this country going.