Political culture of lies and war

As a principle, a democratic government should not rely on misinformation, half truths and outright lies in order to defend its public policies. Indeed, public affairs should be discussed in the open and policies judged on their merit. To do otherwise is to betray the necessary trust a responsible government must have with the citizens. But everybody knows that politicians do lie, and the more they get away with it, the more they resort to this subterfuge. 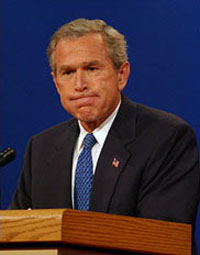 Political culture of lies and war

On September 25, 2002, for example, President George W. Bush uttered a big lie that was bound to have disastrous historical consequences. It would lead to one of the dumbest wars ever. In his search for fictional reasons to attack Iraq, he said: "You can't distinguish between al Qaeda and Saddam when you talk about the war on terror." This was a lie because American secret services had long established that secularist Saddam Hussein considered violently religious Osama bin Laden to be an enemy. A bi-partisan U.S. Senate panel has confirmed that Saddam Hussein had rejected overtures from al Qaeda and believed Islamic extremists were a threat to his regime. This was completely different from the portrait of an Iraq allied with Osama bin Laden that the Bush-Cheney administration painted in order to initiate a war of aggression against Iraq . It was thus impossible to have al Qaeda operatives being trained in Iraq (as they were in Taliban Afghanistan). With that lie, Bush was trying to mislead the American people into supporting a war against Iraq that he had intended to launch even before he became president.

Therefore, the war against Iraq that George W. Bush launched on March 20, 2003, was a premeditated war of choice, not a defensive war of necessity. In fact, the 2003 unprovoked American military attack against Iraq looks like a repetition of the unprovoked 'preventive' attack that imperial Japan launched against the United States at Pearl Harbor, on December 7, 1941.

Bush's second big lie was the one about Iraq supposedly having a stock of weapons of mass destruction about to be used against the United States. On September 12, 2002, Bush II said emphatically, "Iraq has stockpiled biological and chemical weapons, and is rebuilding the facilities used to make more of those weapons." This false assertion was repeated time and again by President George W. Bush and by his Vice President on numerous radio and TV networks. The Bush-Cheney administration was publicly accusing Iraq of having hidden unconventional weapons and was pressuring it to pledge to stop producing or concealing such weapons of mass destruction. On October 8, 2002, in a speech delivered in Cincinnati, the American president raised the level of fear even higher, declaring that "we cannot wait [before attacking Iraq] for the final proof, the smoking gun, that could come in the form of a mushroom cloud."

In fact, the Bush-Cheney administration had been told by their own secret services that Iraq's WMD capability had been essentially destroyed in 1991, more than ten years before. But it was not the purpose of the Bush-Cheney administration to use intelligence in order to better the decision-making process. What Bush II and his Neocons intended was to use and twist intelligence to justify political decisions already made. For David Kay, the former head of the Iraq Survey Group, the Neocons' claim that Iraq had weapons of mass destruction was simply "delusional." And even today, the campaign of disinformation continues, because the situation in Iraq is much worse than what Bush II and the Pentagon are saying in public.

At the end of the day, all these lies and distorsions have paid off big politically for the Republican Party. Bush's political adviser, Karl Rove, obviously inspired by the movie 'Wag the Dog', was able to plan both the 2002 mid-term elections and the 2004 presidential election around the theme of fear and terror: his programwas to picture a mediocre and devious politician as a "war president" fighting terror around the world, dressed up in the American flag.

The Democratic leadership was so hoodwinked by this strategy, that Dick Gephardt, the then House Democratic Minority Leader, for example, was anxious to be photographed with George W. Bush in the fall of 2002, when the latter was making his warmongering pronouncements. Gephardt was naive enough to believe that by jumping onto Bush's war wagon, the Democrats could win 40 new seats and take control of the House. Instead, as it was amply previsible, the subdued Democrats lost 5 seats in the House. Bush and Rove were lucky to have such confused adversaries. Karl Rove is now trying to apply the same ploy to the 2006 mid-term elections. It remains to be seen if the Democrats will fall into the same trap.

And then, there was torture or, in Orwellian speak, 'enhanced interrogation techniques'. Because of George W. Bush's decisions about torturing prisoners or so-called "enemy combatants", with the advice of devious and crooked-minded lawyers, the United States is seen around the world as a country that violates the Third Geneva Convention against torture and which routinely authorizes the mistreatment of prisoners. The Bush administration's use of torture at the Abu Ghraib and Guantánamo prisons is a well documented fact.

Also, because of George W. Bush's decisions about detainees, there are 14,000 people in secret American gulags with hardly any legal recourse, a situation which is contrary to international law but also, to American law. What's more, torture in Iraq, according to the United Nations' chief anti-torture expert, is now worse than it was under the regime of Saddam Hussein. This unenviable record places the American president in a very precarious legal position because he could be accused of war crimes and impeached for such offenses.

Realizing that, Bush is now desperately trying to save himself by having the U.S. Congress retroactively modify both Article 3 of the Geneva Convention and the U.S. War Crimes law, even though such a move would be unconstitutional, since no law can be erased retroactively, under the U.S. Constitution. It even seems that American military lawyers have been coerced to go along with an illegal practice they have themselves denounced before. Indeed, after the U.S. Supreme Court ruled on June 29, 2006 (in a 5-3 decision) that President Bush violated both American and international law in his effort to railroad Guantanamo Bay detainees in kangaroo courts, some legislative cover was thought to be required. On September 28, 2006, Congress pretended to want to curtail somewhat the President's power to use torture, but finally approved a bill that suspends the eight century old right of Habeas Corpus for detainees at the Guantánamo Bay prison in Cuba, by stripping them of the right to challenge their detention in court. With this new law, the American Congress is now officially on record as going along with the Bush administration in legalizing the recourse to future torture techniques by U.S. government agents, thus confirming the moral decadence of the United States and its decline among democratic nations.

In conclusion, it can be said that the Bush-Cheney's addiction to lies and to war is a major threat to the United States itself, to its liberty and to stability and freedom around the world. This decline of democractic principles and in public morality, concomittent with the recourse to ever more sophisticated armaments in military conflicts, is a direct threat to the survival of humanity.

Rodrigue Tremblay is professor emeritus of economics at the University of Montreal and can be reached at [email protected] yahoo.com. He is the author of the book 'The New American Empire'.

Speak your mind on Pravda.ru English Forum. Registration is free!