Afghanistan: More of the same

There is no squabbling so violent as that between people who accepted an idea yesterday and those who will accept the same idea tomorrow. (Christopher Morley) 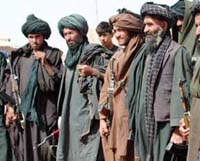 Afghanistan: More of the same

I don’t know if you have paid any attention to the news coming out of Afghanistan or not; but if you did, you probably think that NATO forces are winning the war. The headlines are full of stories about how NATO forces have killed so many Taliban fighters in battles in the south of the country. Yet at the same time we hear that soldiers’ moral are on the decline and that they have to fight almost 18+ hours a day without rest. Confusing the picture further are the desperate pleas coming out of NATO headquarters for more troops and equipment. What is happening in Afghanistan? It is becoming frighteningly similar to what the Soviets were saying and doing in Afghanistan.

Albert Einstein is quoted as defining insanity as doing the same thing over and over again and expecting different results. Anyone even remotely familiar with the Afghanistan’s history can tell you that what NATO is doing in Afghanistan will not produce anything except more of the same: death and misery. The British tried several time (1839-1842, 1878-1880, and lastly in 1919) to conquer this land without success. The Soviets tried it (1979-1989) and failed. Now NATO is pleading for more troops. Soviet Union had almost 300000 troops in Afghanistan and couldn’t control the land, and now NATO wants to do it with a fraction of that number. It is not possible.

These invasions and wars have scared the Afghan psyche. They do not expect anything good from foreigners that enter the country in tanks. NATO troops coming all the way from US, Canada, Poland or England do not understand the culture, customs or languages of Afghanistan. In a documentary on TV, American Special Forces were seen to surround a village kick in doors and interrogate people. When they were leaving they gave some toys and candies to some kids. Kicking doors and interrogating people under the gun does not win hearts and minds. The toys and candies do not remove the terror from children’s mind either. Since they can not communicate their intentions (culturally), they tend to give the wrong impression.

To make matters worse, Taliban do not wear uniforms and are therefore very difficult to distinguish from the local civilians. When NATO announces that they have killed 200 fighters in an air raid etc, you can be sure that at least half of them were innocent civilians having nothing to do with the conflict. We can be sure that these kinds of air attacks will help Taliban rather than hurt them. The families of those killed will become more sympathetic to Taliban and may even join them. The situation in Palestine and Iraq doesn’t help either.

A recent report by the respected European think-tank, Senlis Council, which focuses on Afghanistan, paints a very bleak picture of the situation in the country.

“There is a clear belief among Afghans of all ages in southern Afghanistan that the current conflicts in Palestine, Lebanon and Iraq are all manifestations of a wider conflict between the ‘West’ and the Muslim world, by which the West, led by the United States, is attempting to ‘re-colonise’ Islamic States in order to expand its global control. A recent survey on Afghans’ perceptions of the West indicates that such beliefs are widespread throughout Afghanistan.

NATO, an organisation that was created to defend Europe against Soviet Union is somehow suddenly involved in an un-winnable war in Afghanistan. There was a time in early 2002 when NATO was not needed; when Taliban had very little support among the local population. But Bush ignored this opportunity and instead of building on people’s goodwill invaded Iraq, a country that had nothing to do with Terrorism. On top of that, Bush, by including Iran in his “axis of evil” destroyed any chances of stabilising Afghanistan.

We must not forget that US did not so much invade Afghanistan as provide Special Forces and air support to anti-Taliban groups, most of which were supported and armed by Iran. It was these forces and Iranians that actually facilitated the downfall of the Taliban. For example, the important city of Heart and the central province of Bamyan were captured with the help of Iranian Special Forces and their local allies, “What the Americans were after was for an Iranian elite unit to cross into Afghanistan, infiltrate Herat and form insurrectionary cells to rise up against their Taliban masters when the Northern Alliance attacked the city. Generals Franks and Safavi agreed on a plan and shaped its details. It worked like clockwork. Iranian commandos set up a secure base for themselves in Herat. A group of eight to 10 US Special Forces officers joined them as the advance guard of the Northern Alliance. Under an Americans guarantee, the thrust into Herat and the central Afghanistan province of Bamayan was left entirely to the forces of the Shi'ite militia chief, former governor Ismail Khan, and no one but the Shi'ite Hazara ethnic contingents led by Karim Khalili were deployed in the city and region. On these terms, Iranian agents organized the local insurrection as arranged and the rebel leader invited the Northern Alliance, or rather, Ismail Khan, to liberate the town.”

Later when people began to talk about the Iranian involvement in the war, US had to acknowledge this fact.

“On Sunday the 11th of Nov, Donald Rumsfeld the US secretary of Defence admitted that Iranian and US military advisers are working side by side with Afghan opposition forces trying to bring down the Taliban: “There are places in that country where there are some Iranian liaison people, as well as some American liaison people.” Rumsfeld added that as a nation bordering Afghanistan, Iran has “a legitimate interest in what happens in that country and can influence events on Afghan soil.”

Iranians were involved in all aspects of the Afghan war of 2001. Even after the war when there were problems with creating a unity government, it was again the Iranians that used their influence and friends to break the deadlock in Bonn, Germany. But Bush’s “axis of evil” speech effectively ended the Iranian’s support.

Iranian government was looking forward to warmer relations with US and had hoped that its considerable help in Afghanistan would be rewarded with an opening of a dialogue with the US. So it was a considerable shock for the Iranians to hear that the US had included them in the “axis of evil” and was demanding a regime change in Iran. They felt betrayed.

The result has been catastrophic for Afghanistan, US and apparently for NATO. United States and the rest of NATO now face a difficult problem: like the Soviets before them, they can continue to fight for the next ten years or change tactics and bring in forces from Islamic countries. But again other problems such as Palestinian issue and Iraq stop Islamic governments to be seenhelpingNATO.Iraq is anewproblem and once the US forces leave Iraq will be resolved. However the Palestinian question will remain and unless and until this problem is not resolved the US will have problem with the Muslim world.

It is doubtful if the Europeans or Canadians are willing to accept a long and expensive war in Afghanistan. It is becoming clear that the human cost of this war is going to be high, and with no end in sight, various countries may decide to pull-out. Already many countries are refusing to send more troops to Afghanistan. As the time goes by and the number of the casualties rises, their commitment to stay in Afghanistan will weaken. Eventually they get tired of killing and having their young men killed. In the end they will leave and we end up where we started. The only difference will be that now Canadians and Danes and others are added to the list of people that have killed and were killed in Afghanistan.

Of course this is a somewhat optimistic picture. The situation can worsen quickly if other actors decide to enter the fray. For example Iranians may decide that it is in their interest to actually help Taliban rather than ignore them (as they do now). This can happen if US makes good on its threat of imposing further sanctions on Iran. If that were to happen, anything short of the 300000 troops will not be enough to even hold the major cities and towns let alone the whole country. Another nightmare scenario: President Musharaf of Pakistan is overthrown and the country falls into chaos. What would happen then? There are already over 70000 Pakistani soldiers on the border trying to stop arms smuggling from Pakistan to Afghanistan. Imagine what would happen if those troops were withdrawn. So far the insurgents are using small arms. If they get hold of modern weapons such as anti-tank wire guided missiles the NATO casualty rates would quadruple in no time at all.

It is obvious that there are two countries that play an important role in Afghanistan: Pakistan and Iran. Pakistan already is doing everything that it can (considering its internal problems). This leaves Iran. Iranians have shown that they can be a constructive force in Afghanistan. They have helped Afghans to make Herat a model city, where people can live and work in peace. The areas controlled (north) by their friends are very stable and relatively quite. They know the people, the terrain (similar to Iran), know the culture and are Muslims. If they are engaged properly, they could persuade other Muslim countries such as Malaysia, Indonesia, and even Egypt to take over from NATO and stabilise and rebuild Afghanistan. It will also affect the situation in Iraq. A rapprochement with Iran will reduce tension in the region and stabilise the situation in Iraq and strengthen the Iraqi government.

Afghans are a proud people and have to be treated with respect and understanding. If there is going to be changes in their culture or their way of life, it has to be done slowly and from within and not imposed from outside; and certainly not by forces that they associate so much with Israel. Securing and rebuilding of Afghanistan has to be done by Muslim countries and its neighbours. It is in their interest to see a stable and prosperous Afghanistan. United Nations and NATO should work with these countries to create a modern and peaceful Afghanistan. Using only NATO will just increase the tension in a region that is already highly unstable.

Dr. Abbas Bakhtiar lives in Norway. He is a consultant and a contributing writer for many online journals. He is also on the editorial board of CASMII. He's a former associate professor of Nordland University, Norway.
[email protected]

Speak your mind on Pravda.ru English Forum. registration is free