Five years on, one must first and foremost remember the victims of 9/11, their families and loved ones. 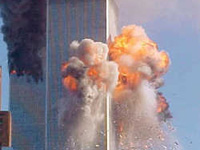 On September 11th 2001, 3000 civilians were murdered in terrorist attacks in the United States of America. From 2001 to 2006, hundreds of thousands of people have died as a consequence in attacks, some of them terrorist attacks, by the forces of the USA and her allies. Has anything been achieved?

Ask anyone if the world is a safer place now than on September 10th 2001 and nobody would agree it is. We are moving closer and closer to global conflict as tensions rise in reaction to a continual upping of the stakes by those who defend a unilateralist approach to crisis management.

The great victim on September 11th 2001 was not the United States of America, or the people of the USA. It was international law. 9/11 gave rise to two notions: that the power of the individual (Usama bin Laden) could challenge a State and that a State could break every law in the book by descending to the level of the individual, perpetrating terrorist activities but escaping blame and punishment.

Washington responded to a terrorist attack by launching war on two countries, Afghanistan and Iraq, the first with clear connections to international terrorism and the second clearly without – the search for WMD has after all proved as effective as the quest to find bin Laden.

Had France launched a war on Corsica, had Britain launched an all-out offensive against Ireland, had Cuba attacked the United States in response to the Posada Carriles terrorist attacks, all hell would have broken loose, with Washington screaming the odds at the centre of the storm.

In the case of Afghanistan, the attack was more or less justified in public opinion by the international community’s shock and horror at seeing everyone’s worst nightmare – passengers sitting terrified and powerless as a handful of fanatics flew planes into buildings.

Yet five years on, what has been achieved in this country? The Soviet occupation taught NATO a lesson – not to engage in high-intensity operations, which cost the Soviet armed forces 15.000 deaths in a decade (1979 to 1989). Therefore, NATO troops have avoided confrontation at all costs. However, the official figures are curiously low – just 474 deaths and 901 injuries between 10/10/2001 and 09/08/2006. Yet taking just the month of August 2006, we find, from reports coming out of Afghanistan and which are corroborated by a number of sources, that between August 1st and 28th, a total of 73 NATO troops were killed plus the occupants of 9 vehicles destroyed in three locations (Helmand, Zabul and Artawa).

Either this is due to an absence of confrontation, or is it that now NATO has started to engage, the casualties are starting to rise? And what has NATO been doing there if five years later, the Taleban and Al Qaeda seem able to concentrate hundreds of heavily armed combatants and deploy them at will?

What has NATO done to stop the opium trade, once again arising from the chaos which ensued the fall of the Taleban and once again increasing in intensity? Five years on, can anyone say NATO has achieved anything, especially when Afghani officials have even suggested having a quiet word with Mohammed Omar, the Taleban leader?

As for Iraq, one could write a book about the illegality of the conflict, the cruelty of the assault and the wanton crimes committed against civilians during three years of occupation, and for what?

Where are the Weapons of Mass Destruction? Why were rebuilding contracts handed out to White House cronies without tender? Why was the Government deposed? Why were civilian structures targeted? Has the insurgency been defeated?

Is the world a safer place? These are the questions posed five years after 9/11.

If a man retaliates to his house being bombed and his family killed by eliminating every family member of the person who perpertrated the outrage, dousing the culprit with gasoline, throwing at match at him and then razing his property to the ground and then asks, “Well what was I supposed to do, stand back and say thank you?” the answer would be no, but you went too far. For an individual.

However, although the individual in the case of 9/11 challenged the State, the State has the responsibility to act like a State and not to behave like an individual. Part of this responsibility is using the international organisms for crisis management (UNSC) not deriding them and skirting round them.

The damage having been done by the Bush regime’s knee-jerk reactions (understandable in the case of Afghanistan, wholly wrong in the case of Iraq), it is now time for damage repair strategies.

At the level of prevention, surveillance must be maintained but not at the expense of infringement of individual rights built up over hundreds of years, through the manipulation of fear. Suspects must be interrogated but not tortured, they must be charged, they must have the right to legal counsel and they must be brought before a court of law within a reasonable period of time. What the Bush regime has done at Guantanamo is to mix Belsen with some Banana Republic notion of justice. In short, an insult to the collective history of the USA and everything it ever stood for.

At the level of strategy, international terrorism exists, although perhaps Al Qaeda is not the single, unitary organism which the US authorities claim; instead it appears more like a disjointed group of wannabe individuals whose clumsy attempts at terrorist activities would be risible if they were not so dangerous.

Yet history has taught us that terrorist groups can be engaged in conversation and can be made to bring their fight up to a political level. Recognising the main cause behind Al Qaeda’s and all Islamist fundamentalist campaigns as being Israel’s illegal occupation of lands which do not, and never did, belong to it would be a good start in reducing the tension.

Forcing Israel to live within its frontiers, internationally recognised frontiers drawn up by the UNO, would be a positive second step. Disengaging from Iraq and Afghanistan while allowing the UNO to do its work, which it does so ably if people respect it and support it, would do the rest.

Finally, if the so-called civilised world treated the Islamic countries with respect, without intruding on their culture but allowing them to allocate funds as they saw fit, much could be done to reduce endemic poverty which provides the human fuel for extremism.

Five years on, one must first and foremost remember the victims of 9/11 and their families and loved ones. But these people deserve far more than see their suffering stand for a manipulation of people and a derision of law, which is what 9/11 has become in the able hands of George W. Bush.