Bush and the Ideological Fight of the 21st century 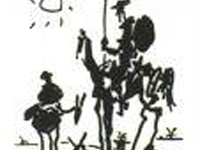 Bush and the Ideological Fight of the 21st century

Basically, this speech was the latest in a tournee of speeches that the US President will give as his popularity hits crisis proportions, a desperate attempt to justify his disastrous foreign policy which has so far squandered hundreds of billions of USD in dubious campaigns in a possible run-up to confrontation with Iran, after having given Israel a carte blanche to perpetrate massacres of civilians and war crimes. Popular with nobody, not even with his closest allies.

If one can say one thing about George Bush, at least he is consistent but were he to actually shoot himself in the foot so regularly with real ammunition, he would no longer have any feet to walk upon. For a start, comparing Communism to totalitarianism is as naive as it is wrong, it is as simplistic a notion as it is puerile and ill-formed.

The very principles of Communism are freedom and democracy, debate, dialogue and discussion (“Soviet” for instance means “advisory committee”). Communism stands for universal access to education, excellent public services such as healthcare, transportation, cultural activities for leisure time, a work ethic which includes leisure as part of the daily routine, free housing, a guaranteed pension and essential living conditions.

Given that the USA was the leader of the “free” world which spend trillions of dollars sabotaging the Communist experiments, forming belligerent alliances which in turn forced the countries adopting the Socialist model to squander resources while trying to protect the State against the Imperialistic onslaught led by the moneyed few who pull the strings in Washinghton and elsewhere where the centres of finance and decision making are based, making snide remarks about Communism being totalitarian would appear a trifle misguided, to say the least. A classic Bushism.

Not to mention the extremely successful Socialist models in practice in countries such as Sweden and Fidel Castro’s successful recreation of a Socialist model despite standing practically alone, the Socialist countries provided admirable social programmes for countries coming through years of oppression, for instance the tremendous support given to emerging African and Latin American countries between 1945 and 1989 and the continuing support provided around the globe by Cuba, despite the stifling blockade. What were the USA’s contributions to Latin America and Africa in the same period? Operation Condor and Mobutu Sese Seko, whose excuse for not building roads was that rebels might use them to arrive in Kinshasa more quickly.

The second point is that George Bush has still not grasped the basic facts behind international terrorism or any other terrorist cause: the fact that such people are called terrorists and not common criminals and murderers is because they have a cause and the cause fuelling Islamist terrorism is basically the fact that Israel sits on occupied lands which do not belong to it and that this state refuses to abide by international law. Take away the cause and you destroy the terrorist ideal, revealing what is basically a collection of warped and fanatical individuals who have nothing better to do than take away life – theirs and that of other innocent victims.

George Bush’s war on terrorism is no more than a lame justification for Washington to expand militarily without any casus belli or legal precept around the world in strategically important locations – this was the grand plan formed by Cheney and Rumsfeld years ago and this is the grand plan we see unfolding in front of our eyes.

Saddam Hussein and Iraq were nothing to do with international terrorism – Osama bin Laden and Saddam Hussein were opposites in the Islamic world and there was no connection between Saddam Hussein and WMD. Moreover, Mohammed Omar, the leader of the Teleban movement, had declared to Pakistan’s Dawn newspaper in 1998 that the USA would find any pretext to attack Afghanistan because Kabul had refused to accept a bribe in return for a gas pipeline from Central Asia through to Pakistan. Take a look at the map, and now locate Iran.

George Bush is wrong when he states that the Islamist movements are single and unitary – they are not. They are disjointed, poorly coordinated, ill-equipped, in short, little more than a mottley of bored kids who have allowed themselves to be brainwashed by evil cowards who get them to do their own dirty work for them. George Bush’s unitary movement of terror is in fact a handful of teenagers using tennis shoes instead of missiles, shampoo bottles instead of bombs and airplane tickets instead of war plans.

A good example is provided by the Aceh Freedom Movement, which struck a deal with Jakarta (after having been accused of being part of Al Qaeda) and further examples could be provided by Islamist movements who oppose Israeli occupation of Palestinian lands, making the jump from military operations to political movements. However this is only possible when the world lends an ear to listen and so long as such movements do not have any other Forum through which to express themselves, other than through violence, they will continue to exist as terrorist organizations.

For the cycle of violence to stop, it is necessary to adopt an intelligent arttitude, as Tony Blair did in Northern Ireland, providing a space for the ideas to be debated. In the case of international Islamist terrorism, the cause is provided by Israel and it would seem obvious that removing the cause, instead of stoking up the fire by sabre rattling, would do far more to creating a peaceful world – which was to be expected on the threshold of the third millennium.

All George Bush has provided us with at the beginning of the third millennium is two unwon wars and the prospect of the third one, each one more devastating than the last. Why this man does not concentrate more on initiatives such as PEPFAR, investing resources to save lives and create a sustainable future for millions of people, defies logic. Here George Bush holds his passport towards eternity, not in his unilateralist fight against Quixotic chimeras.