Exactly when Israel’s international image hits rock-bottom and when the international community sees for itself the depths to which Tel Aviv will sink while claiming it is a State yet acting like a terrorist organization, a new militant group pops its head up in Gaza, kidnapping western journalists. In a flash, the 1-0 victory becomes 2-1 against in the hearts and minds of the western international community. 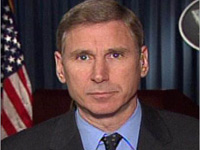 Curiously, exactly when Israel had proved once and for all beyond any doubt whatsoever that it is incapable of behaving like a State but rather like a terrorist organization, losing any little sympathy it had left in the international community (what after all is the difference between Hezbollah launching rockets against Israeli civilians and Israeli military forces blasting civilian homes and then claiming the civilians should not have been there?) an unheard-of militant group called Holy Jihad Brigades appears in Gaza and says it is behind the kidnapping of two western journalists on August 14th.

The Fox correspondent Steve Centanni and his cameraman Olaf Wiig were seized by masked raiders in Gaza City on August 14th. The Holy Jihad Brigades now demand that the Moslems held by America be released within 72 hours: “Release what you have and we will release what we have”, reads the fax.

If the Palestinian cause wanted anything which could so rapidly neutralise the propaganda victory in the aftermath of the Israeli massacres in the Lebanon (strafing funerals, slaughtering children in their homes, targeting power stations, committing acts of environmental terrorism, targeting civilian structures with military hardware) it is this.

It is crystal clear that neither these extremists, neither the Israelis, understand the western psyche.

It runs on two principles: the underdog always wins and he who has a machine gun loses the battle when he fires on an assailant who attacks with a pea-shooter. The British Armed Forces did not blast civilian blocks to the ground in Northern Ireland, the French did not devastate Corsica, the Spanish did not raze the Basque cities. Israel does not gain any points by behaving like it did and then by trying to wriggle out of it by claiming they tried very hard to reduce civilian casualties. By targeting power stations? By deploying cluster ammunition against hospitals? Tel Aviv’s claims fall of deaf ears because principle number three, is people are not stupid.

Yet just when Israel appears definitively and clearly as the bad guy, what happens?

Since most westerners either travel themselves, or have family members who travel, there is an innate fear at the back of everyone’s mind that a loved one will be taken captive in an alien culture. It is everyone’s worst nightmare and strikes to the chord of the western collective psyche. “Savages!” is the knee-jerk reaction.

So the Holy Jihad Brigades can congratulate themselves on having neutralised any propaganda gains from the month-long conflict with Hezbollah, since if they are going to kidnap western journalists, how much better are they than the Israelis?

Parading innocent civilians such as Steve Centanni and Olaf Wiig on television speaking about their families could not make worse inroads into the collective western psyche against the Moslems, Islam, Palestine cause, collectively.

The only way in which this group is going to gain anything is by releasing these two innocent civilians immediately, showing magnanimity (a great quality of Islam) and being great enough to provide mercy.

Release Steve Centanni and Olaf Wiig now and gain something, or else destroy any gains made over the last month.