The response by Hezbollah to the UN Security Council’s Resolution on Friday was to fire a salvo of 20 rockets at Israel and Israel’s response is to launch large-scale incursions into southern Lebanon. However, with Lebanon’s Parliament set to vote on the Resolution today and Israel’s Knesset set to decide tomorrow, hopes are alive for a speedy end to the fighting. 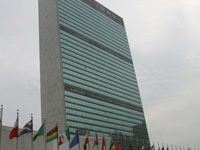 It took the UNSC one month to reach unanimity on this issue, causing Secretary-General Kofi Annan to express his “disappointment” at having taken so long. Nevertheless, the fact that the international community has been able to come together today is a clear sign that it will be committed towards rebuilding Lebanon tomorrow, a country which sustained billions of USD in damages to its civilian infrastructure, targeted by Israeli military equipment, apart from seeing one thousand of its citizens murdered in Israeli terrorist attacks.

Israel in turn sustained 120 losses (mainly soldiers) and serious damage to civilian infrastructures in the north of the country, in terrorist attacks by Hezbollah.

The Resolution calls on Hezbollah to cease all attacks immediately and on Israel to cease all offensive military operations.

Under the plan, the Israeli armed forces are to withdraw from Lebanese territory “at the earliest”, while the Lebanese Armed Forces deploy to the border, backed up by a 15,000-strong UN Interim Force in Lebanon (UNIFIL) with a prolonged one-year mandate and enhanced scope of operations, monitoring the cessation of hostilities, delivering humanitarian aid and guaranteeing the return of displaced persons.

Under the agreement, the area in southern Lebanon between the Blue Line (frontier) and the Litani River is to be free of any armed personnel other than the Lebanese Armed Forces and UNIFIL

Regarding the question of prisoners, the text calls for“the unconditional release of the two abducted Israeli soldiers,” but also recognises the importance of the need to solve the question of hundreds of Lebanese prisoners held in Israel.

The UN Human Rights Council also passed a Resolution condemning “grave violations” of human rights by Israel in Lebanon and is to send a high-level team to investigate these war crimes.

Should these measures fully enter into force, all the parties save face. Israel sees its northern border far more secure and sees Hezbollah chased out of southern Lebanon, Hezbollah exchanges two prisoners for several hundred and can state that it inflicted serious losses on Israel and the Lebanese government finally gets to control all of its territory, while the UN can claim that it brokered a successful deal.

On the flip side of the coin is how it took one full month for the international community to reach agreement, how Israel could perpetrate full-scale massacres of civilians without any regard for human life, how Hezbollah thought it was going to gain anything by firing rockets at civilian residential areas and how the families of some 1,120 people on both sides of the frontier are ever going to forget 12th July to 12th August 2006.