Once again, the international community stands polaxed while innocent civilians are murdered on both sides of the frontier, amid callous comments which demonstrate a total disrespect for the human condition, a total disregard for human life. 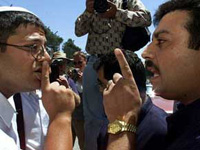 “They are Jews and must be destroyed”. “They shouldn’t have been there” (in their own homes). Two cold, callous comments showing a shocking degree of insensitivity towards the basic right of civilians to safety in their own homes. Whether by a non-State initiative (Hezbollah) or by the State (Israel), blatant acts of mass murder have been committed against defenceless civilian targets. In short, terrorism and war crimes.

With sickening predictability, the media circus swung into action and churned the story out in their sickeningly predictable ways, the right-wing “bought” press speaking about Hezbollah’s acts of terrorism, Israeli “strikes” and showing soundbites about Israel’s right to protect itself after unreasonable provocation. Other outlets broadcast reactions of horror to Israsel’s disproportionate response by a growing number of public officials. Some of us decided to undergo the usual gauntlet of hacker attacks, death threats on personal e-mail accounts, just because we stated the truth, namely that there have been terrorist attacks by both sides against both sides.

In short, this approach to the news produces messages of pure, seething hatred, the same type of actions as those undertaken by the IDF against Lebanese children, which provoke the same reactions.

And as usual, the international community looked on, impotent, tut-tutting.We remember Rwanda, we remember Bosnia, we remember Darfur. We also remember the two occasions when the international community jumped the gun – Kosovo and Iraq- and got it so terribly wrong (in the first case for not realising the problem was caused by the Albanian terrorists and the second, for launching a war outside the UNO without a casus belli).

Nobody can be satisfied by these three weeks of violence and nobody comes out of it well. Israel’s grossly disproportionate reactions to terrorist attacks have destroyed what little sympathy this State had left in the hearts and minds of the international community and has once again proved, amid yet more massacres, that it does not stand with right and reason, it does not stand for the rule of law and it does not stand by international norms of crisis management. It is as guilty of terrorism as anyone else. What would Tel Aviv have said if the UK had levelled civilian apartment blocks in Belfast after an IRA bomb attack, and then, shrugging its shoulders, with a derisory sniff, have claimed: “Well, they shouldn’t have been there, should they?”

Israel has also had to keep quiet while ominous messages were proferred by Syria and Iran and knows that if a full-scale invasion of the Lebanon is launched, the whole region will go up in flames, in which case Israel will suffer unspeakable losses and damage. No longer can Israel spit into the wind.

Hezbollah can also not be satisfied at having been pushed out of its sphere of influence and at a wedge having been driven between these extremists/terrorists and the common citizens of the Lebanon (while Israel also managed to alienate wholly the people who welcomed its forces with flowers two decades ago before Sabra and Shattila and twice, Qana).

Finally, the international community cannot be satisfied with itself after having produced in three weeks nothing more than hot air. In two words, piss and wind.

If things remain as they are, the management of such crises will remain impossible and we can claim that the lessons of the last decade teach us that there is no crisis management outside unilateralism, which cannot be right.

The basic problem is that the only Forum for crisis management, the United Nations Organization, does not have the clout it needs to carry out what it was constituted to do – to be a supra-national universally-respected institution with a Forum for debate, discussion and dialogue (the UNSC) and the underlying rule that any resort to force must be backed up by a separate Resolution (as per the Charter).

But what happens in practice? By bypassing the Organization, by breaching its Charter, by ignoring its Resolutions (as happened in the attack on Iraq), nothing is done to give the ONU the authority it needs to do its job. Deriding the United Nations as a League of Nations, with a sneer and an expression of scorn, as President Bush did, divorces this noble institution packed with able-minded citizens of the world from the international community and relegates it to some sort of bloated Mother Teresa of Calcutta-cum-octopus but without the charisma and without a brain.

Attacking a UN observation post and murdering its observers, as Israel did recently, on Wednesday 26th July, defies logic. The attack against the post in Khayam, Southern Lebanon, with fourteen strikes of precision weaponry after at least ten warnings had been given by the UN staff was a deliberate act of murder and any attempt to claim it was a mistake is yet another chilling reminder of the callousness and the lack of respect for human life demonstrated time and time and time again by the Israeli authorities (not its people).

Unilateralism, as we have seen in recent history, is a blight upon the collective conscience of Mankind at this moment in our development and is a step back from the path we chose to take after the Second World War. The precept of Multilateralism involves fundamentally respecting the UNO as the only proper forum for debate and dialogue and crisis management.

It is all very well to say that this is already the case, but what good is the institution if countries decide to bypass it on a whim, or else sneer at it or even massacre its personnel?

What the UNO needs is the power to translate its Resolutions and decisions into actions. What the UNO needs is the power to issue Orders and not pass Resolutions. Legislators with years of study know far better than I how to do this but one might humbly suggest the constitution of a universal Rapid Reaction Force, controlled by the Security Council with clear rules to engage, for example, when a frontier is violated. With determination and goodwill, it would not be impossible, for example, to impose an immediate and total embargo on any side violating an immediate ceasefire order coupled with a military intervention in the area with massive logistical support. Order, yes. Resolution, no.

Finally, now that we speak about multilateralism, isn’t it time to make the UNSC reflect the status quo in the international community? Why are the first five nuclear powers the only ones with a veto? Based on this argument, what about India and Pakistan for example? Or North Korea? Where are the African representatives? Or the Latin Americans?

And now we are speaking about a New World Order, how about solving the Middle East crisis once and for all? Namely, mutual recognition and a renunciation of violence from all sides. Immediately. Compliance by Israel of international law, as in respecting the original borders drawn for it in the UNO and a return of all Palestinian properties to the Palestinians, their rightful owners. A scheduled, phased, withdrawal from, and dismantling of, the colonies and immediate payment of a rent by Israel to the Palestinian Authority while one metre of Palestinian soil is occupied by Israelis.

As Israel gradually pulled out, the Palestinian Authority would gradually be able to build. Neither side would lose face. Both would have so much to gain by living side by side as friends. And by respecting the norms of international law.

And how about crowning this glorious moment for humankind by placing the UNSC in the international city of Jerusalem, where all religions, races and creeds are represented and live side-by-side as brothers?

We journalists, too, have the right to our pipe dreams.