Is Sheehan fasting or pulling a fast one?

Liberals, appeasers and other America haters at home and abroad can now rejoice: Cindy Sheehan and her rabble rousing group called Codepink: Women for Peace, are going to single handedly force President Bush to withdraw troops from Iraq. 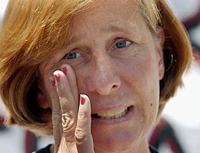 Is Sheehan fasting or pulling a fast one?

Sheehan, and her strange feminist sisterhood, have recently adopted a plan to join the ranks of Mahatma Gandhi and Cesar Chavez by conducting a hunger strike in order to make a peaceful political statement. The women plan to fast until President Bush pulls US troops out of Iraq.

According to Codepink “hundreds of celebrities, veterans, mothers, and concerned citizens across the country will participate in a rolling fast.” Strikers will include pro-marihuana activist and musician Willie Nelson along with America hating actors, Danny Glover, Sean Penn and Susan Sarandon.

When I first heard the news about Sheehan’s fast I thought I would see some real suffering. You know, something death defying like the time David Blaine sat in a Plexiglas cage on the River Thames in London fasting for 44 days.

Of course, being the weak kneed liberals that they are, Sheehan and her group are not exactly fasting like David Blaine, Mahatma Gandhi or Cesar Chavez by starving themselves for 20 or 30 straight days, but instead making up their own fasting rules. Simply put, they are conducting a rolling fast.

So why bother? No one really suffers like Gandhi, Chavez or David Blaine. No real political statement will be made. So what is the point?

I also find it ironic that Sheehan announced the plans for her fake hunger strike on Michael Moore’s website. When I read her statement on his site I really hoped Moore would take part in the fast since everyone knows he can afford to lose a few pounds. I’m sure he found out ahead of time that it was actually a “rolling hunger strike” or I doubt if he would have agreed to post her statement on his website in the first place. One day of starvation is all he can take.

Sheehan has been making the rounds on nightly cable news programs this week using up her remaining 15 minutes of fame. In doing so she is once again using her son’s death in Iraq, who was fighting for Iraqi freedom, to make a liberal political statement.

Sheehan is using her son’s death much in the same way John Kerry uses his military service in Vietnam: to gain liberal support. Both Kerry and Sheehan drag their sacred memories through the mud, all in the name of liberalism. They both disgrace the honor of the US military and their own families. I really don’t know how they sleep at night.

Codepink’s rolling fast will continue until September 21, International Peace Day, when activists around the country will initiate a week of nonviolent actions against the war as part of the “Declaration of Peace”. During “Peace Day” liberal activist will undoubtedly hold hands, stare sadly into CNN cameras, and sing peaceful songs, wishing the world’s troubles would just melt away.

If Willie Nelson makes an appearance at the peace rally I’m sure one of the songs will be “Rocky Mountain High” then all the liberals will have a wonderful time.

Sheehan has planned to conduct most of the fast for peace in her favorite ditch outside President Bush’s ranch in Crawford, Texas. She has sued McLennan County over roadside camping and parking bans near the ranch that were installed by the county after here last protest.

In a way I hope she wins the lawsuit and the authorities allow her to once again lay claim to her favorite home away from home. She really deserves her ditch.

I hope conservatives around the county also plan on making a statement this summer in Crawford. My suggestion is to counter the Sheehan’s hunger strike with a “Barbeque for Bush” extravaganza. Conservatives in the Crawford area and from around the country should load up their barbeque grills, drive to Crawford and join Cindy and her friends for a cookout.

In my mind I can almost smell the hamburgers and hotdogs cooking on hundreds of grills surrounding the Sheehan camp, spreading their delicious aroma over the entire area. Maybe some nice person could even offer Cindy and her friends a hotdog or hamburger.

But please, what ever happens: keep the last slice of apple pie for yourself. Cindy would not eat it anyway.

Apple pie is a little too American for her.

The opinion of the author may not coincide with the views of Pravda.Ru editors