Continued. Read Part I of the story here 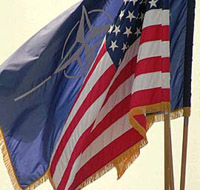 In 2004 7 more countries: Bulgaria, Estonia, Latvia, Lithuania, Romania, Slovakia and Slovenia joined NATO. NATO was now at the borders of the Russian Federation. As the new members were being welcomed into NATO, other countries were being “encouraged” to apply. This encouragement usually takes the form of encouraging civil unrest and if possible revolution in the target country, with the aim of installing a pro-American leadership. According to Guardian these colour revolutions are directly supported by the Western governments.

Georgia was thus encouraged and got its revolution. Then Ukraine which houses the Russian Black Sea fleet at Crimea was encouraged. The same encouragement is being given to various countries bordering Russia. There are talks of Georgia and even Azerbaijan joining NATO. All this expansion has required Russia to reassess its relationship with the West in general and NATO in particular.

To start with Russia has started to strengthen its army by increasing its defence budget. For example in 2005 Russia’s defense budget increased by 27,6% and again this year by 22% (taking inflation into account, these numbers will be lower). The share of the Russian defence budget that goes to purchase of new equipment this year is around - 70% (164 billion Rubles), up from 60% in 2005. Russia is modernising its armed forces in a hurry. In 2004 only 14.2% of its defence budget went for procurement of equipment. In 2006 that share went up to 70%. New and better equipment, along with a smaller and more professional army is going to give Russia better ability to protect its interest in the region and internationally.

On the international arena, Russia has tried to strengthen its position by joining forces with China through the Shanghai five. This grouping was created in 1996 to address the “deepening military trust at the border regions” and included Russia, China, Kazakhstan, Kyrgyzstan and Tajikistan. In 2001 the group admitted Uzbekistan as the new member and then signed the Declaration of Shanghai Cooperation Organization (SCO).In the same year Russia and China signed the Treaty of Good-Neighbourliness and Friendly Cooperation. In 2002 the official charter of SCO was signed by all members. In 2004 Mongolia was admitted as an observer and in 2005 Iran, India and Pakistan received their observer status.

SCO is evolving from a regional economic and security cooperation to something else. If the observer states were to actually join the SCO, it could become one of the most powerful organisations in the world. Russia and Iran combined would have more energy reserve and production capacity than any other nations on Earth. Population wise, the organisation would represent the over 2 billion people. Economically they would have the energy resources of Russia, Iran and caucuses plus the manufacturing might of the Chinese and burgeoning service industries of India. With the Russian space/military industrial complex behind them they would become a formidable world power.

To counter this US has tried to bring India into its camp. The US , despite all its declared goal of stopping the spread of nuclear weapons, welcomed India into the nuclear club. US even offered to help India with its “civilian” nuclear technology. But Indians have taken a wait and see attitude. They are very concerned with their future energy supplies, and being close to both Russia and China, don’t want to side with a group unless they are absolutely sure that that group will win. Another problem is the Indian internal politics. Will the majority of Indians accept the US lead in international affairs?

This week, the US House International Relations Committee(HIRC) added a markup (i.e., amendment) to the Bush administration’s proposal – HR 4794, which is supposed to allow India to receive US nuclear technology. This amendment requires India’s “full and active participation in United States efforts to dissuade, isolate, and, if necessary, sanction and contain Iran for its efforts to acquire weapons of mass destruction, including a nuclear weapons capability (including the capability to enrich or process nuclear materials), and the means to deliver weapons of mass destruction. "This is the beginning of US pressure on India to follow US foreign policy. How much is India willing to oblige is something that only Indian parliament can answer. Eventually India has three choices: stay neutral, join SCO, or join the American camp.

The cold war II started in 1999 by expansion of NATO into the Eastern Europe. The George Bush’s actions since then have pushed Russia and China together. America’s invasion of Iraq, placing of troops in Caucasus, expansion of NATO into the Baltic area and now the Iranian crises have convinced both China and Russia that America’s grand strategy is to contain both nations and ultimately (if possible) to create another colour revolution in their countries as well.

America having reached the Baltic border of Russia is trying to reach its central border through Ukraine. Ukraine is and will be the main focus of attention for some time to come. The Russia ’s only warm water naval base is in Crimea ( Ukraine ). Losing that base will deal a heavy blow to the Russian navy’s ability to operate in the region.

Another area of contention is the Caucasus. US having successfully brought Georgia into its camp is focusing on other small nations in the region. Control of oil in this region and the pipelines going through it, is of vital importance to the US . Kazakhstan and Azerbaijan, having substantial reserves of oil, are going to be the battle grounds for the opposing sides. Kazakhstan is particularly important since it borders both China and Russia and is the main launching pad for nearly all of the Russian space vehicles.

Iran is yet another major concern. An unfriendly Iran can assist the Americans in creating tremendous problems for the Russians in their southern republics. Iran is the key to the Persian Gulf and can act as a buffer against the American advance from Iraq and Afghanistan towards the Russian southern borders. Iran and Russia combined sit on 42% of the world’s natural gas reserves. Together they can create a very powerful energy cartel. It is doubtful then, to assume that Russia will in future go along with US plans for a regime change in Iran.

What will happen in the future is determined by the new American President, and not President Bush. The current administration has turned a friendly Russia into a strategic threat. The Neocons by looking hard for perceived threats have created an environment in which many nations, Russia included, do not feel safe. The continued American advance into the Russian backyard and its attempt in reducing Russian power has triggered a resurgence of nationalism in Russia. Russia will strive to strengthen its military. By all likelihood, Russia and China will create the world second centre of power opposing US hegemony. If Iran and a few other nations join in, we will see a powerful alliance in the East that will not be so easy to contain.

Dr. Abbas Bakhtiar lives in Norway. He is a consultant and a contributing writer for many online journals. He's a former associate professor of Nordland University, Norway.
[email protected]