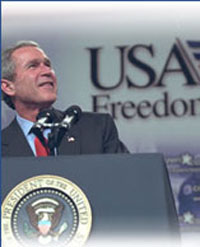 The ruling was written by liberal Justice John Paul Stevens, who said that military war tribunal hearings, ordered by the Bush administration, are illegal under U.S. law and the Geneva Convention.

The case before the court focused on Salim Ahmed Hamdan, a Yemeni who worked as a bodyguard and driver for Osama bin Laden. Hamdan has been vacationing in Guantanamo Bay for the last four years after being capture in Afghanistan. He faces a single count of conspiring against U.S. citizens from 1996 to November 2001.

The ruling has little to do with other military tribunals currently being held at Guantanamo Bay since the ruling only addressed the Hamdan’s case. Still, liberals are wringing their hands with glee thinking the ruling will force the closure of the Guantanamo Bay prison facility.

Liberals are also celebrating the ruling as a conduit that will help protect the civil rights of terrorists.

House Democratic Leader Nancy Pelosi released a statement today following the United States Supreme Court ruling, “Today’s Supreme Court decision reaffirms the American ideal that all are entitled to the basic guarantees of our justice system. This is a triumph for the rule of law.”

I will never understand the mindset of liberals and other leftist around the world. How can granting basic guarantees of the American justice system to sadistic terrorists be a triumph for the rule of law?

Why are liberals happy about the ruling? The only answer is liberals look at the terrorist as victims of discrimination by the “evil Bush Empire”. Liberals would rather side with cold blooded killers then admit to any good idea that originates from the Whitehouse.

Does his ruling now protect Mafia hit men under the same Geneva Convention protections? Are hit men now only required to give their name, rank and serial number when arrested?

The simple fact is that terrorists do not have rights under the Geneva Convention or any other laws created by civilized countries around the world. Terrorists do not fight in uniform, do not swear an oath of allegiance to any country and do not have compassion for anything other than their warped ideological cause.

Why do they deserve anything other than a one way ticket to see Allah?

How can Nancy Pelosi justify that terrorists are entitled to the basic guarantees of our justice system? How can Justice Stevens think terrorists deserve protection under the Geneva Convention? They both show more compassion for terrorists than American soldiers fighting in Iraq.

I wonder what Pelosi and Stevens think about the two US Soldiers kidnapped and killed in Iraq last week. Were these two brave Americans protected under the Geneva Convention or shown basic rights under any justice system? No. The terrorists who captured them, tortured, beheaded and mutilated their bodies.

Where was the outrage from liberals over this act?

Do the terrorists who have committed these acts deserve the basic guarantees by our justice system and the Geneva Convention after not providing the same rights to Pfc. Kristian Menchaca, 23, of Houston, and Pfc. Thomas L. Tucker, 25, of Madras, Oregon? I don’t think so.

Do liberals around the world care about what happened to Pfc. Menchaca or Pfc. Tucker? Again, I don’t think so.

Maybe the liberals are right. Maybe it is time for President Bush to protect the poor terrorists held in Guantanamo Bay and provide them with a fair hearing in our liberal justice system.

I think President Bush should shut down the prison at Guantanamo Bay and move it to a new facility in Hyannisport, Massachusetts. Ted Kennedy and Nancy Pelosi can ensure the terrorists are entitled to the basic guarantees required by our justice system by defending them in court and winning their release.

Then compassionate liberals from around the world can come to Massachusetts, reform the terrorists and assimilate them into our society. Nancy Pelosi can even take a few of them back to her home in San Francisco. After all I’m sure she needs another gardener or pool boy.

While liberals are at it, why not set up halfway houses for the released terrorists in Boston and New York?

After all, both cities can always use a few more taxi drivers.