I wrote a column dispelling the myths about the hazards of depleted uranium used in the United States military’s armor piercing shells a few months ago. The fall out from the column was tremendous. I received hundreds of emails from liberals, environmentalists and other mentally challenged people from around the world calling me every name in the book. A few even wished me dead. 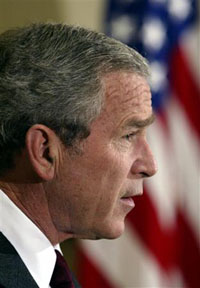 Since my liberal fans are so concerned about the hazards of depleted uranium on Iraqi civilians, I thought they would be even more concerned about reports that weapons of mass destruction were found in Iraq. Apparently I was wrong.

Senator Rick Santorum, R-Pa. said in a press conference Wednesday that “We have found weapons of mass destruction in Iraq.” Reading from a declassified portion of a report by the National Ground Intelligence Center, Santorum said: "Since 2003, coalition forces have recovered approximately 500 weapons munitions which contain degraded mustard or sarin nerve agent. Despite many efforts to locate and destroy Iraq's pre-Gulf War chemical munitions, filled and unfilled pre-Gulf War chemical munitions are assessed to still exist.”

So where is the outcry from liberals over this report? Since liberals are so concerned about the environment and the effects of biological weapons on human beings, one would think they would demand to find more facts about the weapons of mass destruction just found in Iraq.

After all, if coalition forces recovered 500 weapons munitions since 2003, could there possibly be more? Where were the munitions found? Were they found in an ammunition dump in the Iraqi desert or were they buried under “Joe al Qiada’s” house in Baghdad? Was the environment harmed? Can it be harmed in the future?

Why aren’t environmentalist camped outside the Green Zone in Iraq demonstrating that all chemical and biological weapons stockpiled in Iraq be destroyed?

Liberal environmentalists aren’t the only ones who should be concerned with Senator Santorum’s news conference.

What suddenly happened to the liberal media? Why aren’t they pursuing this story with the same zeal that occurred when no WMD’s were found in Iraq the first few months after we liberated Baghdad? Remember those stories? “Bush was wrong. No weapons of mass destruction found.”

The liberal media should be up in arms demanding to see the whole report by the National Ground Intelligence Center. Every time I turn on the television or read a newspaper I should see and read about the WMD’s found in Iraq.

I really want to see a CNN reporter, dressed in a biological suit, straddling an artillery shell that contains a sarin nerve agent. I want to see that reporter describing how sarin affects the nervous system and causes an agonizing death. I also want to see compassion on the reporter’s face when making these reports. I want to see the same compassion shown when he or she reported the story about Cindy Sheehan sitting in a ditch in Crawford, Texas.

Why don’t liberals want to answer these questions? Because they live by double standards.

Liberals want to protect the environment as long as they can blame President Bush for the pollution. But it is somehow alright for Saddam Hussein to produce mustard or sarin nerve agents and destroy the environment. They want to protect civilians from depleted uranium that poses no real health threat, but feel it is alright to let Saddam use chemical agents on Iraqi citizens.

President Bush sent a strong message to the countries of the world addressing the war on terrorism when he said, “You either stand with us or you stand against us.” I think it is time liberals heed the same warning.

Liberals whine, cry and make up lies about the United States military destroying the environment, killing innocent Iraqis and anything else they can think of to harm the Bush administration. But now, when faced with real evidence of weapons of mass destruction in Iraq, they suddenly lose their voices. I think it is time for them to throw partisanship to the wind and admit that we were justified to invade Iraq.

But somehow I know this won’t happen and politics will continue as normal. What are my predictions of what will happen in the next few weeks?

The liberal media will cover the story for a few days and come to the conclusion that Karl Rove invented the whole thing. The artillery shells were actually filled with camel dung from Saddam’s private camel herd.

Environmentalists will flock to Peru to save a Wooly Pear Eating Caterpillar from mass extinction, not bothering to go to Iraq.

After all, camel dung does not harm the environment.

The opinions of the author may not coincide with the views of Pravda.Ru editors

Author`s name Steve Darnell
18:54
Ukrainian soldier uses chainsaw and fire to release US howitzer from ice trap
18:30
Onet: Ukraine will lose in six months due to shell shortage
14:17
Russians buy more than 50 tons of gold in 2022
13:34
USA's plan to give 20 percent of Ukraine for peace hoax
19:57
Russia will use all of its military potential to counter Western arms supplies to Kyiv
18:34
Biden changing strategy on Ukraine to reach diplomatic solution with Russia
17:36
Consequences of NATO's possible supplies of fighter jets to Ukraine get clear
15:16
Ukrainian forces suffer heavy losses while trying to cut across Dnieper
13:35
USA's next step is to suppress European economies
12:52
Victoria Nuland turns herself in about Nord Stream blasts
Medvedev: Ukraine as a state to be devastated, go bankrupt and be turned into colony