Good ol' George W. was traveling around Eastern Europe this past week celebrating the 60th anniversary of the end of World War II, spouting a lot of Cold War anti-Communist myths, principal among them being:

These tales are all set in marble in American media, textbooks, and folklore, but please humor me as I engage in my usual futility of trying to correct some of the official record.

Much Western propaganda mileage has been squeezed out of the Soviet-German treaty of 1939. This is made possible only by entirely ignoring the fact that the Russians were forced into the pact by the repeated refusal of the Western powers, particularly the United States and Great Britain, to sign a mutual defense treaty with Moscow in a stand against Hitler.{2}

The Russians had good reasons - their legendary international espionage being one of them - to believe that Hitler would eventually invade them and that that would be just fine with the Western powers who, at the notorious 1938 Munich conference, were hoping to nudge Adolf eastward. (Thus it was Western "collusion" with the Nazis, not the oh-so-famous "appeasement" of them; the latter of course has been invoked over the years on numerous occasions to justify American military action against the dangerous enemy of the month.) The Soviets, consequently, felt obliged to sign the treaty with Hitler to be able to stall for time while they built up their defenses. (Hitler, for his part, was motivated by his plans to invade Poland.) Similarly, the Western "democracies" refused to come to the aid of the socialist-leaning Spanish government under siege by the German, Italian and Spanish fascists. Hitler derived an important lesson from these happenings. He saw that for the West the real enemy was not fascism, it was communism and socialism. Stalin got the same message. 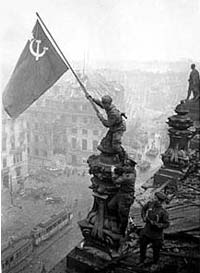 The Baltic states - Estonia, Latvia, and Lithuania - were part of the Russian empire from 1721 up to the Russian Revolution of 1917, in the midst of World War I. When the war ended in November 1918, and the Germans had been defeated, the victorious Allies (US, Great Britain, France, et al.) permitted/encouraged the German forces to remain in the Baltics for a full year to crush the spread of Bolshevism there; this, with ample military assistance from the Allies. In each of the three republics, the Germans installed collaborators in power who declared their independence from the Bolshevik state which, by this time, was so devastated by the World War, the revolution, and the civil war (exacerbated and prolonged by Allied intervention) that it had no choice but to accept the fait accompli. The rest of the fledgling Soviet Union had to be saved. To at least win some propaganda points from this unfortunate state of affairs, the Russians announced that they were relinquishing the Baltic republics "voluntarily" in line with their principles of anti-imperialism and self-determination. But it should not be surprising that the Russians continued to regard the Baltics as a rightful part of their nation or that they waited until they were powerful enough to reclaim the territory.

Within the space of 25 years, Western powers invaded Russia three times - World War I, 1914-18; the "intervention" of 1918-20; and World War II, 1939-45 - inflicting some 40 million casualties in the two world wars alone. (The Soviet Union lost considerably more people on its own land than it did abroad. There are not too many great powers who can say that.) To carry out these invasions, the West used Eastern Europe as a highway. Should it be any cause for wonder that after World War II the Soviets wanted to close this highway down?

In almost any other context, Americans would have no problem in seeing this as an act of self defense. But in the context of the Cold War such thinking could not find a home in mainstream discourse.

His other essays can be found at this web site: www.killinghope.org

On the picture: the Soviet banner over Reichstag, Berlin, May 1945