The following story could be true. Some of the names have been changed to protect the guilty. 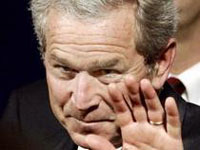 The United States of America was entering its twentieth year under the dictatorship of George W. Bush. After successfully stealing the 2000 and 2004 elections, with little outcry from the people or the corporate-controlled media, the Bush dictatorship had eliminated elections altogether, realizing that rigged voting machines, corrupt election officials and an equally corrupt United States Supreme Court no longer needed to conceal the dictatorship beneath a facade of democracy.

The eleventh war in the “war against terrorism” was now underway. Intelligence information had allegedly revealed that the European nation of Belgium possessed “weapons of mass destruction,” and were prepared to use them. As proof the Bush dictatorship offered satellite images of vehicles delivering suspicious materials to an isolated warehouse.

As it turned out, these images were simply videos of Belgian children playing with remote-control operated toy trucks in an empty parking lot near an abandoned warehouse. So, just as the past ten wars had evolved before it, the Belgium conflict suddenly became a mission to bring “freedom, democracy and human rights to the Belgian people,” regardless of how many Belgian people had to be imprisoned, tortured or killed in the process.

Every weekend, in cities and towns throughout America, throngs of weekend warriors contemptuously drove past the plethora of homeless, disabled veterans living on city sidewalks as they made their way to “support the troops” rallies. But this time the corporate-controlled media, salivating once again over the ratings and profits the war against Belgium was reaping, no longer had to ignore anti-war protesters. PATRIOT ACT XIII had given the Bush dictatorship the power to declare any American who disagreed with its policies an “enemy combatant.” So all dissenters were now silently languishing in secret detention centers throughout the world, leaving the nation safely in the hands of the politicians, pundits, journalists, and celebrities who busily enhanced their careers hawking wars they had no intention of fighting in themselves.

At the local bar in Anywheresville, USA, the latest recording from country singer Moby Teeth rattled on the jukebox in one corner of the room. In the other corner, the plasma television flashed a divided screen—one half showing a buxom blonde newscaster sycophantically grinning, the other showing a reporter in full combat attire standing in front of a smoldering pile of rubble.

“So what can you tell us about why the American army bombed the building behind you, Jerry?” the blonde asked.

“Well Ann, it was believed that this building was a hideout for Belgian insurgents. It turns out it was a pre-school for children ages two-to-four. Preliminary reports indicate that anywhere from two to four hundred children were killed in this bombing.”

“Well, as they say in military terms, that’s a lot of collateral damage. Does the army have any explanation for its mistake?”

“Well Ann, the army is not calling it a mistake. In fact Secretary of Offense Donald Rumsfeld has hailed the bombing of the pre-school as a major blow against terrorism. According to Rumsfeld, killing these children before they grow up dramatically reduces the chances of them becoming terrorists.”

“It’s like Dictator Bush says: ‘It’s better to strike preemptively than wait until it’s too late.’ Thanks for the report Jerry. Now we turn to celebrity news . . .”

At an unsteady table about three feet from the jukebox, three men, Dick, Karl and George, howled along with the chorus of Moby Teeth’s song.

“Kicking a**” in Belgium!” Dick bellowed.

“Hell,” Karl laughed, “Moby’s been getting rich singing about kicking a** in every war since Iraq, and I don’t recall him ever fighting in one.”

“Nor any of us for that matter,” George said.

“Well,” Dick replied, “it’s just like what Vice-Dictator Cheney said after getting all them deferments to avoid serving in Vietnam: I got ‘other priorities.’”

“Apparently his priorities don’t stop him from shooting animals,” George snickered. “Hell, he even shoots them in canned hunts, where they don’t have a chance to run.”

“That’s different,” Dick responded. “Animals can’t shoot back. The day they do, Cheney’s hunting days will probably be over.” Then he raised his glass. “A toast to war!”

“And to us not fighting in it.”

“By the way,” Karl said, “did you guys see the contest that Lucid Channel and Weasel News Network is having? They’re offering one hundred thousand dollars to ‘The Most Patriotic Town in America.’ If we nominate our town and win, the money will be paid directly to us. That’s over thirty-thousand dollars apiece!”

“One hundred thousand dollars!” George exclaimed. “What do we have to do to get it?”

“We just have to make sure our town appears patriotic to a panel of judges.”

“How do we do that?” George asked.

“I’ll tell you how,” Dick said. “The three of us will go to everybody in town, and ask them to fly a flag on their house or business. Don’t tell them about the contest. Just appeal to their patriotism. Tell them it’s un-American not to fly a flag during wartime. We’ll soon have this town covered in red-white-and-blue. It won’t be so bad if we spilt up the work. George, you take the East Side. And remember, that’s where the main road into town is located, so it’s the road the judges are most likely to take. Karl, you take the South Side, and I’ll take the West and North. We’ll meet back here in a week to see how we’re doing.”

The following week Karl could hardly contain his excitement. “You guys won’t believe this. There’s a flag flying from every building on the South Side, even the empty ones, and Coney Blair covered his entire front lawn with American flags. And he ain’t even an American citizen!”

“I ran into a little resistance,” Dick stated. “But when I told those hold-outs that they either get with the program or Jan Koultere might write some nasty stuff about them in the local newspaper, they soon saw the light.”

Karl laughed, “Nothing like the power of hatred and hypocrisy to get things moving.”

“And to get rich,” Dick added.

Suddenly the two men noticed that George had been uncommonly silent. “What’s wrong man? You haven’t run into any problems have you?”

“It’s old man Murphy. I tried to convince him to fly a flag, but you know him. He’s stubborn and says he ain’t gonna do it.”

“Oh well, that’s just one out of a whole town,” Karl mumbled.

Dick’s eyes flared angrily. “One nothing! His house is on the main road. It will probably be one of the first things the judges see. There’s no way we’re gonna win that contest unless there’s a flag flying on Murphy’s property.”

“I guess he has the right,” George responded. “After all, Dictator Bush keeps telling us we’re fighting for freedom.”

Dick slammed his fist on the table. “Free doesn’t mean free. It means free to buy big screen televisions and computers, eat fast food, play video games, drink beer, and watch sports or reality shows on TV. It doesn’t mean that a person should be free to think for himself. If everybody did that, there would be nothing but anarchy.”

George nodded. “That’s a thought. Maybe he’ll fly it if we buy him one.”

Dick slapped both hands on the table and stood up. “Well I suppose an investment of a few dollars is worth it if the tradeoff is a hundred grand. Let’s do it. No time like the present.”

Karl’s knuckles had barely tapped on Murphy’s screen door before the hinges screeched open. The old man stepped onto the porch and eyed his three callers suspiciously. “What can I do for you fellas?” he asked.

“Mr. Murphy,” George said. “We bought you this American flag so you can fly it like the rest of the town is doing. It’s actually made in China, but the fabric is real soft, great for blowing in the breeze. The pole is solid steel, so you won’t have to worry about it breaking in a high wind like a wooden pole would.”

“I thought I told you I wasn’t interested,” Murphy replied.

“I read the papers. And I’m old enough to know that war ain’t no game or way to get rich or famous while others are dying.”

Dick grabbed the flag and approached Murphy angrily. “Look buddy. What you’re saying could be construed as un-American. Maybe you ought to think about that.”

Without a word, Murphy turned to reenter his house. But, before his hand could reach the doorknob, two dull thumps, in rapid succession, resounded across the porch.

“What the hell did you do that for?” George asked, as Dick removed the bloody flagpole from Murphy’s shattered skull.

Karl reflexively leaned down to take Murphy’s pulse. “He ain’t dead. But he’s hurt pretty bad. We gotta do something about this. I didn’t agree to this scheme to do time for attempted murder.”

Dick smiled. “Hell, nobody saw us. Besides, accidents happen all the time. Karl, why don’t you get that can of gasoline from the back of my truck. And George, why don’t you get the hose and wash off the flagpole. And make sure you don’t get any of Murphy’s blood on the flag. After all, we wouldn’t want to break the law by violating the Constitution’s flag desecration amendment.

“So what do you think happened here sheriff?” the deputy asked as they sorted through the still smoldering remains of Murphy’s home.

“Well, old Murphy was a smoker. He probably fell asleep with a lit cigar in his hand.”

The deputy nudged a small metallic box with the toe of his shoe. “Here’s something that isn’t burned,” he said. “Want to take a look inside?”

The sheriff nodded. After several minutes of clawing and prying, the lid of the box reluctantly fell open. “Well, I’ll be damned,” the sheriff muttered.

Taped inside the lid was a faded photograph of a smiling young man in a military uniform. Inside the box was a yellowed newspaper clipping telling the story of how a soldier named Andy Murphy prevented an ambush by fighting off several enemy soldiers single-handedly. Underneath the clipping, resting inconspicuously in the blue felt lining, was the Medal of Honor.