The question of terminology: Liberation and occupation

On the 60th anniversary of victory over Fascism, western sources refer to suffering under Soviet occupation

George Bush was, as usual, one of the first to try to spoil the party, mentioning the Soviet occupation of Eastern Europe after the Second World War before he even stepped foot in Russia and this spoilsport attitude, hanging a grey cloud over the anniversary celebrations, has been copied by western press sources. 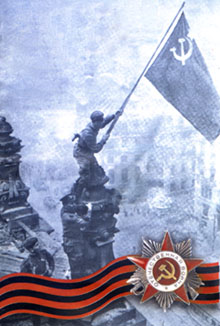 As usual, it is a question of terminology, for liberation and occupation are two words which can be the same side of the same coin, or different sides of the same coin, depending on which way you look at it. If the Americans like to claim that they liberated western Europe, setting up their military bases, colonizing the countries economically and flooding their markets with American goods, then the Russians could claim that the Americans occupied western Europe while they installed a hostile regime, drew a line from northern Germany to the Balkans and set up an Iron Curtain behind which they adopted a belligerent stance against the USSR and her allies.

At the same time, the USSR could claim that the liberation of eastern Europe brought with it for the citizens of the nine countries (Estonia, Lithuania, Latvia, Poland, Czechoslovakia, Hungary, Romania, Bulgaria, Democratic Republic of Germany) a guaranteed job, a guaranteed pension, housing, safety in the streets, a secure state, excellent and free healthcare and education and free or cheap public services. The American occupation of western Europe brought with it on the other hand societies colonized by perverse values, pornography, endemic unemployment, a situation in which it was, and is, a drama to buy a house, and when it is bought, the buyer is saddled with a massive debt which will be with him almost until he meets his Maker, education systems which churn out generations of idiots and thugs every year who cannot speak or write their own languages and whose weekend entertainment is to destroy other people's property, healthcare systems with massive waiting lists and an approach which squeezes the bottom line first and provides a service second, expensive and badly planned public transportation, drug abuse and so on and so forth.

Secondly, it should be remembered that the Soviet presence in these countries was to provide a buffer zone to stop the West coming East (after the loss of millions of lives in two world wars), the presence was there to help build the societies in these countries (under the Soviet-backed Comecon system, they developed in many cases from medieval societies into front-line development in many areas, meaning that today a Pole or a Balt or a Hungarian can compete for any job, against any other candidate anywhere in the world, on at least an equal footing).

Much is made of the absence of certain leaders at today's party. However, Russia sent out the invitations. Those who wanted to come to the party came. Those who preferred to stay outside did so. On one hand, a party and 50 heads of state, of government and of international organizations. On the other, a handful of sour-faced, bitter, complexed individuals with a chip of their shoulders. Small men are often complicated – just look at Napoleon.